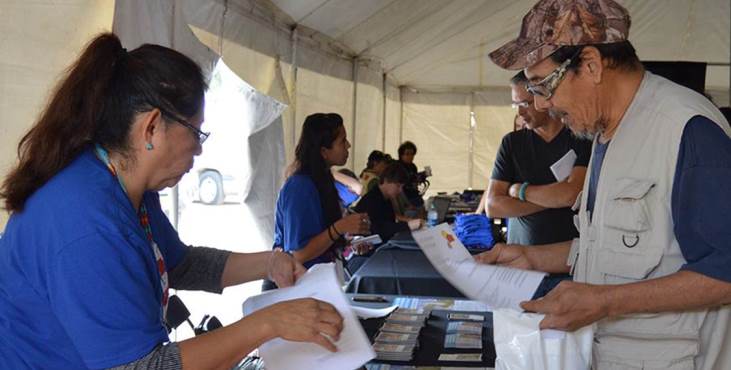 Throughout 2018, VA is launching a nationwide campaign to roll out Veteran disability enrollment claim events collaboratively with 20 tribal communities.  The campaign, titled “Your Service. Our Mission: Bringing Benefits Home” kicks off March 21 in Navajo Nation. Tribal communities in 11 states have already confirmed their participation.

“This nationwide outreach campaign will focus on identifying and assisting Veterans across Indian Country to come and fill out disability and pension claims,” said Thayer Verschoor, executive director of VA’s intergovernmental affairs.

VA realizes that reaching these Veterans could have a direct, tangible impact on their lives and that of their families.

“We appreciate the participation of our 20 tribal communities who have shown interest,” said Stephanie Birdwell, director, VA’s Office of Tribal Government Relations.  “This helps VA enhance and improve the experience for all Veterans and their spouses. We are hopeful as word spreads and tribal communities see the benefit from these events, requests to schedule more will occur.”

“VA’s Benefits Assistance Service is working hand in hand with tribal government leaders to roll out these claims events,” said Mike Frueh, chief of staff, VA’s Veterans Benefits Administration. “With the focus on Veterans and their widows with presumptive disabilities and those who are pension eligible, VA is hopeful we can help Indian country Veterans access the full range of benefits they have courageously earned through their service.”

A full list of the 20 tribal communities currently scheduled for claim clinics in 2018 are:

“Many tribal Veterans and families may not realize VA presumes that certain medical conditions are related to military service, although these conditions may first appear after discharge,” said Frueh.  “In addition, spouses may be eligible for certain benefits when a Veteran dies as a result of what VA calls presumptive disabilities.”

VA will have staff on hand to review claims on the spot, with the goal of completing the claim same day.