Home / Guest Posts / From Merchant Marine to veterinarian, one life led to another for a WWII Veteran

From Merchant Marine to veterinarian, one life led to another for a WWII Veteran 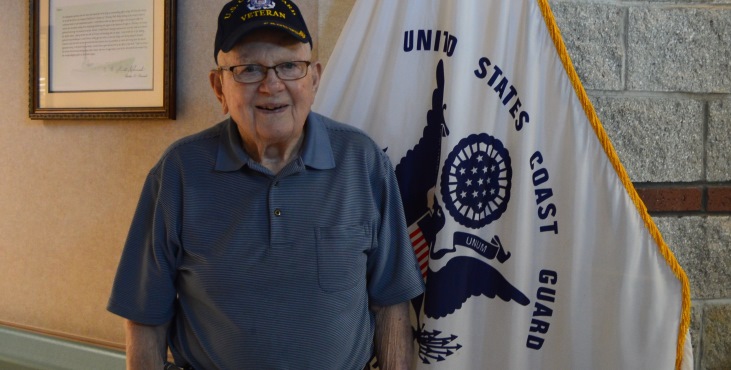 “I ain’t no hero, but I did my time,” says former U.S. Merchant Marine, Coast Guardsmen and Army Soldier John M. Rust.

And time he did. His voyages while in service to our country led him to unknown training facilities, all across the Atlantic Ocean, and with a unique skill set.

He was selected for training as a warrant radio electrician and attended six months of training at the Maritime School on Hoffman Island, New York. Upon completion of his training, he obtained a second class telegraphers license.

During that time, he learned Morse Code which he says was drilled in his brain pretty solidly because, at 91 years young, he still remembers the code and occasionally communicated with his granddaughter that way. Morse code is a method of transmitting text information as a series of on-off tones, lights or clicks that can be directly understood by a skilled listener or observer without special equipment. It is named for Samuel F. B. Morse, an inventor of the telegraph.

Rust was activated in Feb. 1945 and sent to Santa Catalina Island, one of California’s Channel Islands, for six weeks of boot camp.

It is not widely known, but soon after the U.S. entered World War II on Dec. 7, 1941, authorities declared the island a federal military zone and Catalina’s tourism-dependent economy ground to a halt.

In response, the island reinvented itself as a training camp for spies, commandoes, Merchant Marines, Coast Guard recruits and other uniformed service members. Vacant hotels became barracks. Empty marinas, yacht clubs and even the Chicago Cubs’ spring training ballpark were transformed into simulated war zones. That island is where Rust trained.

One of his most noteworthy accomplishments, which he attained at the age of 18, was becoming the sole communicator aboard the SS Harold L. Winslow. The Winslow was a Liberty ship, which was a type of mass-produced cargo ship built to inexpensively meet the United States maritime transport needs during WWII.

During that challenging but rewarding time, Rust set sail all across the Atlantic to places like Belgium, Germany and England.

In the summer of 1946, Rust joined the SS Henry War Beecher doing the same type of job and continued sailing across the Atlantic.

He did a great job there and was selected to attend Officer Candidate School. Unfortunately, his younger brother, who was a U.S. Marine, was killed in Korea while he was in training. “That devastated me for the rest of my life,” he says of the news.

Rust, by then a Second Lieutenant, served as a communications officer at the battalion level for three years. Finally, he joined the T-2 Tanker SS Steens Mountain and sailed Coastal and South American runs until the summer of 1948 when he was honorably discharged from the military.

After his military career, he went back to school and became a veterinarian. Rust loves animals and built a very successful practice caring for them for decades afterwards.

He married the love of his life at the age of 25. They were together for 30 years and had four children together.

Rust has been living at Louisiana’s Southwest Louisiana Veterans Home for about two months and he says his arrival there was a “fortunate happenstance.” He’d been struggling on his own for a while and decided to visit Jennings, Louisiana, a few months back. “I found my home here.”

Alejandra “Alex” Juan serves as both the communications director and state women Veterans outreach coordinator for the Louisiana Department of Veterans Affairs. She and her husband are both Air Force Veterans and the proud parents of two sons..