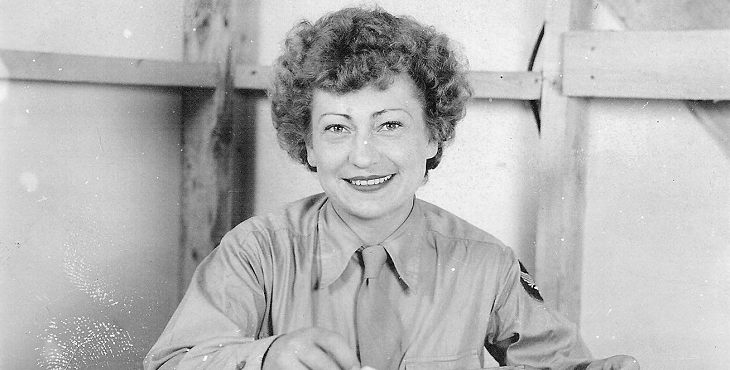 Photograph of Pfc. Rose F. Puchalla in her Army uniform.

Pfc. Rose F. Puchalla was one of the nearly 150,000 women who served in the Women’s Army Corps during World War II. Her service contributed an important part to both the war and the future generations of women in the military. In recognition of Women’s History Month, the National Cemetery Administration honors the service and sacrifice of Pfc. Puchalla and the thousands of other women who served during the war.

On April 13, 1944, Puchalla enlisted in the Women’s Army Corps, a newly established branch of the U.S. Army. For the first time, the Army allowed women to serve in hundreds of occupations other than a nurse. The Women’s Army Corps proved to be a very valuable addition to the Army. General Dwight D. Eisenhower praised the servicewomen for their “immeasurable efficiency, skill, spirit and determination.” These early servicewomen laid the foundation for the opportunity of greater military service for future generations of women.

The Army assigned Puchalla to the 1202nd Army Air Force Base Unit. She arrived in West Africa in November 1944 with 158 other servicewomen. The Gold Coast in West Africa served as a major source of supply for the Allies during World War II. Puchalla served alongside several other women during her time there. Though no combat occurred in the region, it served as an important part to winning the war.

After the Allied victory in Europe in early May 1945, the Army reassigned the women of the 1202nd. Puchalla boarded a flight with 17 other servicewomen headed to Liberia on the morning of May 30, 1945. Two hours after departure, Army communications at Roberts Field, Liberia received distress signals from the flight before going silent. Puchalla’s flight never reached its destination.

The Army conducted continuous searches for the plane but never located it. By June 21, 1945, the Army presumed that the likelihood of any surviving passengers was low. The incident is believed to be the largest single loss of life of servicewomen during World War II.

Pfc. Rose Puchalla is commemorated on the Tablets of the Missing at the North Africa American Cemetery, Carthage, Tunisia.

Today, Puchalla and all others aboard her flight are remembered on the Tablets of the Missing at the North Africa American Cemetery in Tunisia.

Understanding Sacrifice is an educational program by the American Battle Monuments Commission and National Cemetery Administration in partnership with National History Day and the Roy Rosenzweig Center for History and New Media at George Mason University. To learn more about the Understanding Sacrifice program visit https://abmceducation.org/

To learn more about the Veterans Legacy Program and their other partnerships please visit https://www.cem.va.gov/legacy/

Please join us in recognizing the service and sacrifice of Pfc. Rose F. Puchalla. Read her biography, hear her eulogy, and view the lesson plans developed around her legacy here: https://abmceducation.org/understandingsacrifice/soldier/rose-puchalla