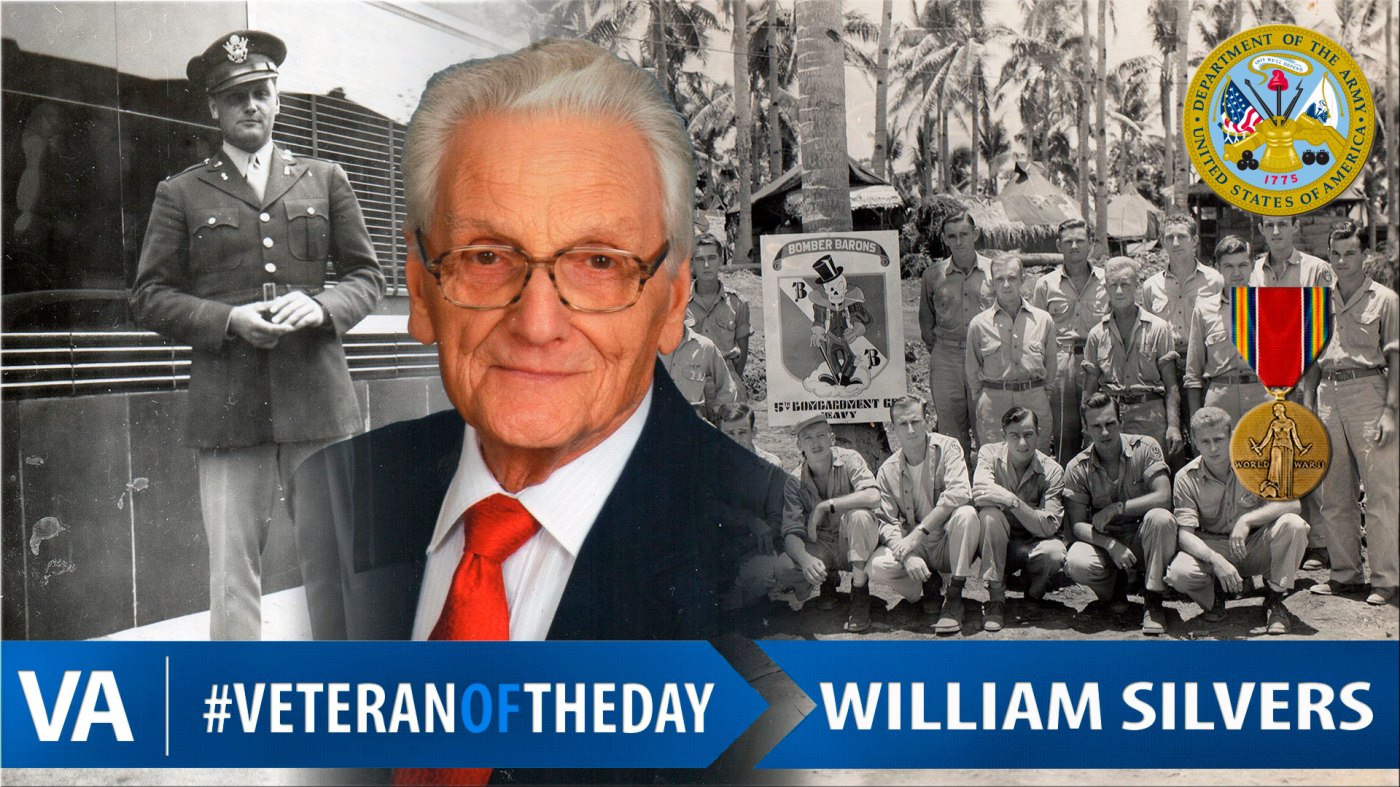 Today’s #VeteranOfTheDay is Army Veteran William R. Silvers. Bill served during from 1942 to 1980 in active and reserve status.

Bill attended Iowa University in Iowa City, where he attended full-time leading up to his departure for the military. In February 1942, Bill was inducted into the Army at Fort Des Moines, Iowa. Bill attended basic training at Aberdeen Proving Ground in Maryland; and in September 1942, he went to Officer Candidate School. On December 18, 1942, Bill was discharged from enlisted status as a second lieutenant and entered active duty on December 19.

Bill served at the Army Air Base in Salt Lake City, Utah; Fort George Wright in Washington; and Smoky Hill Army Air Base in Salina, Kansas, serving in the Airdrome Squadron Ordnance. After, he went to Camp Williams Airdrome Camp in Douglas, Wisconsin, before being deployed in June 1943 from San Francisco. He spent more than 30 days on the water. He landed on Efate in the New Hebride and was assigned to recover U.S. bomb that had been randomly distributed through the jungle. After Efate, Bill moved to Munda in the New Georgia group of islands, where he was the Ordnance Officer of the 14th Airdrome Squadron. The squadron was servicing the 826th Bombardment Squadron B-24s also stationed on the island.

In August 1944, Bill was transferred to the 72nd Bomb Squadron in the 5th Bombardment Group, part of 13th Air Force on Los Negros Island in the Admiralty group of islands. Here, Bill rode along on several combat missions. In May 1945 during a mission off the coast of Borneo, the #3 and #4 engine quit. The crew were given orders to bail and aborted to the water. When another crew member could not swim, Bill rescued him and waited four hours before being rescued by the Navy PBY.

In December 1945, Bill accepted appointment to Officer Reserve Corps. When he returned home, he continued work on his farm and returned to college in fall 1946. Bill served for five years in the reserves and was promoted to Lt. Col. in 1962.

In January of 1971, he was removed from active reserves status and assigned to the control group retired. On June 25, 1980, he officially ended his association with the U. S. Army.

Bill currently resides in Salt Lake City, Utah, where he continues to seek new and challenging adventures. He has since participated in skydiving, visited Alaska twice and climbed Cape Hatteras Lighthouse. This June, Bill will turn 98. He is planning a trip back to the Outer Banks, hoping to climb a few more lighthouses.