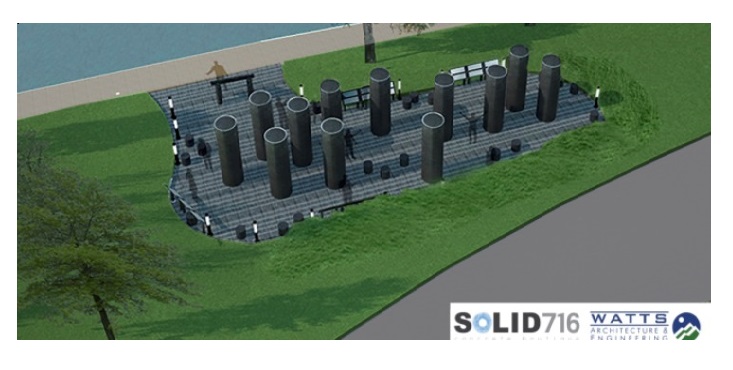 By Veterans Day 2018, Buffalo, New York, will be home to the United States’ first monument that honors all African-American Veterans.  The African-American Veterans Monument, to be located at the Buffalo & Erie County Naval and Military Park, will recognize the contributions of African Americans who have served and are currently serving in all five branches of the military, during war and in times of peace.  African Americans have fought in all 12 of the United States’ military conflicts since the country’s first, whether they enlisted voluntarily or were drafted.

A committee of local African-American Veterans, African-American historians, Watts Engineering and Uniland Development have led the planning for the monument with the support and convening of the office of Assemblywoman Crystal Peoples-Stokes.

“We are humbled to work alongside the tireless volunteers whose idea it was to establish the first monument of its kind right here in Buffalo,” said Peoples-Stokes. “The contributions of African Americans to the country’s military is an understated piece of history that my office has committed itself to shedding light on. In partnership with the Buffalo & Erie County Naval Park, the city, the county and my colleagues in the assembly and senate, we are excited to announce this project to the community and look forward to its completion.”

The design of the African-American Veterans Monument is a matrix, serving as both a timeline and map of longitudinal coordinates. Each of the 12 black concrete pillars that will be 10 feet tall, and 3 feet wide, are placed in a chronological sequence, corresponding to the dates that each of the country’s 12 military conflicts took place. The matrix’s longitudinal coordinates represent the location where the war began. The spacing between the pillars represent peace times between each war.

The tops of the 12 black concrete pillars will illuminate, representing the candles that families would put in their windows as a beacon to guide a soldier home. The light emanating from the top of each pillar will continuously glow as an eternal reminder of the commitments made by African-American Veterans.  The Monument’s design was created by Solid 716.

“This is a project the African-American community has talked about for years, said Warren Galloway,” chair of the African-American Veterans Committee and Veteran of the Air Force.  “The Erie County Chapter of the Links started with an exhibit that has recorded the names of deceased African American Veterans that lived in Western New York.  From that project, the idea for a monument was birthed and our committee was formed under the leadership of Assemblywoman Crystal Peoples-Stokes.  We are excited to announce the plans to the community.”

Construction of the monument will begin in the spring once the total budget for the project is raised.  The community can honor a Veteran through the purchase of an engraved brick paver that will line the walkways of the monument for $250. For more information visit aavmwny.org.

About the authors: Daphne Ross and Aziza Abdul-Alim are consultants for the African American Veterans Monument Committee.