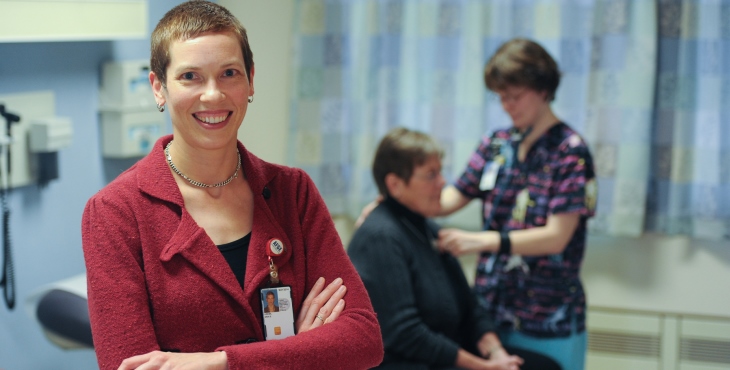 VA Research Quarterly Update asked Krebs for her thoughts on the media attention her study has received, and where she thinks future research efforts will be focused.

Your study has received lots of media attention; have you begun to see any effects on clinical applications or guidelines within VA or the public sector? Do you think the results of your study are influencing prescribers?

Although it’s a bit too early for our study findings to be incorporated into guidelines, I have heard from many individual clinicians that this study has influenced their clinical practice and teaching of trainees. I expect our results to be interpreted as providing support for recent guideline recommendations. The 2016 Centers for Disease Control and Prevention opioid guideline advised that non-drug therapies and non-opioid medications are preferred for chronic pain, and the 2017 VA opioid guideline advised against starting long-term opioids for chronic pain. These recommendations were based on expert opinion and data about opioid-related harms. Our study contributes long-term evidence on the benefit side of the equation—we found no advantages to opioids that would outweigh their greater risk of serious harm. The results should reassure clinicians that following current guidelines is not likely to result in undertreatment of pain.

You have been very clear about the limitations of your study in the journal article itself and in any interviews you’ve done—that it looked only at a certain population of pain patients. Nonetheless, have you received any criticism from pain-treatment advocates who are concerned that your study may deter some physicians from prescribing opioids even when they are truly indicated? If there has been such criticism, do you believe it may have been fueled to some extent by misleading media reports that over-sold the results or interpreted them too broadly?

Misleading media reports about the study’s findings (e.g., The New York Times “Well” story “For Arthritis Pain, Tylenol Works as Well as Opioids”) generated a lot of confusion and questions from patients and caregivers. My experience with advocates criticizing SPACE (trial) is similar to what I experienced when I participated in the 2016 CDC opioid prescribing guideline development process. In both cases, social media and internet-based criticism focused on claims that the work was biased and therefore illegitimate. I suspect this type of criticism is fueled less by misleading media reports than by misleading industry-supported advocacy. We would all benefit from a more nuanced discussion of long-term opioid prescribing that acknowledges the many remaining uncertainties. We certainly know much less about benefits and harms of long-term opioids for chronic pain than we know about most other commonly used medications.

We chose to compare opioids to non-opioid medications because this seemed to be the most direct and relevant comparison. I’m not sure a head-to-head comparison of opioids versus non-drug therapies would be as useful, since medications and non-drug therapies are typically combined in clinical practice. I’m currently leading a multi-site VA trial—funded by the Patient-Centered Outcomes Research Institute—that is testing approaches to improving non-opioid pain management while reducing opioid doses in patients with persistent pain despite long-term high-dose opioid therapy. This study, the Veterans Pain Care Organizational Improvement Comparative Effectiveness Trial, is comparing two primary care-based collaborative care interventions: lower-intensity pharmacist telecare versus higher-intensity integrated pain team care.

About the author: Erica J. Sprey is a writer in VA’s office of Research and Development. She is also the editor of  the VA Research Quarterly Update, a digital publication that is produced four times a year.