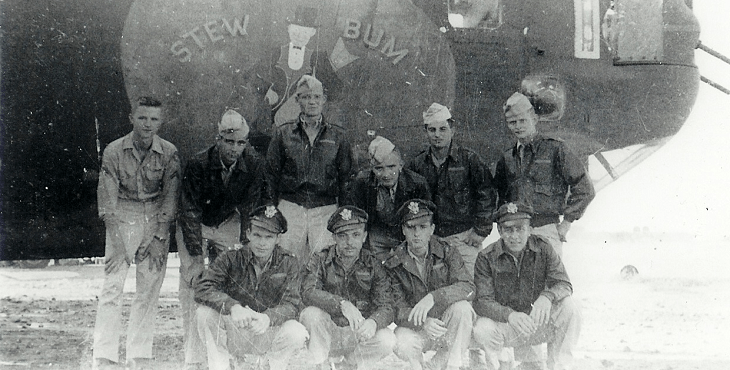 2nd Lt. Sidney Jacob Malatsky served as a bombardier in the European Theater during World War II. He was born and raised in Chelsea, Massachusetts. His Jewish parents immigrated from Russia in 1900.  As a student, Malatsky achieved a number of scholastic achievements before graduating from Chelsea High School.

Malatsky enlisted in the United States Air Corps Reserves on November 13, 1942. He served in the 827th Bombardment Squadron, 484th Bombardment Group. In 1944, the 484th supported the advance of Allied forces towards Rome by bombing infrastructure in the area.

In November 1944, Malatsky and his crew departed from Torretta Air Field, Italy on a bombing mission towards Vienna, Austria. During the mission, enemy fire hit Malatsky’s plane and caused the engine to fail. The damage to the plane forced the captain to attempt a crash landing in the Adriatic Sea.

Upon crashing into the sea, the plane broke apart and the rear of the plane rapidly sank below the water. Malatsky and 5 other crewmen were never recovered. The pilot survived the crash and submitted the Missing Air Crew Report, declaring that Malatsky had died during the landing. He was 22 years old.

Today, Malatsky is remembered on the Tablets of the Missing at Florence American Cemetery and Memorial in Italy. He is also memorialized at Florida National Cemetery in Bushnell, Florida.

Last year the Veterans Legacy Program partnered with University of Central Florida to conduct research on Veterans interred at Florida National Cemetery. During their research, a student discovered Malatsky’s story and produced a biography to honor his legacy. His story is now shared with the public, and can be found here.

To learn more about the Veterans Legacy Program, and its efforts to carry on the the stories of Veterans interred in national cemeteries please visit https://www.cem.va.gov/legacy/

We honor the service and sacrifice of 2nd Lt. Sidney Jacob Malatsky, ensuring that his memory never fades and that his legacy never dies.