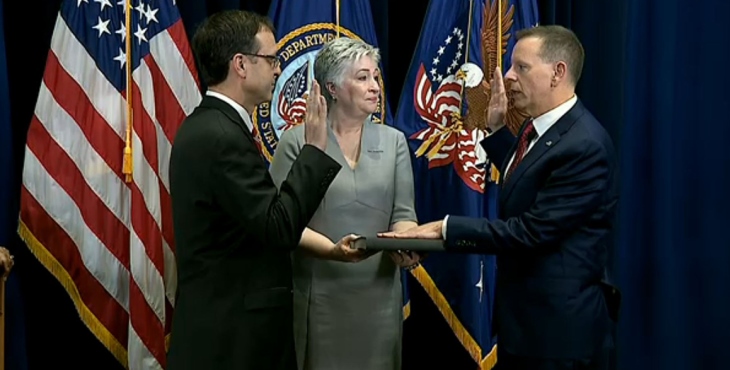 Paul Lawrence, Ph.D., was sworn in as VA’s new Under Secretary for Benefits on June 12.

As under secretary, he will oversee and lead the Veterans Benefits Administration in administering VA’s programs that provide financial and other forms of assistance to Veterans, their dependents and survivors

“I am honored and humbled to be able to help serve our nation’s Veterans,” Lawrence said. “We are indebted to them for their sacrifices, and owe them nothing less than to ensure they get the benefits they have earned.”

Growing up in a military family, Lawrence learned early the honor and respect due to our nation’s Veterans. He served in the U.S. Army, where the former captain graduated from the Airborne School.

His father was a combat Veteran, who served in Korea and Vietnam and is buried in Arlington National Cemetery.

“My dad was incredibly proud of his service and the men and women he served with. I can best honor his memory by working as hard for our Veterans as he would expect,” Lawrence said.

Lawrence has 30 years of experience working closely with federal leaders as a senior management consultant. Prior to his confirmation, he served as vice president at Kaiser Associates.

Although it is early in his tenure, Lawrence has already identified his top three priorities for driving VBA forward:

“There have been a number of improvements in recent years in way we deliver benefits to Veterans,” he said. “I look forward to working with our VBA team, the Board of Veterans’ Appeals, Veterans service organizations and congressional representatives to ensure we continue the forward momentum. We must never forget that we are here to serve Veterans and their families.”