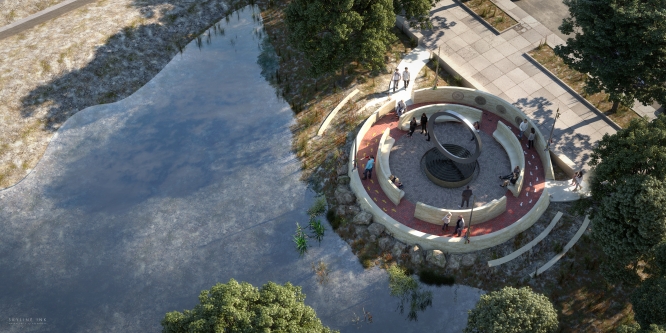 This article includes excerpts from the press release issued by the Smithsonian’s National Museum of the American Indian, which is available here.

The jury for the Smithsonian’s National Museum of the American Indian, National Native American Veterans Memorial has unanimously selected the design concept submitted by Harvey Pratt titled, “Warriors’ Circle of Honor.” Groundbreaking for the memorial is slated for September 21, 2019. It is slated to open late 2020.

“Through meeting thousands of Native American Veterans, I learned most of all about the commitment these Veterans have to the well-being of the United States,” said Kevin Gover, director of the museum. “These Veterans are perfectly aware that they are serving a country that had not kept its commitments to Native people, and yet they chose—and are still choosing—to serve. This reflects a very deep kind of patriotism. I can think of no finer example of service to the United States and the promise it holds.”

Harvey Pratt, the designer whose concept was selected to create the Smithsonian’s National Native American Veterans Memorial for the National Museum of the American Indian is a Cheyenne and Arapaho tribal member. He is a U.S. Marine Corps Veteran who served in Vietnam. Photo by Neil Chapman, courtesy of Harvey Pratt

Native Americans serve at a higher rate per capita than any other population group. Few outside the military and American Indian Nations know that Native people have served in the U.S. Armed Forces since the American Revolution and continue to serve today. The nation’s capital is known for its grand monuments and solemn memorials, including many honoring the nation’s Veterans. Yet no national landmark in Washington, D.C., focuses on the contributions of American Indians, Alaska Natives and Native Hawaiians who have served in the military since colonial times.

Pratt, who is Cheyenne and Arapaho, is a multimedia artist and recently retired forensic artist, as well as a Marine Corps Vietnam Veteran. His design concept is a multisensory memorial. An elevated stainless steel circle rests on an intricately carved stone drum. Listen to Pratt describe his design concept in detail. The selected design will undergo further development in partnership with the museum.

VA’s director of tribal government relations, Stephanie Birdwell, was a juror on the panel selecting the final design.

Congress commissioned the museum to build a memorial that gives “all Americans the opportunity to learn of the proud and courageous tradition of service of Native Americans in the Armed Forces of the United States.”

“This memorial will be an enduring tribute to the sacrifice, service, stories and experiences of Native American Veterans,” Birdwell said. “As jurors, we carefully reviewed a competitive applicant pool of design submissions and by unanimous consent, agreed that Harvey Pratt’s design will achieve these goals and will serve to honor the generations of Native American men and women who served our country in the past, present and future.”

About the National Museum of the American Indian

The National Museum of the American Indian is committed to advancing knowledge and understanding of the Native cultures of the Western Hemisphere—past, present and future—through partnership with Native people and others. To learn more about the museum’s mission, visit AmericanIndian.si.edu.

This article includes excerpts from the press release issued by the Smithsonian’s National Museum of the American Indian, which is available here.