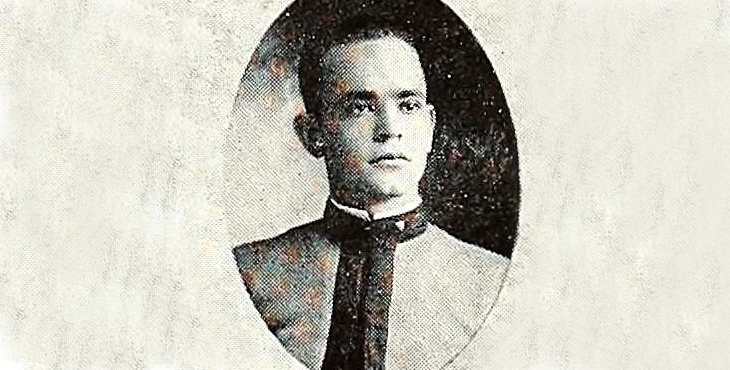 Lt. Col. Alexander Miguel Roberts served as an Army pilot during World War I. He reached celebrity status back home after his plane was shot down over Belgium in July 1918. After surviving his plane crash, the German Army captured Roberts, taking him as a prisoner of war. Hometown newspapers reported on Roberts’s experiences during the war.

Roberts was born in Mexico City on October 13, 1895. His father was an American citizen, and his mother became a naturalized citizen after the family moved to Mississippi. During his childhood, Roberts often traveled back and forth between Mississippi and Havana, Cuba with his family.

Roberts attended Mississippi State University and studied electrical engineering. When the United States entered World War I on April 6, 1917, he withdrew from school to enlist in the Army. He attended flight training for about a year before going to France in June 1918.

On his first mission, Roberts engaged in aerial combat against German aircraft. He successfully shot down the first plane he engaged. As Roberts watched the enemy plane go down, the German ace pilot Josef Jakobs caught him off gaurd and gained an advantage. The German ace shot through and disabled Roberts’s plane. Though he escaped injury, his plane plummeted towards the ground. He became the German ace’s 24th victory.

Roberts survived the crash landing of his aircraft. However, once on the ground the German Army quickly captured him. In the early weeks of his captivity, he made multiple attempts at escape. In one attempt, he jumped off a train while being transferred between prison camps. Roberts attempted to reach friendly lines but the German Army captured him again before he could reach them. Later, he made a successful escape from a prison camp and hid in a forest for nearly a week before willingly returning to the camp due to lack of food.

During Roberts’s imprisonment, the German ace who shot down his plane visited him. Jakobs told Roberts that he felt relieved to learn that he had survived the crash, and that the pilot of the aircraft that Roberts had shot down also survived. The ace promised to write Roberts’s father while he was imprisoned. In 1919, after the end of the war, Roberts was released and returned to the United States.

After returning home, Roberts continued his career as a pilot. He flew in air shows and races across the country. Roberts reached a level of national fame and used this status to promote the aviation industry.

Roberts reentered military service during World War II. The U.S. Army promoted him to Lieutenant Colonel and he served as an aviation adviser.

Roberts dedicated much of his life to the new, quickly growing field of aviation. He served his country in both World War I and World War II. On July 23, 1988, Roberts died at the age of 92 in Tampa. Today he is interred in Florida National Cemetery in Bushnell, Florida.

In 2017, the Veterans Legacy Program partnered with University of Central Florida to discover and share the stories of Veterans interred in local national cemeteries. Lt. Col. Roberts’s story is one of many.  One student conducted research and wrote a biography for Roberts. You can find his full biography here.

To learn more about the Veterans Legacy Program and how we ensure that the memory of our Veterans never fade, please visit our website at: https://www.cem.va.gov/legacy/

NCA is proud to share the legacy of Lt. Col Alexander Miguel Roberts. We honor his service.