Home / Research / For Vets with PTSD, therapeutic group outings may pave the way back into communal life

For Vets with PTSD, therapeutic group outings may pave the way back into communal life 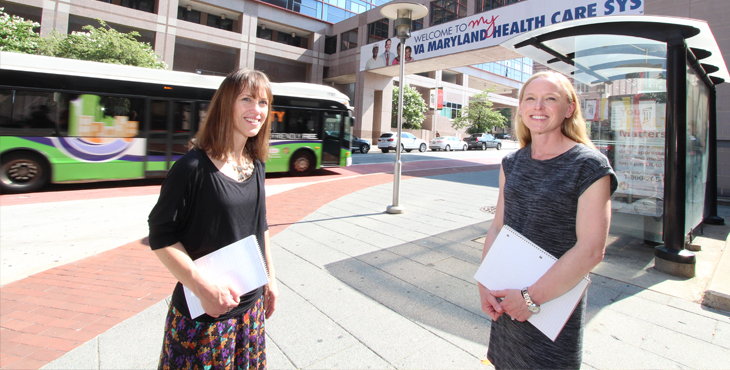 Drs. Erin Romero (left) and Melissa Barone are seen near a bus stop that was one of several starting points for Veterans going on group outings, with a therapist, as part of exposure therapy for PTSD. (Photo by Mitch Mirkin)

For many people, even without a clinical disorder, these can be sweat-inducing, stomach-churning experiences. Throw PTSD into the mix and the anxiety can become overwhelming. Panic can ensue. The ordeal can be intimidating enough to keep some people at home.

Confronting such public situations—in a safe, gradual manner—is part of prolonged exposure therapy. It’s one of the gold-standard psychotherapies VA offers Veterans with PTSD, whether from combat, sexual assaults, or other traumas.

However, the therapy is usually individual. Having Veterans go on group outings with peers who are coping with similar fears is relatively untrodden terrain.

Clinician-researchers at the Baltimore VA Medical Center believe the group approach may pose unique advantages for some patients. The team just published an evaluation of the model.

Their report, in the Journal of Traumatic Stress, is based on results from 43 Veterans, mostly male and African American. It concludes that “in vivo exposure group therapy” shows promise for those resistant to more conventional forms of PTSD treatment.

The Baltimore VA psychologists who designed the program modeled it on traditional prolonged exposure therapy. They call it Get Back in Life (GBL).

Dr. Melissa Barone says a typical sentiment expressed by Veterans in GBL is: “I would never have done this on my own, but going with the group helped me to get over the hardest part.”