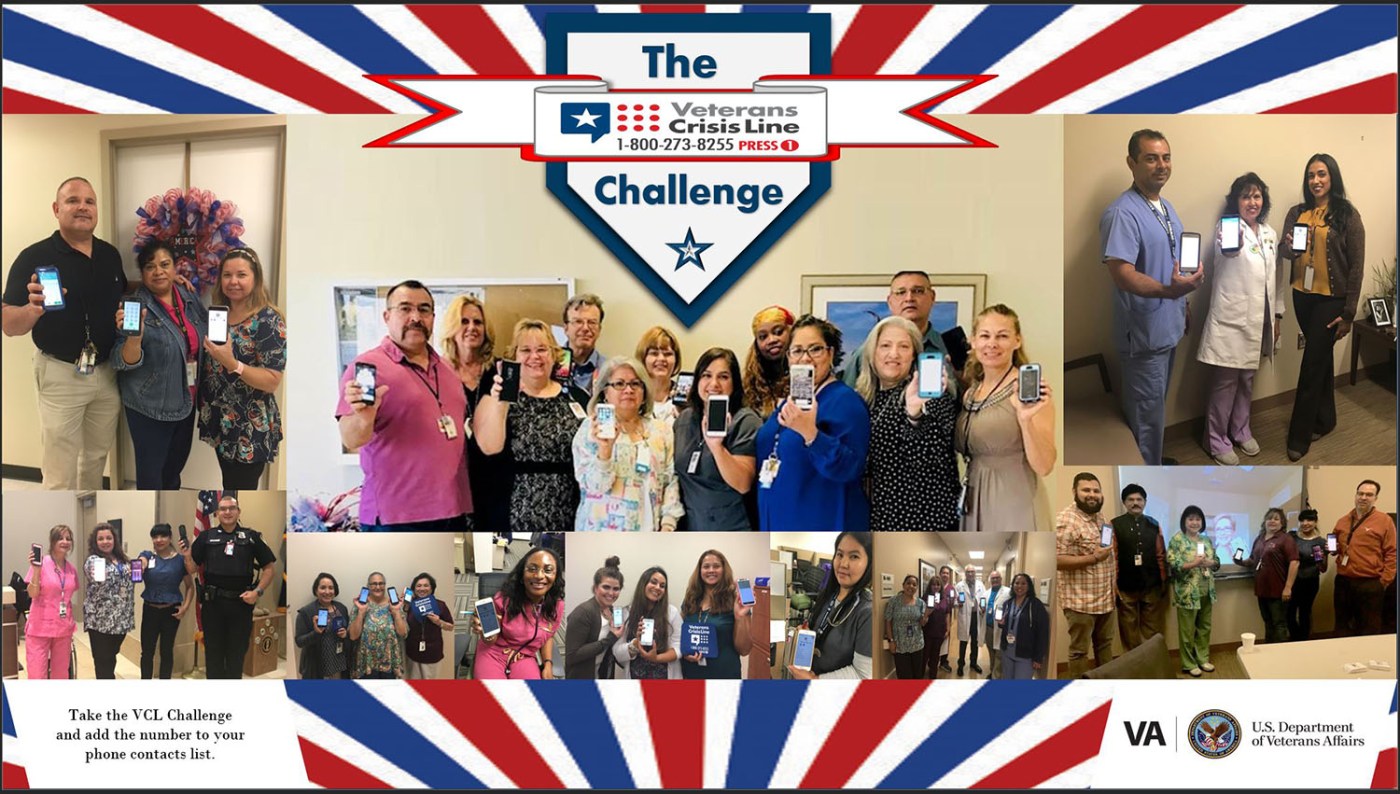 VA’s Texas Valley Coastal Bend Health Care System was presented with the VCL Challenge earlier this month and its employees and volunteers have responded.

“The Veterans Crisis Line [also referred to as the VCL] challenged us as leaders, so now we are challenging our staff,” said Homero Martinez III, the system’s acting director. “To show how much you care about our nation’s service members and Veterans, I encourage you to program the VCL phone number [1-800-273-8255 and Press 1] into your phone and tell everyone you know to do the same. You never know when you might run into someone who needs it.”

Word quickly began to spread across the various clinics under health care system. Throughout the previous week photos of different staff members showing the VCL number on their phone screens began being posted online as proof that they had met the challenge.

When asked if they had participated in the VCL Challenge, several employees proudly said they completed it before a challenge was ever presented stating they added the potentially life-saving phone number months or even years earlier.

The health care system has raised awareness about of the importance of the VCL by other means. Flyers, mini posters, table displays and coasters can be seen throughout different public areas and offices at the local VA facilities.

Some VA employees like Michael Carmona help raise awareness about the VCL by wearing a camouflaged pattern wrist band with the number.

“I been wearing one of these [VCL] wristbands since 2010,” said Carmona. “My first  wristband broke about a year ago, so I got this new one as a replacement. I don’t wear it all the time, but it is effective in promoting the number to others because I’ve had people stop and ask me about it.”

Carmona said he has seen several other people wear the wristbands.

“One of my coworkers has worn the same wristband with the VCL number since the very first day he began working for the VA and he’s pretty much kept on for the last eight months or so,” added the disable Army Veteran.

Carmon said his coworker and other fellow Veterans and employees received a wristband from Dr. Rodolfo A. Quintana, a psychologist and the suicide prevention coordinator, who along with several VA social workers and mental health professionals hand out goodies such as wristbands and stress balls bearing the Veterans Crisis Line number and information at various public outreach events throughout the year.

The local VCL Challenge has shown no signs of stopping soon. In fact, the challenge has taken over the system’s social media platform. The profile photos and banners of the system’s Twitter and Facebook pages have been replaced with info graphics encouraging online guests to add the Veterans Crisis Line number to their phone contacts as well.

The Veterans Crisis Line is a toll-free, confidential resource that connects Veterans in crisis and their families and friends with qualified, caring VA responders.

“Since launching in 2007, the Veterans Crisis Line has answered over 3.3 million calls and initiated the dispatch of emergency services to callers in imminent crisis more than 93,000 times,” said  Martinez to all employees via an internal electronic message.  “That is a lot of lives saved, but we can help many more, therefore do what you can to have this life-saving piece of information nearby.”

All Veterans and their families and friends are also asked to take the VCL Challenge. Simply add the number to your phone contacts list and then share a photo of the number displayed on your phone as proof.

Here’s a tip. Many people snap a picture of an item with the VCL number to serve as a photo for the contact, and to serve as a reminder to press 1 after dialing 1-800-273-8255. Snapping a photo from an online image of the VCL is also another option in case a printed example like a flyer or poster is not available nearby.

To view images of employees taking on the VCL Challenge click here and then click on the arrow on the right to scroll through the images.

(This story was co written by Reynaldo Leal)