Home / Guest Posts / K9s for Warriors: Because together we stand

K9s for Warriors: Because together we stand 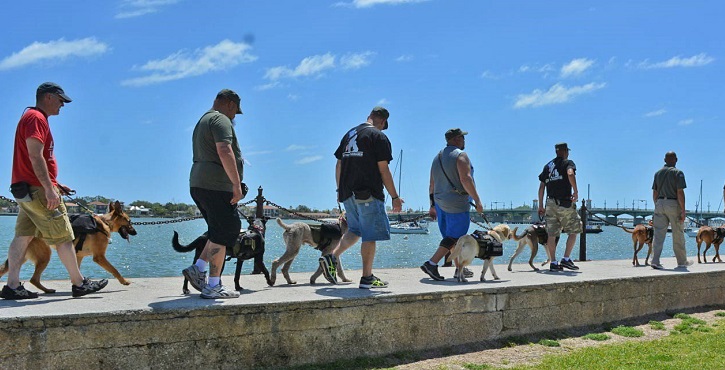 The following is an excerpt from a blog on consumeradvocate.org written by Scott Smith.

James Rutland is a 12-year Army veteran who served a tour of duty in Iraq in 2004, followed by two more tours in South Korea. He left the military in 2014, suffering from multiple medical conditions related to his service, including mild traumatic brain injury (TBI), sleep apnea, and hearing loss, to name a few.

Most importantly, he suffered from depression and often thought about suicide. Thinking he could do it alone, Rutland tried healing from the trauma on his own. That wasn’t working. “If you do what you’ve always done, you’ll get what you always got,” says Rutland.

In 2016, Rutland finally rounded the bend of recovery when he was paired with his service dog, Dunkin. “I started focusing on “we instead of “me”, says Rutland.

He has a semi-colon tattoo on his right wrist, a known symbol of taking a pause when thinking about suicide. Unlike a “period” which ends a sentence, the semicolon creates a pause, for the reader, then continues the story. Rutland wears it proudly. “It’s a great conversation starter,” Rutland says.

He goes on to explain that breathing, family, friends, and the program that gave him Dunkin are what keeps him going.

K9s For Warriors is a BBB accredited charity organization located in Ponte Vedra, Florida, that has been pairing rescue dogs with traumatized soldiers since 2011. The dogs are trained to be service dogs, specifically performing tasks to quiet the symptoms of war trauma disabilities in soldiers.

“The skillsets our dogs learn help these warriors with anxiety, isolation, depression, and nightmares,” says Shari Duval, the founder of K9s For Warriors. “So, the warriors can function again in public.”

Specifically, the dogs are trained to deal with symptoms of Post-traumatic Stress Disorder (PTSD), traumatic brain injury (TBI), or military sexual trauma (MST), as a result of military service on or after 9/11.-

Duval started the program after watching her son Brett Simon suffer from PTSD after he returned from Iraq. Simon did two tours, developing PTSD during the first one. Watching her son suffer from the debilitating condition motivated Duval to research alternative treatments to the standard talk therapy and medication, neither of which worked for her son.

“On average, soldiers take 14 meds a day to treat PTSD, TBI, or MST,” says Duval. If treatment is not working, she says veterans are prescribed more and more drugs. “I even knew one soldier who was taking 44 meds per day.”

After two years of researching alternative PTSD treatments, Duval came upon a program that paired service dogs to alleviate their PTSD symptoms in veterans.

According to Simon, “Mom was the one that suggested I use a service dog to deal with my PTSD when nothing else worked.” Duval saw her son’s symptoms begin to improve. She then wanted to help other veterans do the same.

Thus, the K9s For Warrior program was born. With her son’s background in training dogs, including 13 years as a canine police officer, Duval convinced Simon to start the nonprofit together.

To date, the program has rescued more than 850 dogs and 440 military service members, with an astounding 99 percent program success rate.

Visit  consumeradvocate.org  to read the rest of this story.