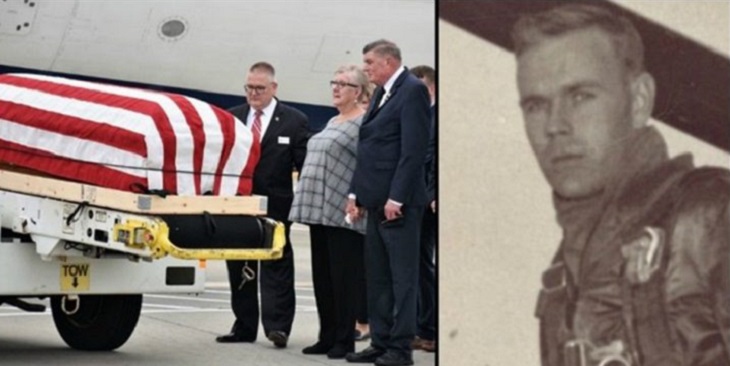 On Aug. 13, 1965, a flight of RC F-101 Voodoo reconnaissance jets roared in the mid-day skies over Son La, North Vietnam near the Laotian border. In the lead, was Lt. Col. Fredric M. Mellor of the United States Air Force Reserve. It was a particularly unlucky Friday the 13th, as enemy fire raked his Voodoo forcing him to eject.

For decades, Mellor’s true fate remained a mystery. He was marked as “missing in action;” one of more than 2,600 U.S. service personnel unaccounted for during the Vietnam War. For 53 years, Mellor’s wife and daughter clung to the increasingly slim hope that one day he would return.  Finally, closure came for Mellor’s daughter, Linda.  She received a phone call from the Air Force notifying her that military forensic experts at the Defense POW/MIA Accounting Agency in Hawaii had positively identified her father’s remains recovered from a faraway battlefield in Son La, Vietnam.

Mellor was finally coming home to his native Rhode Island.

Linda and her family were not alone in the task of receiving and celebrating her dad’s heroism. The Rhode Island Veterans Memorial Cemetery and the community sprang into action to support the Mellor family.  A host of Veteran Service Organizations, state agencies, federal agencies and private citizens, joined together to honor Mellor’s sacrifice.

Deanna ‘Dee’ Poole, Rhode Island state captain for the Patriot Guard Riders, says she got word of Mellor’s return through social media and immediately began the process of contacting the family.

“We offered our support in the form of a flag-line as well as motorcycles to escort the remains from Cranston, Rhode Island to the Exeter Veterans Cemetery – a journey of about 15 miles,” said Poole.

Her organization, the Patriot Guard Riders, has been in existence for about thirteen-years and boasts membership of more than 150,000 nationwide.

“My father was in the military and I have some uncles who served in Vietnam so Veterans hold a special place in my heart,” says Poole, “the flag-line, the people along the route and the motorcycle escort are all ways of saying ‘thank you’ to those who gave their all for our freedom and liberty.”

Support was also provided by the Rhode Island Combat Veterans Motorcycle Association. Stephen Mondaca, an Afghanistan War Veteran and state representative for Rhode Island, says his organization was honored to support the ceremonies. “We absolutely do what we can,” Mondaca said, “we provided three of the seven riders accompanying the procession.”

Lt. Colonel Fredric Mellor was laid to rest on Sept. 28. A lone F-15 Eagle fighter jet screamed through the late September low clouds over the mourners; a tribute from today’s generation of fighter pilots to a fallen hero, finally laid to rest – at home in Rhode Island, at last.

VA’s National Cemetery Administration has one of the most important missions in the department – escorting heroes, like Lt. Colonel Mellor, with dignity and honor to their final resting place. You can learn more about the NCA and the benefits and services it provides to Veterans’ families  by visiting the its website.

About the author: John Loughlin is a Veteran service representative for VBA in Providence, Rhode Island.