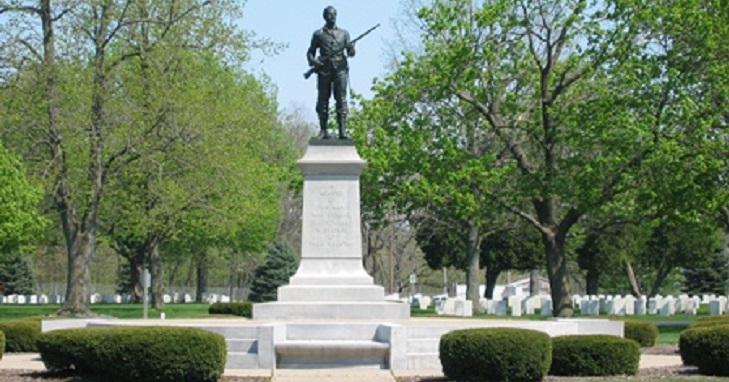 Countering the waning support for the Civil War in the summer of 1862, President Abraham Lincoln called for 300,000 volunteers to serve in the Union Army for three years or for the duration of the rebellion. Whitfield Evans, a 29-year-old farm laborer—and recently wedded to Charlotte Robinson–answered that call. Evans volunteered in Wyoming, Illinois, on Aug. 15, 1862, and was assigned to a regiment of ten companies, made up of 940 men from Stark and Henry counties. Originally known as the “Henry County Regiment,” the governor of Illinois later numbered the unit as the 112th volunteer infantry.

The 112th mustered into federal service in September 1862, from Peoria, Illinois. Sylvester Otman, businessman, farmer and surveyor from Stark County, was commissioned captain commanding the Wyoming volunteers, Company E, numbering three officers and 89 enlisted men, including Whitfield Evans. Assigned to the Department of the Ohio, the 112th spent its first winter in Kentucky.

Engaging the Enemy and Capture

In mid-March 1863, Confederate Brig. Gen. John Pegram launched a large raid into Kentucky from Tennessee. The 112th regiment moved by both rail and foot 35 miles south to Danville, Kentucky, to block the Confederate’s advance. Company E was assigned to guard the bridge used by to cross the Dix River, five miles north of town. As Pegram’s force closed on Danville, the Union troops withdrew to the north. However, Company E was overlooked and not issued the necessary movement orders. Only when Confederates were beginning to surround them did the company realize their plight and undertake a hard night march to escape entrapment and rejoin the regiment.

For the next several months, the 112th patrolled surrounding areas and raided into Tennessee as far as Knoxville. On July 28, 1863, Company E was part of a 200-man force ordered to Richmond, Kentucky, 35 miles east, to intercept Confederate troops advancing in that direction. Once there, the company discovered 1,500 enemy cavalrymen. The cavalry surrounded Richmond and opened heavy artillery fire on the Union troops. Ordered to charge the Confederate line, several soldiers of Company E, including Evans, were captured.

The Confederates had orders to keep moving north and no means to hold prisoners, so Evans and his comrades were released on parole after being held less than 24 hours. Refusing to honor the paroles, the commanding general of the Department of Ohio declared them invalid and ordered the soldiers to immediately report back their regiment.

In August 1864, the Union’s Army of the Ohio, under the command of Gen. Ambrose Burnside, moved troops into southeast Kentucky to prepare for the permanent occupation of east Tennessee (a portion of the state with strong Union sympathies). By Sept. 1, Burnside’s force established headquarters in Knoxville, Tennessee. The Army’s 1st Brigade, including the 112th, was stationed in Athens, Tennessee, 50 miles to the southwest of Knoxville, arriving on Sept. 10.
Recapture and a New Identity

Following the Battle of Chickamauga, the Confederates captured the military hospital in Athens on Sept. 27, which had 11 men from the 112th Illinois infantry including Whitfield Evans. Realizing that in the eyes of the Confederates, he was a parolee who had taken up arms without having been exchanged, Evans most likely feared for his life. From capture until his death, Evans assumed his brother-in-law’s name, John Robinson. His companions never revealed the deception.

Due to the overflow of their main prison in Richmond, Virginia, the Confederates opened a new prison in Danville, Virginia, in November 1863. The Danville prison was comprised of six unused tobacco warehouses plus several small outlying facilities, including two camp hospitals. One hospital was established solely to contain an outbreak of smallpox and was disestablished in February 1864, as the outbreak subsided.

Among the most common ailments noted among the prisoners were rheumatism and chronic diarrhea. The latter of these is listed as Evan’s cause of death on March 21, 1864. His personal possessions were noted as one shirt and cap. Evan’s was buried under the name of “J Robinson” in Grave No. 646 in what would later become the Danville National Cemetery.

John Quincy Robinson, the brother-in-law whose identity Evans assumed, also volunteered for service at the same time as Evans. As part of Company C, 81st Illinois Volunteer Infantry, recruited from Peoria County, Robinson served throughout the war, including the siege of Vicksburg, and discharged in August 1865. Robinson is buried in a private cemetery in Nebraska.

Following many years of diligent research, Evans’ distant family was able to work with NCA historians to verify the subterfuge. Finally, on October 12, 2018, a new headstone was placed on Grave No. 646 in the Danville National Cemetery. While the front inscription still reads “J. Robinson”, the obverse now has the important addition of “a.k.a. Whitfield Evans.”

“This story of service illustrates so much about NCA and its commitment to ensure “No Veteran Ever Dies” said Under Secretary for Memorial Affairs Randy Reeves. Thanks to NCA’s historians who worked to validate and document Whitfield Evans’ service and sacrifice. Also, this story so profoundly demonstrates just how important it is for America to accurately memorialize its Veterans. And finally, it underscores the fact, that as a nation, we will never forget and we will never give up looking for those who are missing, no matter how long it takes.”