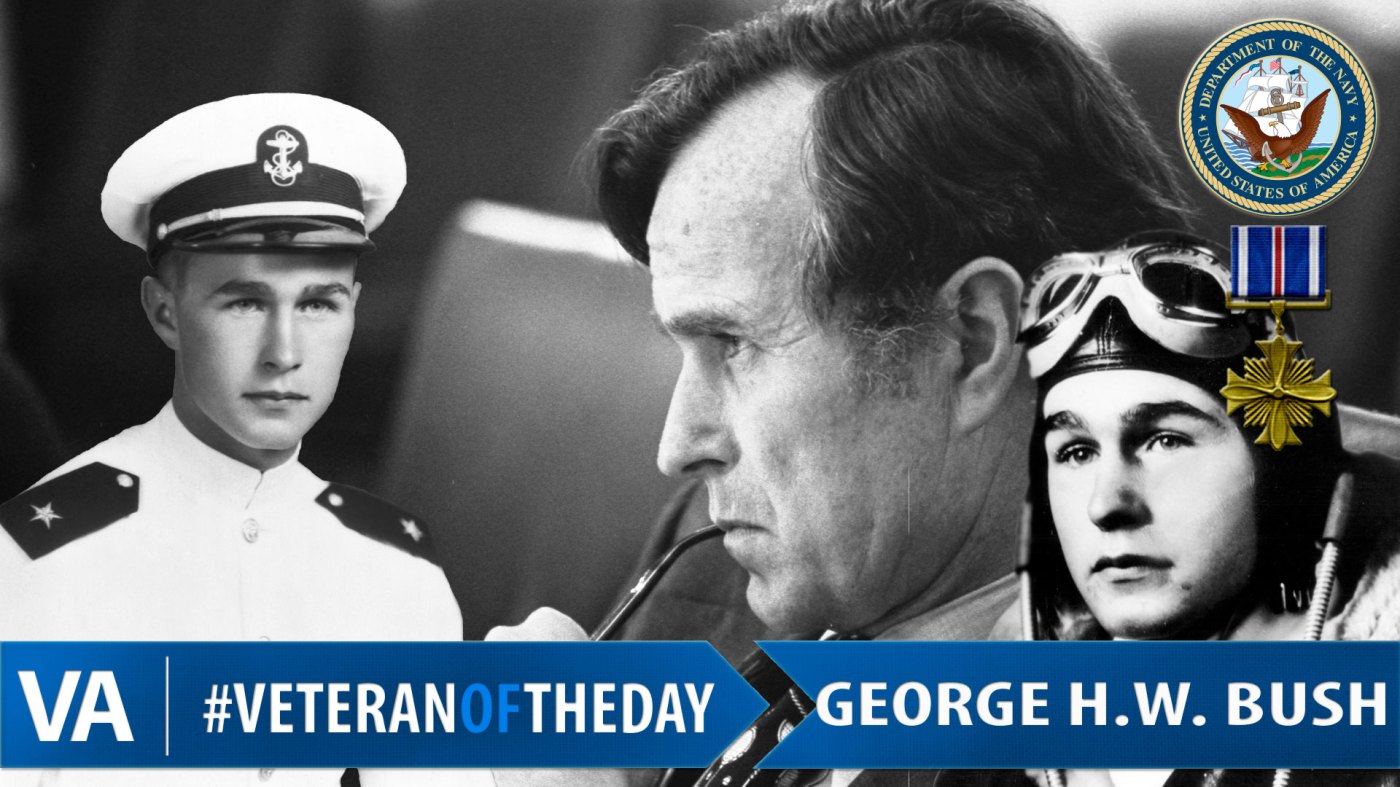 Bush was born in 1924 in Milton, Massachusetts. After the Dec. 7, 1941 bombing of Pearl Harbor, he enlisted in the Naval Reserves to become a naval aviator and join the war effort. Bush received his wings just before turning 19 – making him the youngest commissioned pilot. He soon became a combat pilot serving with the Torpedo Squadron Fifty-One aboard the USS San Jacinto in the North Pacific. The squadron is credited with sinking 17 enemy ships during World War II.

In 1944, his TBM Avenger aircraft was hit by Japanese fire. Despite the severity of the damage, Bush was able to drop the aircraft’s bombs on the target before flying out over water and ejecting with his fellow crew members. After safely parachuting into the water, Bush was later found by an American submarine, the USS Finback. Serving as a lookout with other rescued pilots, he spent 30 days at sea with the Finback’s crew. Bush flew 58 combat missions and is credited with 126 carrier landings and more 1,200 flight hours.

In December 1944, he was assigned to Norfolk Naval Base in Norfolk, Virginia, where he trained new combat pilots. Bush was honorably discharged from the Navy in September 1945.

After the war, Bush received an undergraduate degree in economics from Yale University. He became an executive in the oil industry before beginning his political career. He was elected to the U.S. House of Representatives for Texas’s seventh district in 1966 and was reelected for a second term in 1968. Bush also served as the U.S. ambassador to the United Nations, chairman of the Republican Party, director of the CIA and vice president to President Reagan.

He was elected as the 41st President of the United States in 1989. While president, Bush worked to improve U.S. relations with the Soviet Union; led the nation through the liberation of Kuwait from Iraqi forces and signed the North American Free Trade Agreement.

For his military service, Former President Bush received the Distinguished Flying Cross and three Air Medals. A Presidential Unit Citation was also awarded to the USS San Jacinto. The USS George H.W. Bush was named for the former president in 2009. In 2011, he received the Presidential Medal of Freedom from President Barack Obama.

Former President Bush passed away on Nov. 30, 2018 at the age of 94. He will be buried alongside his wife of 73 years, Barbara Bush, and his daughter Robin at the George H.W. Bush Presidential Library in College Station, Texas.