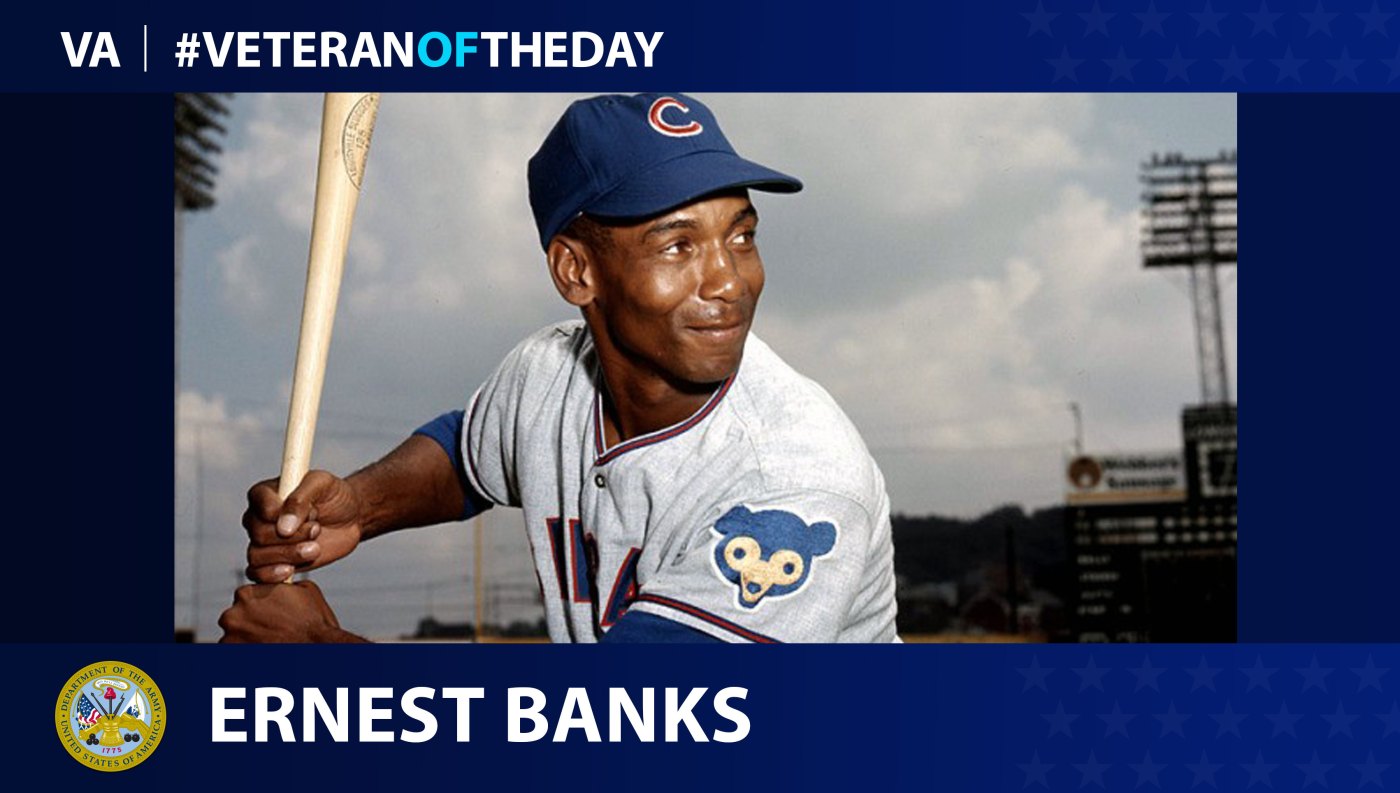 Today’s #VeteranOfTheDay is Army Veteran Ernest “Ernie” Banks. Ernie served from 1951 to 1953 and would become known for his career as a baseball player.

Ernie was born in Dallas, Texas in 1931 as one of twelve children his parents had. Although he did not have an easy childhood, Ernie spent a lot of time playing sports as a child. Ernie was not afforded many opportunities as an African American growing up in the south. In 1950, he graduated from Booker T. Washington High School where he was a varsity athlete in three sports and played softball recreationally.

In 1951, Ernie was drafted to serve in the Army. His overseas deployment took him to Germany. Ernie was a member of 45th Anti-Aircraft Artillery Battalion based at Fort Bliss near El Paso, Texas. While in the military, Ernie served as his battalion’s flag bearer. In 1953, he was discharged from the military.

Immediately after his discharge, Ernie began his journey in professional baseball, signing to play for the Kansas City Monarchs of the Negro Leagues. After the season ended in Kansas City, he signed a contract with the Chicago Cubs in September 1953. Ernie was the first African American to play for the Cubs and among the first to play in Major League Baseball.

Ernie played for the Cubs for nearly two decades up until 1971. Over these years, he became a beloved figure in Chicago for his passion and love for the game of baseball. At the commencement of his career, Ernie had hit 512 home runs (currently ranked 23rd all time), made 14 all-star game appearances and won two Most Valuable Player awards. In 1977, he was inducted into the Baseball Hall of Fame.

Ernie remained active with the Cubs for the rest of his life, taking on various roles both in the front office and as an ambassador to the team. His love for the team inspired fans to call him by the nickname “Mr. Cub.” Ernie is also known for other quotes such as the labeling of the home of the Cubs, Wrigley Field, as the “Friendly Confines.” He is also known for telling his teammates how everyday was such a beautiful day for baseball and “let’s play two.”

In 2013, Ernie was presented with the Presidential Medal of Freedom, the highest civilian honor, by fellow Chicagoan Barack Obama for his achievements and contributions to American history. In January 2015, Ernie passed away from a heart attack. He is buried at Graceland Cemetery in Chicago, just a few block away from the place he called “the Friendly Confines.”