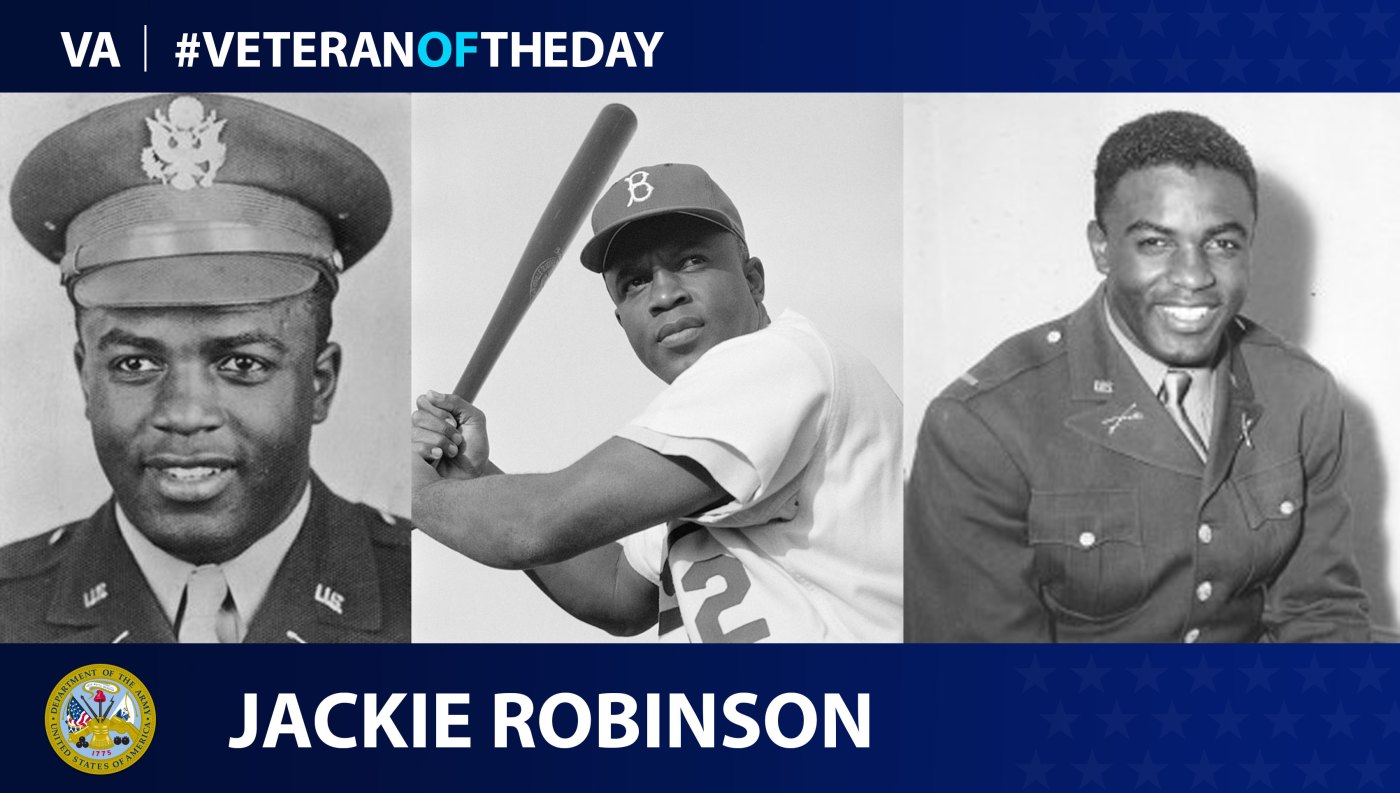 Jackie Robinson – Veteran of the Day

Today’s #VeteranOfTheDay is Army Veteran Jackie Robinson. Jackie served during World War II and made a historic impact on desegregation in the United States.

Jackie was born in Cairo, Georgia in January 1919. He was born into a family of sharecroppers, but his family moved to Pasadena, California in 1920. Jackie attended Muir Tech High School, where he was a four sport athlete, playing football, basketball, track, and baseball. He was inspired to get into athletics by his brother, a silver medalist in track and field during the 1936 Olympics. Following high school, Jackie attended Pasadena Junior College where he graduated in 1939. He went on to attended the University of California, Los Angeles where he continued playing four varsity sports, even winning a national championship in track.

In 1942, Jackie was drafted into the Army. He was sent to Fort Riley, Kansas. With the help of boxer Joe Louis, Jackie was accepted to Officer Candidate School and became a second lieutenant in January 1943. He was transferred to Fort Hood, Texas where he was assigned to the 761st Tank Battalion, an all-black battalion known as the Black Panthers. In 1944, he was court-martialed for refusing to sit in the back of a bus. Because of this, he never got to serve overseas and was instead transferred to Camp Breckinridge, Kentucky where he was an athletic coach, and discharged in November 1944.

In 1945, Jackie received an offer from the Negro League Kansas City Monarchs to play professional baseball. Later, Branch Rickey, the general manager of the Brooklyn Dodgers of Major League Baseball noticed his talent. He signed Jackie to play for their AAA affiliate, the Montreal Royals, in 1946.

On April 15, 1947, Jackie made his major league debut for the Dodgers, becoming the first person of color to play in the MLB. During that season, Jackie faced racial tension from opposing fans and teams but was largely supported by his teammates. He finished that season being named the Rookie of the Year.

Throughout the rest of his career, Jackie was a six time all-star, was named Most Valuable Player in 1949, and won a World Series in 1955. He was known for his tremendous skill as an athlete shown by his speed, hitting, and skills on the field. In 1962 he was elected to the Baseball Hall of Fame. His number, 42, was retired by all MLB teams.

In October 1972, just days after appearing at the World Series in Cincinnati, Jackie died of a heart attack at the age of 53.