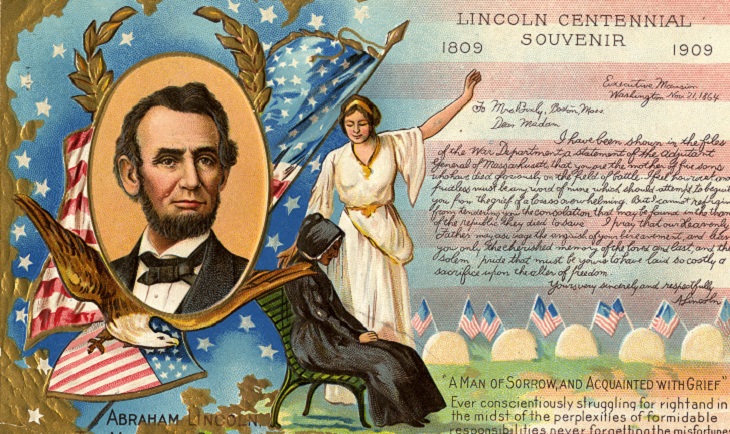 President Abraham Lincoln, the Gettysburg Address, and the national cemeteries are inextricably connected in American history. Lincoln’s birthday on Feb. 12 is especially noteworthy this year because an historic tablet cast with his Gettysburg Address was recently installed in the lobby of the Department of Veterans’ Affairs headquarters. This meaningful object exists only because the nation observes Lincoln’s birthday.

President Abraham Lincoln delivered the Gettysburg Address on Nov. 19, 1863, on a battlefield near Gettysburg, Pennsylvania. Over three days of Civil War fighting on July 1-3 that year, more soldiers died here than any single battle fought in North America before or since.  In just 272 words, Lincoln conveyed the importance of the proposition “all men are created equal” to America’s past, present and future. Thousands had gathered to dedicate the Soldiers’ National Cemetery.  Lincoln did not know that his brief but poignant words would become one of the most famous speeches in American history.

The Gettysburg Address tablets were placed in national cemeteries in 1909 when the nation celebrated the centennial of Lincoln’s birth as an official observance. Efforts included designating Feb. 12 a national holiday and a memorial highway connecting Lincoln-related sites. Publishers printed colorful postcards. The Federal government issued the first penny featuring an historic figure and a 2-cent stamp.

Congress also authorized the original Gettysburg Address tablets, 77, to place in the national cemeteries. They were produced and delivered in 1909—but not by Feb. 12. “The delay was almost entirely due to difficulty in determining the text of the Gettysburg Address,” according to the [Washington D.C.] Sunday Star (May 30).  Lincoln had produced five versions of the speech.  The government chose Memorial Day to announce it would use the Col. Alexander Bliss version, the only copy dated and signed by Lincoln, to become the “standard use of the Lincoln Gettysburg Address.”  The large tablets (56 inches x 33 inches) became an essential feature in the national cemeteries.

For the bicentennial of Lincoln’s birth in 2009, the federal government purchased 62 additional tablets.  At the same time, a damaged tablet at Los Angeles National Cemetery was removed and secured in the NCA History Collection.  Both original and replica tablets were produced through the U.S. Army Rock Island Arsenal in Illinois.  This NCA project assured that Lincoln’s words and the tablet remains a relevant part of the cemeteries as the system continues to grow. Re-installation of the un-restored Gettysburg Address tablet from California at VA headquarters marks the first time one has been displayed outside of a national cemetery—and this was realized for Veterans Month 2018.

Lincoln’s words at Gettysburg and cast in metal are part of national cemetery heritage. VA employees and visitors are invited to stop by this historic object and learn more at NCA History Program website.

About the author:  Sara Amy Leach is the senior historian with VA’s  National Cemetery Administration.