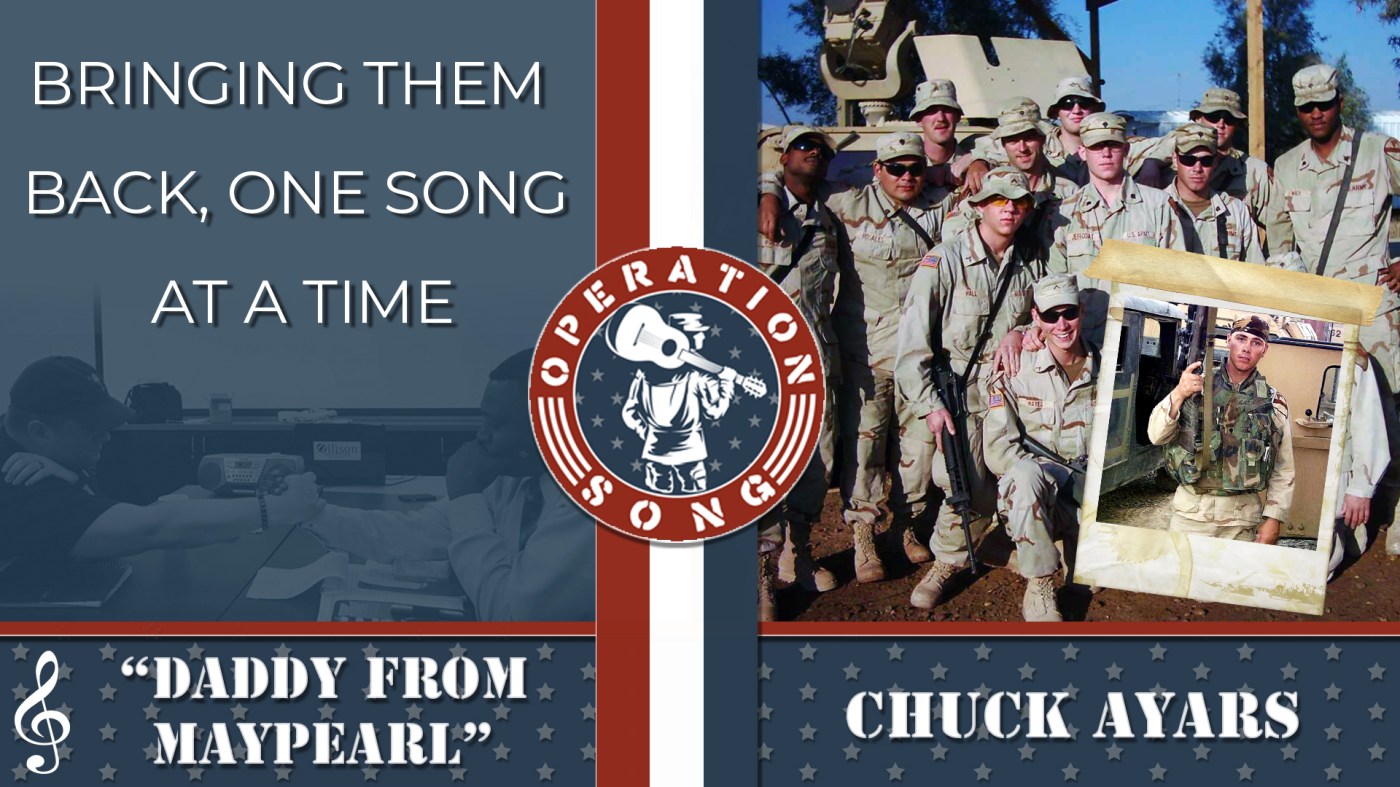 This #OperationSong spotlight is on “Daddy From Maypearl” by Veteran Chuck Ayars who served in the Army. Chuck served from 2002 to 2005.

The Sept. 11, 2001 terrorist attacks had just happened when Chuck enlisted in the Army as an infantryman. After basic and advanced training, he traveled to Fort Hood, Texas and joined the 1st Battalion 12th Cavalry Regiment of the 1st Cavalry Division. In March 2004, Chuck was deployed to Sadr City, Iraq, where he spent a year conducting combat operations in hostile areas before returning home. In this time, out of the 25-man platoon, 16 men were awarded Purple Hearts for wounds received in this combat, and two men were killed. These two men were Sgt. Carl Thomas and Staff Sgt. Guy S Hagy. Chuck would later go on to name is first born son Thomas Hagy Ayars in their honor.

His song, “Daddy from Maypearl,” was inspired by a true story he witnessed during one of the terrible fire-fights that happened in his Iraq deployment. Chuck retold this story when being interviewed:

“I was on a 4-man dismounted –on foot– rifle team that was heavily outnumbered. We were engaged under heavy rifle fire to our north (our front). We continued the fight, pushing our enemy to the north.

At a certain time, approximately 2 hours into this violent engagement, we were instructed, over the radio, to enter and clear a particular 2-story house where the enemy rifle fire was suspected to be coming from.

As we entered, we came into an open courtyard. To our left was the main portion of the house and to our right was a covered area used for storage. Adult Iraqi men and women came out of the main body of the house to my left. I spoke to them in my limited Arabic trying to calm them (Let khaff, let khaffoon which I believe means “Be calm, don’t be afraid.”).

Then, I noticed a small figure in the storage area to my right. It was a little girl who was 3 or 4 years old. I knew that I was far too amped up to calmly get her to come out of that dark space, but I knew that her mom was on my other side. I wanted that little girl to be with her family and I knew that I couldn’t get her out because I couldn’t speak calmly enough. I delegated the responsibility to get her out to Specialist Aaron McAlister. And that’s when I witnessed a wonderful moment. It only took a matter of seconds before it was over, but it left an indelible memory with me.

McAlister, who had his wife and a baby daughter back in Texas waiting for him, slung his rifle around his back, kneeled down, and said “Come here baby.” He did it in such a quiet, calm, fatherly tone that little girl went straight into his arms. He then stood up and turned and handed the girl to her mother. All the while, there was gunfire all around us.”

Chuck, along with many others, witnessed the worst humanity had to offer during war. However, “amid all the horror that is war, [he] was given a brief glimpse of the best humanity can do in a situation.”  Chuck decided to share his story of humanity amidst the horror with Chuck Jones, an Operation Song songwriter. The country melody, “Daddy from Maypearl,” is the result of their collaboration as it describes how the “all alone, scared little girl took McAlister all the way back to Maypearl.”

Thank you for your service, Chuck!

If you have problems listening to the song here, you can also listen to it on the Operation Song SoundCloud page by clicking here: https://soundcloud.com/operationsong-tm/daddy-from-maypearl