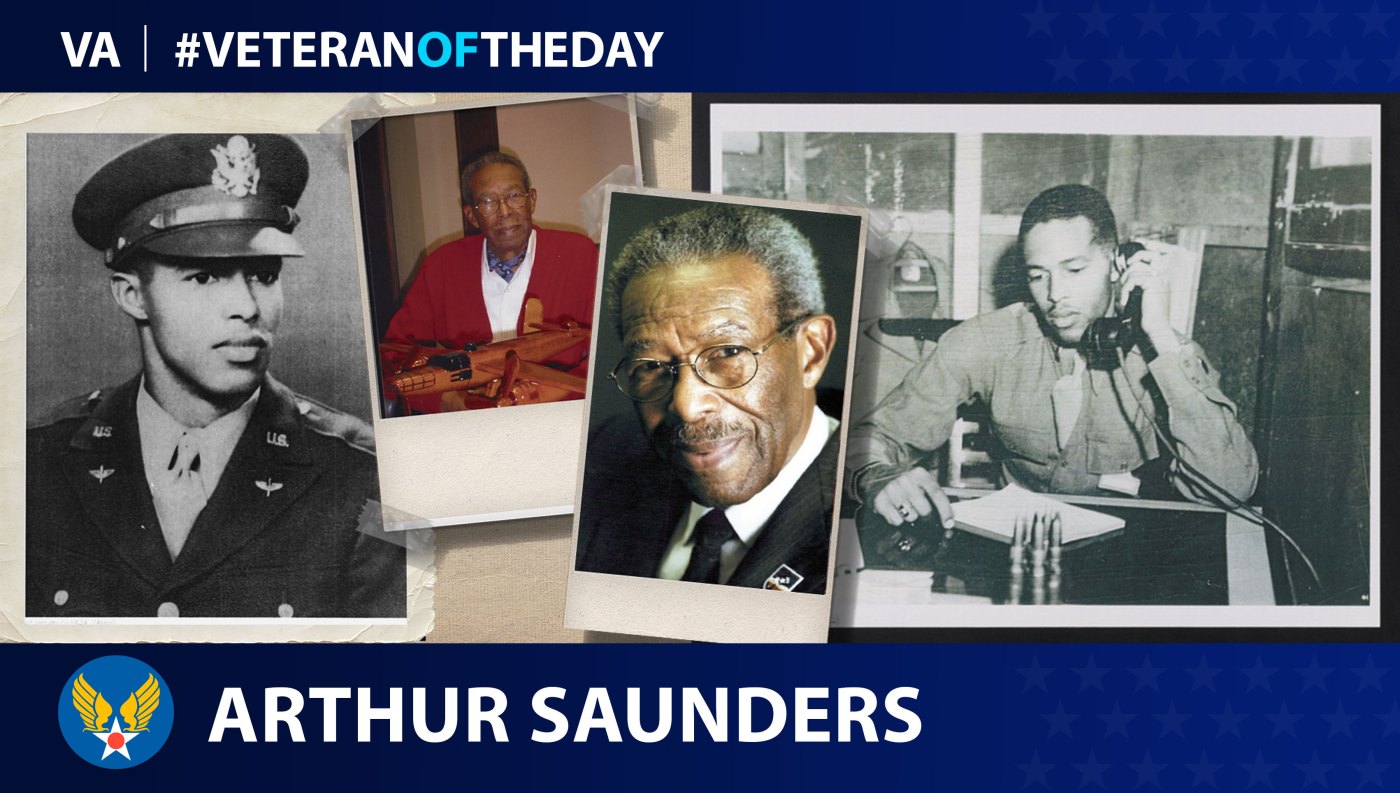 Arthur Girard Saunders wanted to be a pilot since he was young. In 1941, while a student at Kansas State at Fitchburg, he heard about the Fly Program and wanted to apply.  When space opened up, he and a fraternity brother took the course together. However, his stepfather, a former Buffalo Soldier, warned Arthur about racism in the War Department and did not permit him to go to Tuskegee so instead he went to teach in Tulsa after graduating with a bachelor’s in science.  After his stepfather passed away in 1943, Arthur enlisted in the Army Air Corps and then went to Tuskegee. During training, he and the other African American cadets experienced heavy prejudice from the white officers who ran the program. He completed training and was commissioned as a first lieutenant in the 477th Bombardment Group – one of the famed Tuskegee Airmen. As a support officer, it was Arthur’s job to maintain all the technical equipment on the aircraft such as the machine guns, bomb bay, bomb sight, and automatic pilot.  During training, Arthur and his men earned the highest efficiency record out of any medium bombardment group, but they were not accepted by any forces in Europe. Instead, Arthur served in a variety of locations across the continental United States and often had to stick up for his men when they were subjected to racism. Arthur observed that German POWs received better treatment than the Tuskegee Airmen. After the end of the war, Arthur considered staying in the military but decided that he’d rather be an architect and retired from the Army in 1948 at the rank of first lieutenant. Looking back on his service, Arthur said that the “hardest part was overcoming the prejudice.”

After leaving the Army, he earned a bachelor’s degree in architecture from Kansas State and eventually settled in Ohio to start a family.  He became an accomplished architect in Ohio and was the first African-American architect to have the state as a client.  In addition to more than 20 churches in the Cleveland area and many other buildings, Arthur designed the first home for an African-American family in Shaker Heights, helping the suburb to become a national leader in voluntary integration. He even opened an office in Nigeria and designed homes for government workers in Accra, Ghana. Arthur would also serve on the Cleveland Board of Building Standards.

In 2007, Arthur earned the Congressional Gold Medal when Congress gave recognition to the Tuskegee Airmen for their service during the war helping to break the color barrier in the military. Arthur passed away in December, 2011 at the age of 91.

More about Arthur’s story can be found at the Veteran’s history Project at: https://memory.loc.gov/diglib/vhp/bib/loc.natlib.afc2001001.63524