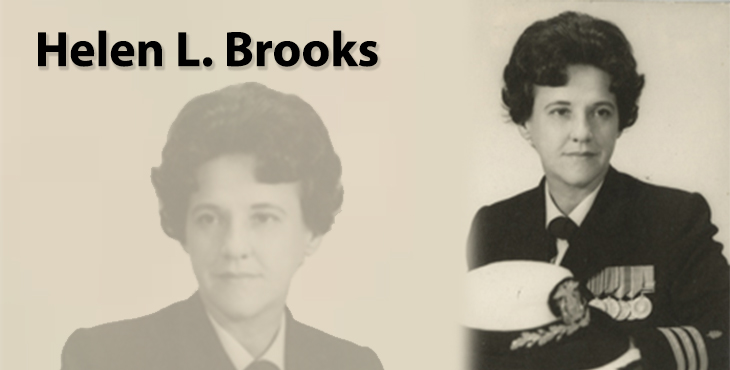 The National Cemetery Administration (NCA) honors and recognizes our Vietnam Era Veterans and their families during our Nation’s commemoration of the anniversary of the Vietnam War.  VA, along with more than 9,000 organizations across the country, joined with the Department of Defense as a commemorative partner to help Americans honor our nation’s Vietnam Veterans.

Today we recognize 30-year U.S. Navy veteran, Capt. Helen-Louise Brooks. Brooks served during three wars, joining the Navy Nurse Corps in 1944, serving aboard the USS Consolation during the Korean war and serving as the Chief Nurse on board Naval Support Activity Da Nang, during the Vietnam War.

Brooks spent most of World War II working for $42 a month for the National Health Service, until she reached the age of 22, and qualified to join the Navy Nurse Corps. After initial training she was sent to Camp Lejeune, North Carolina, providing medical support for a Netherlands’ Marine Corps battalion.

When the war ended she stayed in the Navy Reserve and used her G.I. Bill to earn her Bachelor’s in Nursing Education from Boston University. She then spent a year teaching nursing at Yale.

When the Korean War started, she volunteered to go back on active duty and was assigned to the USS Consolation, a hospital ship.

After the Korean War Brooks earned her master’s degree in Hospital Administration from Columbia University.

In Vietnam she was served as the Chief Nurse at NSA Hospital Da Nang. She was there during its most active time, 1968-69, and endured repeated mortar attacks. She said, “There is nothing as satisfying as taking care of casualties … [it’s] the best kind of job a nurse can have.” She earned a Legion of Merit with combat “V.”

She was born September 20, 1918 in Lowell, Massachusetts. She retired from the Navy in 1971, having served a total of 30 years in the Navy/Reserve. She then worked in the Panama Canal Zone before retiring in San Diego.

Brooks died April 26, 2013. She is interred at the Miramar National Cemetery in Section 12, site 628. (Photo courtesy of Texas Tech Vietnam Archive inside the Virtual Vietnam Archive.)  The photo, along with 419 other items from her life, including 5 ½ hours of a 2005 interview, can be seen here: https://vva.vietnam.ttu.edu/agents/people/368

Authorized by Congress, established under the Secretary of Defense, and launched by the President in May 2012, the Vietnam War Commemoration recognizes all men and women who served on active duty in the U.S. Armed Forces from Nov. 1, 1955 to May 15, 1975. Nine million Americans served during this period, and the Commemoration makes no distinction between Veterans who served in-country, in-theater, or were stationed elsewhere during those 20 years. All answered the call of duty. Throughout the year, NCA will participate in honoring Vietnam Veterans, with a special emphasis during the week of March 23 – March 31, 2019.

These national cemeteries will conduct a publicized Vietnam Commemorative ceremony to include a wreath laying and presentation of lapel pins to recognize and honor Vietnam Veterans and their families within the community.