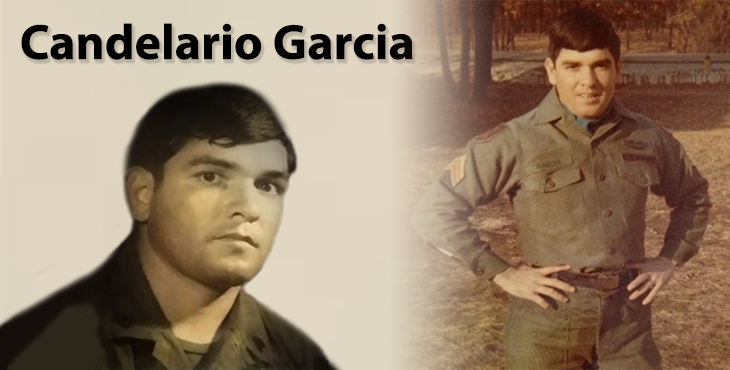 The National Cemetery Administration (NCA) honors and recognizes our Vietnam Era Veterans and their families during our Nation’s commemoration of the anniversary of the Vietnam War.  VA, along with more than 9,000 organizations across the country, joined with the Department of Defense as a commemorative partner to help Americans honor our nation’s Vietnam Veterans.

Today we recognize Medal of Honor recipient, Army Sgt. Candelario Garcia. Garcia was deployed to Vietnam December 8, 1968, as part of the 1st Infantry Division. While on patrol near Lai Khe, his platoon found an enemy base camp. As the platoon advanced they came under intense fire. Disregarding the hail of bullets, Garcia crawled within 10 meters of an enemy machine gun bunker before charging it. He then threw two grenades through the gun ports, killing the four enemy troops inside.

Exposing himself again to intense fire, he raced to another bunker and killed three more defenders.

He then risked his life a third time, to rescue two injured comrades.

Finally, he rejoined the company in an assault which overran the enemy position.

Authorized by Congress, established under the Secretary of Defense, and launched by the President in May 2012, the Vietnam War Commemoration recognizes all men and women who served on active duty in the U.S. Armed Forces from Nov. 1, 1955 to May 15, 1975. Nine million Americans served during this period, and the Commemoration makes no distinction between Veterans who served in-country, in-theater, or were stationed elsewhere during those 20 years. All answered the call of duty. Throughout the year, NCA will participate in honoring Vietnam Veterans, with a special emphasis during the week of March 23 – March 31, 2019.

These national cemeteries will conduct a publicized Vietnam Commemorative ceremony to include a wreath laying and presentation of lapel pins to recognize and honor Vietnam Veterans and their families within the community.