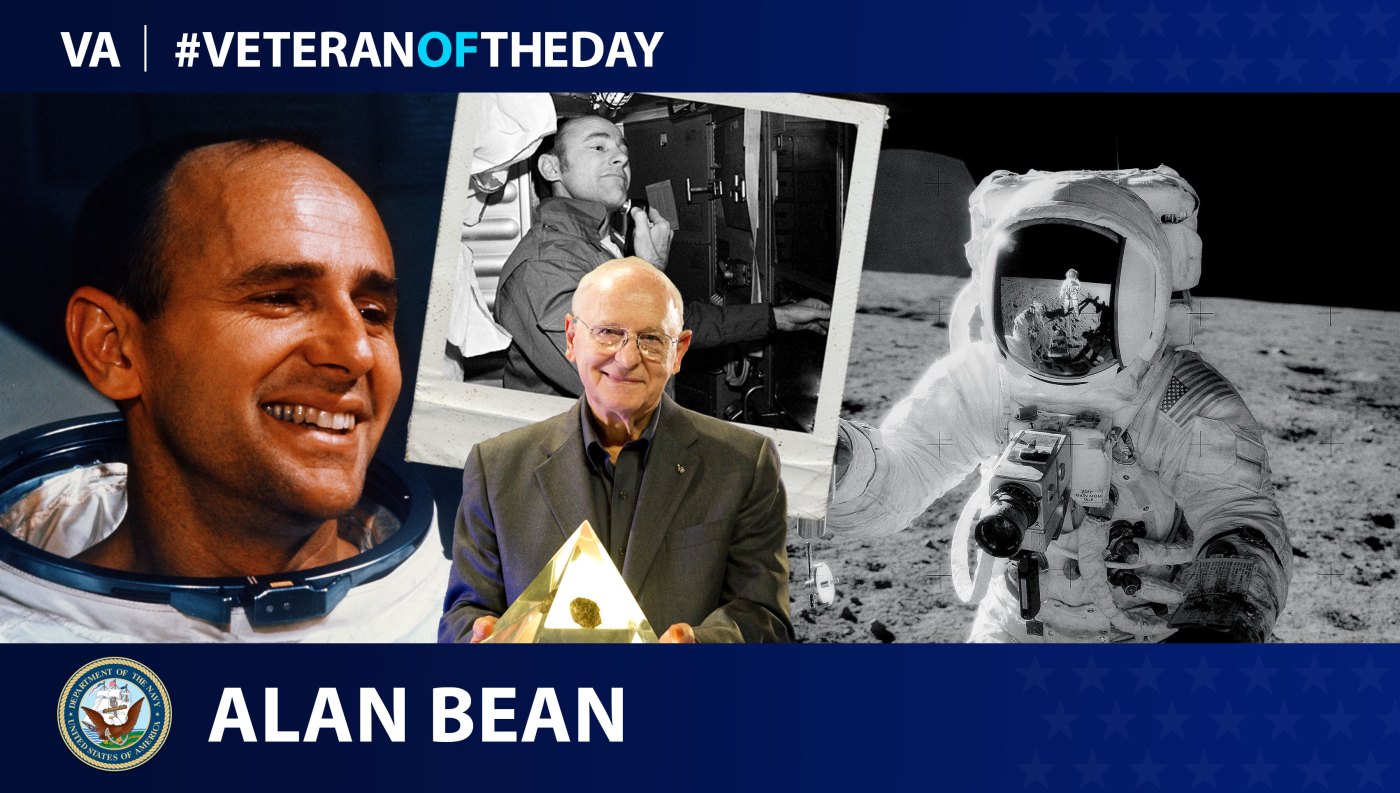 Veteran of the Day graphic created by Kimber Garland for the U.S. Department of Veterans Affairs

Today’s #VeteranOfTheDay is Navy Veteran Alan Bean. Alan was a Navy pilot and National Aeronautics and Space Administration (NASA) astronaut who walked on the moon.

Alan was born in Wheeler, Texas in March 1932. As a boy, he lived for a period of time in northern Louisiana, but moved back to Texas where he attended high school in Fort Worth. Alan then attended the University of Texas at Austin where he earned his bachelor’s degree in aeronautical engineering in 1955. While in college, he joined the Naval Reserve Officer Training Corps.

Alan attended flight school upon joining the Navy after college. He was assigned to Attack Squadron 44 in Jacksonville, Florida until 1960. Afterward, he became a test pilot for the Navy. Alan was assigned to Cecil Field, Florida where he was selected by NASA to be an astronaut. At this point in his career, he logged over 7,000 miles of flight time for the Navy.

In his training years with NASA, Alan was assigned as a backup crew member on missions Gemini 10 and Apollo 9. He was finally invited to be a member of the Apollo 12 crew along with Pete Conrad and Dick Gordon. In November 1969, Apollo 12 was the second mission to land on the moon, giving Alan the distinction of being one of the first people to walk on the moon. Later, Alan would be the commander for Skylab 3, the second mission to the space station. He spent 59 days on board and conducted a spacewalk. Alan was then assigned as the backup commander for the Apollo-Soyuz Test Project. He retired from the Navy in 1975 but continued working with NASA in civilian roles before retiring for good in 1981. In his time with the Navy and NASA, Alan earned the Navy Astronaut Wings, Navy Distinguished Service Medal, and NASA Distinguished Service Medal.

In retirement, Alan took up painting and created many famous pictures of his vision of the moon. Alan passed away in Houston In May 2018, and was buried at Arlington National Cemetery in November.