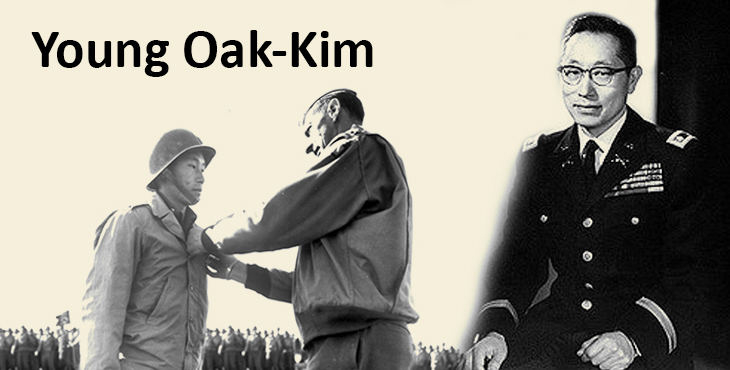 National Go for Broke Day honors members of the 442nd Regimental Combat Team, which was a segregated World War II unit made up of Asian-Americans, and was the most highly decorated unit of the war. Today we honor a member of that unit, Col. Young-Oak Kim.

Born in Los Angeles to Korean immigrant, Kim Joined the unit as a 2nd Lt. at Camp Shelby, Mississippi, according to the Los Angeles Times.

When he reported, his battalion commander offered him a transfer out of the unit, because it was mostly made up of Japanese-Americans. “Koreans and Japanese don’t get along.” He said.

To which Oak responded, “We’re all Americans. And we’re all fighting for the same thing.” He stayed.

When the unit got to Italy, Kim distinguished himself by leading a raid behind German lines near Cisterna, capturing two Germans and returning them past two enemy outposts. The intelligence gained from the prisoners helped the Army break out from Anzio beach and capture Rome. For this action, he was awarded the Distinguished Service Cross. It was one of many awards he would receive.

He also served during the Korean War, becoming the first Korean-American to command a combat battalion. There he earned the Republic of Korea’s Taeguk Cordon of the Order of Military Merit.

After retirement in 1972, he stayed active in multiple veterans and Asian community groups. He helped found the Koreatown Youth and Community Center, and was instrumental in the creation of the Go For Broke Monument in the Little Tokyo District of L.A.