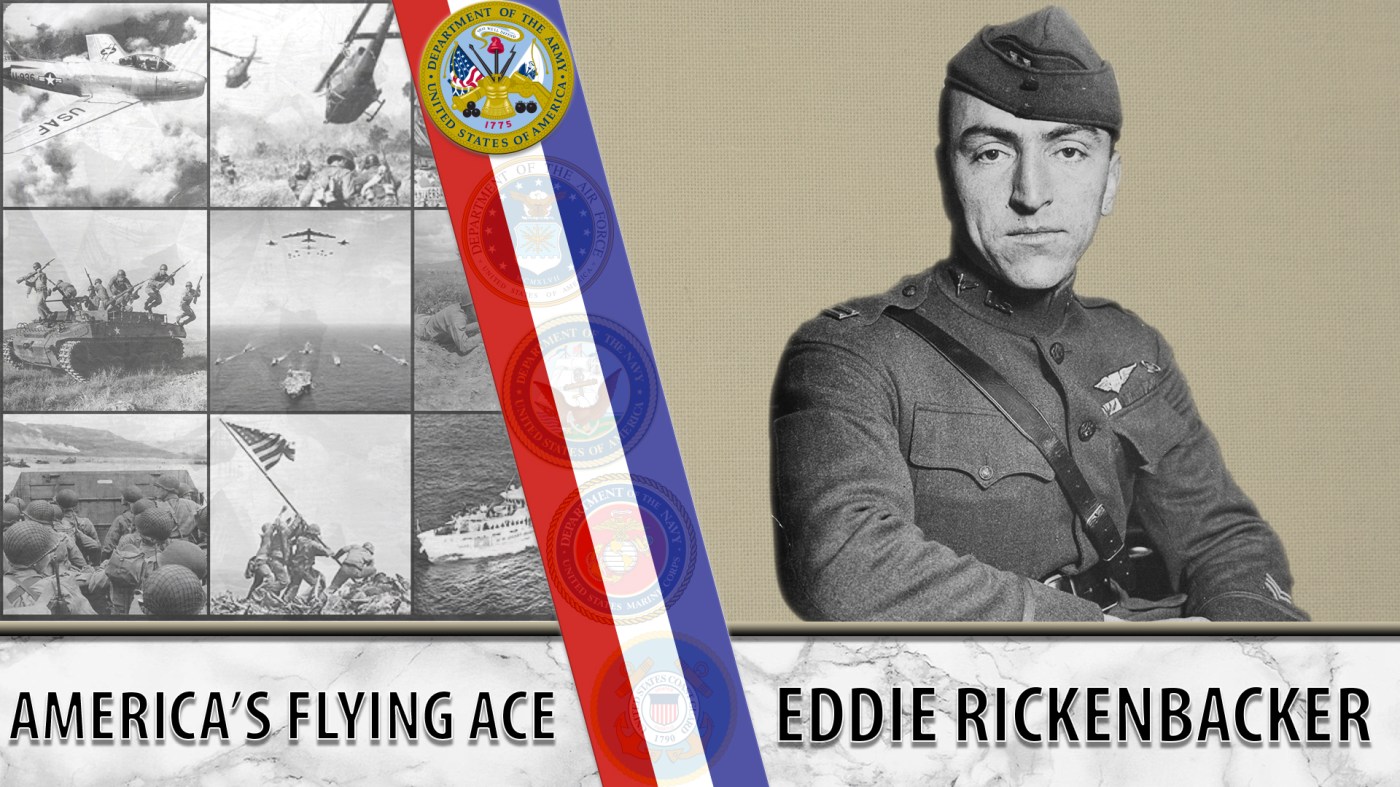 Born in Columbus, Ohio, Rickenbacker was a mischievous, but motivated child. As a young man, he began a career in the emerging field of motorsports, starting as a mechanic and eventually becoming a driver for the Maxwell Race Team. Rickenbacker gained moderate fame during his career as a race car driver, competing four times in the Indianapolis 500 and earning the name “Fast Eddie.”

Rickenbacker arrived in France on June 26, 1917 and was assigned as an engineer officer with the 3rd Aviation Instruction Center stationed in Issoudun, France. There, during his downtime, he practiced flying and became a highly skilled pilot. Despite possessing the skills and desire to fly, Rickenbacker continued to serve as an engineer officer as his commanders felt his skills as a mechanic were indispensable. After finding a qualified replacement, Rickenbacker convinced his superiors to reassign him as a pilot with the 94th Aero Squadron.

Rickenbacker’s service with the 94th Aero Squadron was exceptional, earning him the title of “America’s flying ace.” By the end of the war, he had amassed 26 air combat victories, the most of any American pilot during World War I. The most notable of these engagements took place on Sept. 25, 1918, when Rickenbacker encountered seven enemy aircraft while on a solo patrol. Despite being outnumbered, Rickenbacker engaged the enemy singlehandedly, downing two enemy aircraft and escaping the rest. He earned the Medal of Honor for his actions on that day.

Throughout his career as a pilot with the Army Air Service, he pioneered many air combat techniques and maneuvers. Following the Armistice, Rickenbacker returned to the United States and was discharged at the rank of captain. In addition to the Medal of Honor, he earned seven Distinguished Service Crosses, the Medal for Merit and several other awards and commendations, making him the most decorated American veteran of World War I. After leaving the military, Rickenbacker returned to the automotive industry, started his own car company and went on to found Eastern Airlines in 1926.

In 1942, following U.S. involvement in World War II, Rickenbacker was asked by Secretary of War Henry Stimpson to travel to the Pacific theater as an observer and report on U.S. Army Air Forces’ units stationed there. Rickenbacker agreed, placing his career on hold and traveling to the atoll of Kanton, located in Micronesia.

During the flight to Kanton, the navigational equipment aboard Rickenbacker’s B-17 became uncalibrated, leading the plane astray in the Pacific. As fuel ran low, the men prepared to ditch their plane over open ocean. When their B-17 finally ran out of fuel, the men landed the plane in rough waters, crashing violently into the sea. All seven men aboard survived the landing, but were injured to some degree following the impact. As water quickly filled the plane, the men struggled to retrieve their emergency rafts and supplies. After managing to escape, the men realized nearly all of their food and water had been washed away, leaving them with only four oranges and a handful of cherries.

The men subsisted on the fruit for six days. They attempted to catch fish with the hooks provided in their emergency kits, but without bait they had no luck. In their dire conditions, Rickenbacker took charge, encouraging his fellow survivors and refusing to let them give up hope. On the 8th day, the men had their first stroke of good luck when Rickenbacker managed to catch a seagull. After eating the bird, the men used the intestines for bait and began catching fish. Later, the men passed through a storm and were able to collect rainwater. Despite their stroke of good luck, Sgt. Alexander Kaczmarczyk, who had been sick before the crash, died on the thirteenth day from dehydration after consuming sea water.

On the 20th day, the men, increasingly desperate, decided to split up the rafts in hope of increasing their odds of being spotted. The idea was a success after one of the rafts was spotted the men were able to direct the Navy towards the other rafts. On the 23rd day, near death, Rickenbacker and the two other men on his raft were finally spotted by Navy sea planes and rescued.

After recovering, Rickenbacker went on to complete his mission and evaluated the Army Air Forces’ units in the Pacific. Hoping to further serve his country, in 1943 Rickenbacker undertook a fact-finding mission to the Soviet Union, securing permission to visit the nation under the guise of providing the Soviets with technical assistance for their American aircraft. There, he gained the favor of Soviet officials and obtained information on Soviet strategies and capabilities. After returning to the United States, Rickenbacker disclosed the information to American officials. For his efforts, Eddie was awarded the civilian Medal for Merit.

After the war, Rickenbacker continued running Eastern Airlines, living primarily in New York City. He remained a popular figure throughout his life, giving speeches on his experiences and visions. Rickenbacker passed away following a heart attack in 1973 at the age of 82.