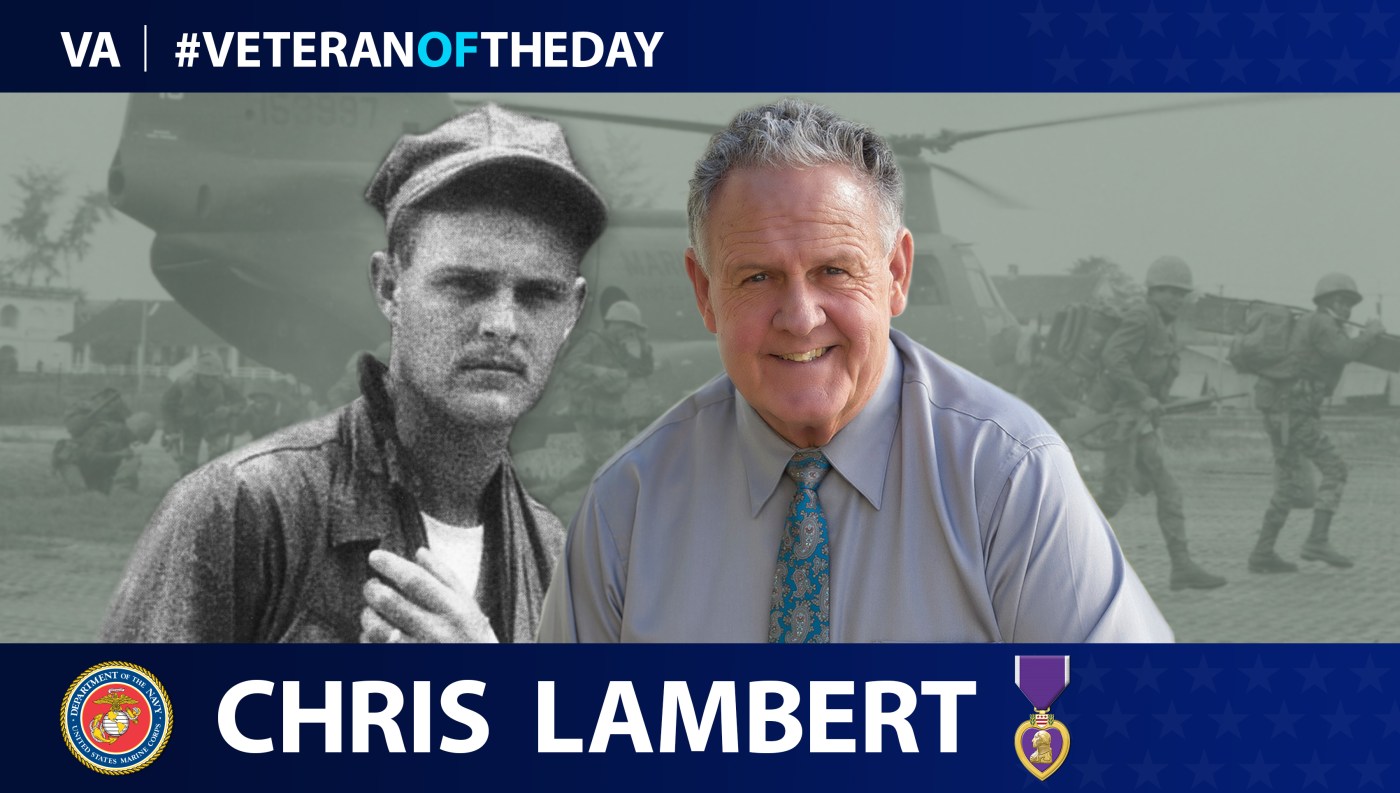 Veteran of the Day graphic created by Reynaldo Leal for the U.S. Department of Veterans Affairs.

After graduating from Venice High School in June 1967, Chris decided to follow in his father’s footsteps and enlisted in the Marine Corps. The California native arrived at Marine Corps Recruit Depot San Diego in August 1967, and then went on to train as a mortarman (0341) at Infantry Training Regiment at Camp Pendleton. Chris was then assigned to Alpha Company, 1st Battalion, 5th Marine Regiment (1/5) once he graduated from the School of Infantry.

He was soon shipped off to begin his combat tour with his new unit. He arrived in Vietnam the same day of the Tet Offensive, Jan. 31, 1968 and was told he would be a “straight up grunt” from that point on.

On March 31, 1968, when his unit was moved to Da Nang for some R&R after months of fighting in Hue, Chris would encounter the enemy in a prolonged fire fight that claimed the lives of 15 Marines and a Navy corpsman. There, by the Troui River Bridge, his unit was attacked and nearly overrun by Viet Cong in an area that was thought to have been secure. Chris would receive two of his three Purple Heart medals for wounds sustained in the fight. He eventually recovered from his wounds and continued to patrol with Alpha Company.

In May 1968, while conducting “search and destroy” missions, Chris was wounded once again, this time by an enemy booby-trap. This injury was serious enough to get him evacuated and then later sent to Japan. When he returned to the United States later that year, the Marine Corps gave him an honorable discharge after serving most of his two-year enlistment.

After a stint as a bill collector, Chris got into the auto financing market and was a successful businessman in California for several years before retiring. During this time, he said he never really talked about his service or what he had experienced in combat. Several years later, when he met the father of a fallen Marine from the war in Iraq, he said his psychological wounds from the Vietnam War finally became too much for him to address on his own. He decided to get help at his local VA in Sacramento and the Citrus Heights Vet Center.

“I believe we all get a lot out of talking to each other,” he said. “Sometimes . . . Veterans just need to talk to a fellow combat Marine and that does more than any drug or drink.”

For the past nine years, Chris has volunteered at the Sacramento VA’s chaplain office. He uses his personal story of service and recovery to connect with his fellow Veterans, and uses creative writing to express himself in a healthy way. A video of his letter “Goodbye Vietnam” has been viewed more than 50,000 times on social media.

We thank you for you service, and your continued commitment to your fellow Veterans, Chris.