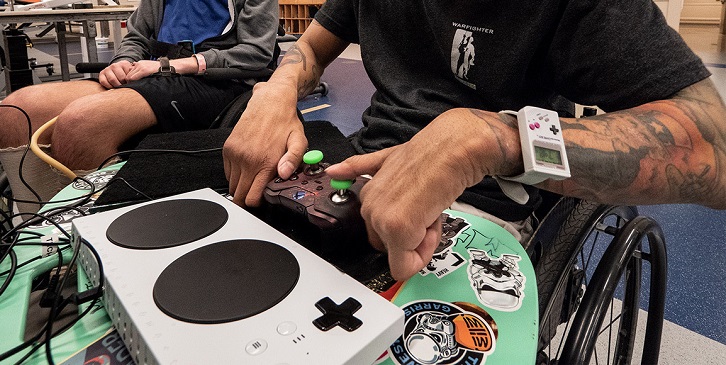 Recognizing the unique value of gaming for the military community, Microsoft is partnering with the U.S. Department of Veterans Affairs to provide Xbox Adaptive Controller units to 22 initial VA rehab centers across the U.S.

Launched in 2018, the Xbox Adaptive Controller was created to make gaming accessible to players with limited mobility by enabling them to customize their setups and connect with external devices like buttons, switches and joysticks that accommodate their playing. The controller, which can be used to play Xbox One and Windows 10 PC games, was developed after extensive consultation with gamers, accessibility advocates and nonprofits that work with gamers with limited mobility, including Veterans.

“People just want to participate, and it’s going to allow them to do that,” he says. “It allows for a much bigger population of people to be included in gaming.”

Gaming is a popular activity among the military community, but navigating a traditional controller can be difficult or impossible for injured Veterans. The inability to game can mean the loss of connection to Veterans’ military communities and to an activity that was a significant part of their lives during service.

The partnership with Microsoft aims to give Veterans with limited mobility the opportunity to game again, get them more involved with their rehabilitation and increase social interaction, says Dr. Leif Nelson, director of National Veterans Sports Programs & Special Events for the VA.

“We’re looking for platforms for Veterans to interact with each other, and the Xbox Adaptive Controller can be that access point to get involved in this world and in the gaming community,” Nelson says. “Gaming is now everywhere in the world, and while people tend to think of it as isolating, we’re finding that it actually has the opposite effect and can increase interactions with other Veterans and folks who are non-veterans. I think this can be a tool in the rehabilitation process to achieve a lot of different goals.”

For Jeff Holguin, gaming was a way to cope with the depression and post-traumatic stress disorder he experienced after being discharged from the U.S. Coast Guard in 2003 following an injury. He’d planned on a career in the military, but that identity was suddenly gone. Facing a series of surgeries and feeling adrift in the civilian world, Holguin isolated himself. He turned to gaming, an activity he’d enjoyed since childhood, and found the sense of inclusion he was craving.

“It gave me an outlet, a virtual efficacy within a world that I didn’t feel like I had a place in anymore,” says Holguin. “I made a lot of social connections and friends through that virtual space.”

Holguin went back to school, studying clinical psychology with a focus on trauma and PTSD. He has designed research for Microsoft around mixed-reality devices and learning outcomes and is also a clinical psychology doctoral intern at the Northern Arizona VA Health Care System in Prescott, Arizona. For Holguin, gaming provided a space where he could gradually reintegrate into post-military life.

“It was a sense of belonging and a sense of safety,” he says. “When you have trauma and you’re depressed, sometimes even just a little bit of stimulation is too much and you just don’t have the cognitive or emotional resources to deal with other people’s well-meaning interactivity.

“Gaming gives you what we might call exposure therapy, meaning you get a little bit of socialization, but when you’re ready to turn it off you can turn it off,” Holguin says. “Gaming provided some significant therapeutic value for me.”

Jamie Kaplan, a recreation therapist at James A. Haley Veterans’ Hospital in Tampa, Florida, has been using gaming as therapy with his patients — about 25 percent of whom have had traumatic spinal injuries — for seven years.

Kaplan, himself an avid gamer, says gaming provides a range of therapeutic benefits. Manipulating a controller and pressing buttons, for example, can help with motor skills. Decisions made throughout a game, from choosing which character to play to which moves to make, requires cognitive processing and visual processing, he says.

Kaplan used various gaming systems and consoles with patients before getting an Xbox Adaptive Controller last fall. He particularly likes the Copilot feature, which was developed for Xbox One and links two controllers as if they were one, allowing players to team up on a game and share controls. The feature quickly became one of Xbox’s most popular ones and was built into the Xbox Adaptive Controller.

One of his patients, Kaplan says, was able to play with his brother for the first time in three years by using Copilot. “It’s amazing,” Kaplan says. “It allows me as the therapist to make up for whatever deficit the patient has in utilizing a regular controller or the adaptive controller.”

Kaplan uses games ranging from sports and racing games to virtual reality games and programs that allow Veterans with limited mobility to try activities such as scuba diving, fishing or hiking. VR is useful for helping amputees work on balance, Kaplan says, and VR guided relaxation and meditation programs can help Veterans reduce stress and anxiety — and potentially reduce reliance on pain medications such as opioids.

“I see chronic pain patients every day and tell them, ‘I’m not going to cure your pain; we’re just hoping to trick it for a little while,’” he says. “You’re distracting them from the pain by engaging them in gaming.”

Gaming has been part of Mike Monthervil’s life since his childhood growing up in Carrefour, Haiti, a suburban area southwest of Port-au-Prince. Monthervil’s family was one of the only ones in the neighborhood with a gaming system, but electricity was only available for part of each day. When the lights would come back on, Monthervil recalls, “every kid would be banging on our door to come and play a game.”

For Monthervil, gaming was a passion that also provided an escape from a challenging environment. “It was a very tough place to live. Kids don’t have a lot to do there,” he says. “Gaming made my childhood better. It took a lot of stress out for me.

“To this day, I still talk to the guys who are over there that I grew up with, that are still going through the hardship of being there,” he says.

Monthervil continued gaming after moving to the United States and later enlisting in the U.S. Army. Stationed in Afghanistan, he passed time playing games with his fellow soldiers between missions. But in July 2014, Monthervil sustained a serious spinal cord injury after falling backward into a ditch during a training session, leaving him unable to use his legs. He underwent surgery and spent nine months at James A. Haley Veterans’ Hospital in Tampa, Florida. There he met Kaplan, who helped him adapt his gaming to accommodate the dexterity limitations caused by his accident.

Kaplan gave Monthervil an adaptive controller to try several years ago, but it was cumbersome and difficult for him to use. After getting an Xbox Adaptive Controller, Kaplan created a custom set-up for Monthervil by adding a few additional buttons. Monthervil recently got one of the controllers at home and says it works better for him than any device he’s tried since his injury.

“Of all the adaptive stuff I’ve tried, it’s by far the best one,” says Monthervil, who’s 26.

The Xbox collaboration is part of a strategic partnership between Microsoft and the U.S. Department of Veterans Affairs dating back more than 20 years. Recent efforts under the partnership have focused on equipping VA employees with productivity and collaboration technologies, migrating VA legacy systems to the cloud and using advanced analytics in VA call centers to give Veterans better information to make decisions about their benefits and medical care.

Toni Townes-Whitley, president of U.S. Regulated Industries at Microsoft, says the Xbox Adaptive Controller collaboration is part of a broader effort to improve therapeutic and clinical care for Veterans. But its fundamental goal is to harness technology to improve Veterans’ lives, she says.

“It’s an example of using technology as a means to a much more significant end, which is a sense of belonging, being part of a team, a sense of reconnection, a sense of family,” she says.

Phil Spencer, executive vice president of gaming at Microsoft, sees the collaboration as an ideal pairing of Microsoft’s efforts to increase diversity and inclusion in gaming with the vast reach of the VA, which serves more than 9 million Veterans nationwide in its health care system.

“Everyone can play games, and we really focus on that as an organization,” he says. “With the VA being the largest integrated health care provider in the U.S., we thought it was a perfect opportunity to bring our focus on gaming and the great work that the VA is doing together.”

Microsoft will use feedback and data collected by the VA centers to determine how effective the Xbox Adaptive Controller is in serving Veterans and how the device might be improved going forward, Townes-Whitley says. Nelson believes the initiative will serve not just existing gamers, but also Veterans who weren’t previously into gaming.

“If we do our job well and we’re able to expose Veterans to (the Xbox Adaptive Controller) as a possible tool or intervention in their rehab process, I expect to find successes even in those folks who have never gamed before in their lives,” he says.

A 2018 study found that gaming can relieve stress for Veterans, help them cope with moods and provide a way to connect. Kaplan also sees the Xbox Adaptive Controller as an equalizer for Veterans and others with disabilities.

“One of the biggest things kids and adults with disabilities face is the stigma of being different. Online, we’re all the same,” he says. “I could be missing my arms or my legs and you wouldn’t know it. Gaming really helps to promote that feeling of normalcy and feeling of belonging.

“I have a lot of respect for Xbox seeing and filling a need for making something that allows military members and anyone who has a disability to be able to game,” Kaplan says.

“I think it’s great for a mainstream company like Microsoft to be the one to take the first step. I hope it encourages other companies to do that.”

For more examples of how individuals with disabilities can utilize the Xbox Adaptive Controller, check out the introduction video from the Xbox YouTube account: