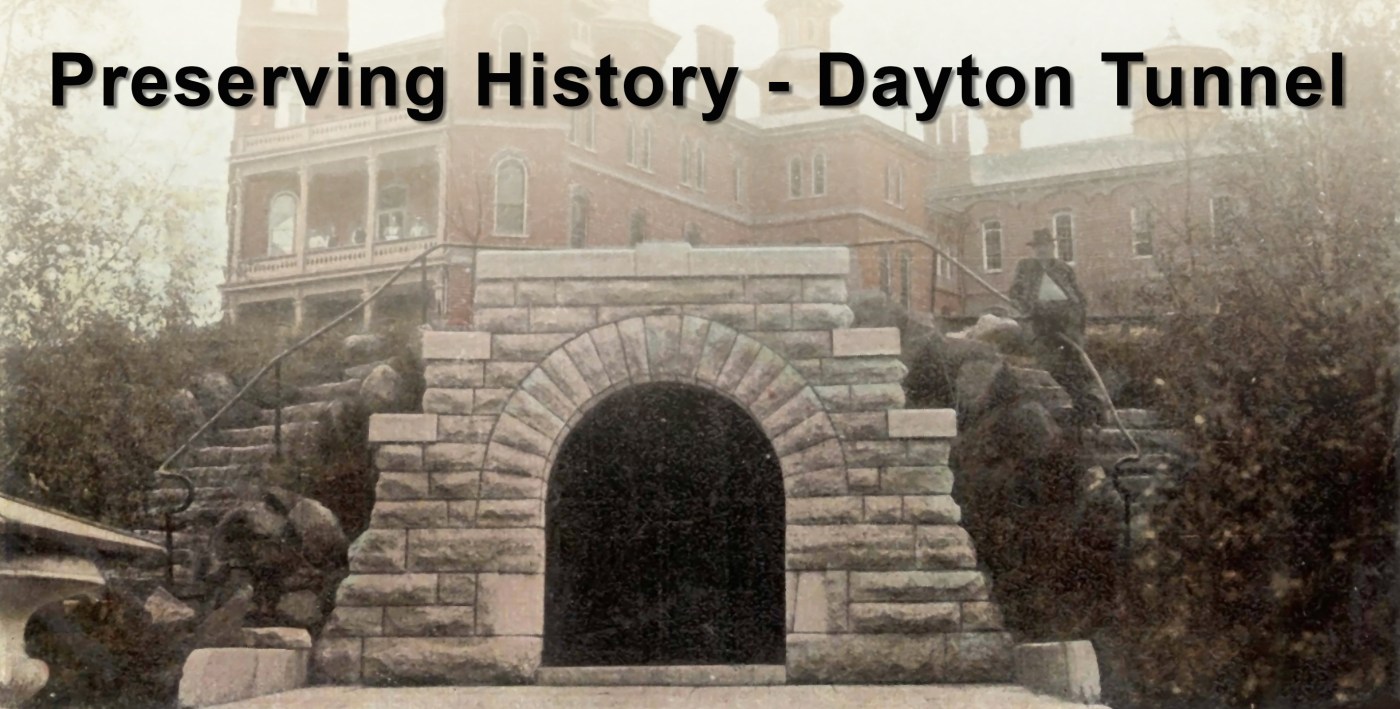 The Central Branch of the National Home for Disabled Volunteer Soldiers (NHDVS) opened in Dayton, Ohio, in 1867, as the third facility of its kind to house and care for Union veterans of the Civil War. Nearly 600 Veterans were accommodated immediately. “Inmates,” as they were known, were eventually buried in what is now Dayton National Cemetery. The elegant campus where the men lived, worked, learned, worshiped, healed—and eventually died—also contained a lesser-visited structure, the “tunnel of death.” The arched tunnel connecting the cemetery and the hospital featured rustic stone and a metal gate.

Today this unusual historic resource is barely recognizable: the tunnel opening filled in, the nineteenth-century stonework missing, and the slope and flanking steps eroding. General interest in its preservation was just that until summer 2018 when the Dayton National Cemetery Support Committee (DNCSC) donated “historic preservation planning services” to the cemetery. On May 3, 2019, apropos timing for National Preservation Month, the team responsible for studying the historic tunnel presented its findings and alternatives to DNCSC and NCA as the first step toward rehabilitation.

The tunnel is approximately 8-foot wide and 7-foot tall and was likely built in 1870 to contain steam and water pipes, and a small railway to transport coal. Thereafter it was used to convey the deceased from the hospital to the cemetery. In the mid-1870s the Central Branch housed more than 4,000 Veterans, a number predicted to rise in coming decades; concurrently, the number of deaths peaked at 1,400 toward the end of the century. To meet this need, a “new receiving vault” was built in 1887 in a portion of the tunnel, presumably near the cemetery opening, which was described as a “very great convenience to the institution.”

In a Cincinnati Enquirer story about life at the home in 1891, one Veteran said, “Our little cemetery over yonder is growing larger and larger.  Not a day passes that does not see one or more of us go through the tunnel.”

When the casket containing the soldier’s remains reaches the outer entrance to the tunnel a guard in waiting unlocks the heavy iron gates, which swing open and the casket is received by the funeral corps and placed in the hearse in waiting. A line of forty or more soldiers has already been formed. The casket is borne to the church where the funeral services are held. Then the procession forms in line and the cemetery is reached in a short time.  The body is interred and a salute is fired, and all is over.

DNCSC’s donation is the first step in a broader campaign to energize preservation efforts with the National Cemetery Administration (NCA) to engage the public with Dayton’s rich heritage.  The support committee is a valuable stakeholder in the cemetery, because despite compelling historic justification for preserving the tunnel entrance, VA Federal funding is routinely directed to cemetery operations.

This Ball State proposal includes alternatives to access and interpret the tunnel, as well as several other significant cemetery resources, i.e., the Monument Circle and Soldiers Monument (1877) and former gate house (1868).  NCA will consider the alternatives in concert with future proposed donations by DNCSC, which has indicated an interest in ongoing financial support of the tunnel preservation project.  The significance of the Dayton NHDVS campus was recognized by National Historic Landmark designation in 2012, and this is the only funeral tunnel in the NCA system. It is one of 11 Federal cemeteries established as part of the NHDVS; all were transferred to the Veterans Administration in 1930.

During the late nineteenth century, the Central Branch was also an enormous popular tourist attraction. Thousands of visitors traveled there to mingle with aging Veterans, meander through the grand landscaped grounds, and pay respects at the solemn cemetery.  Enhanced interpretation and outreach, and preservation of the funeral tunnel based on the partnerships among NCA and DNCSC, may introduce a new generation of visitors to historic Dayton National Cemetery to learn its stories.