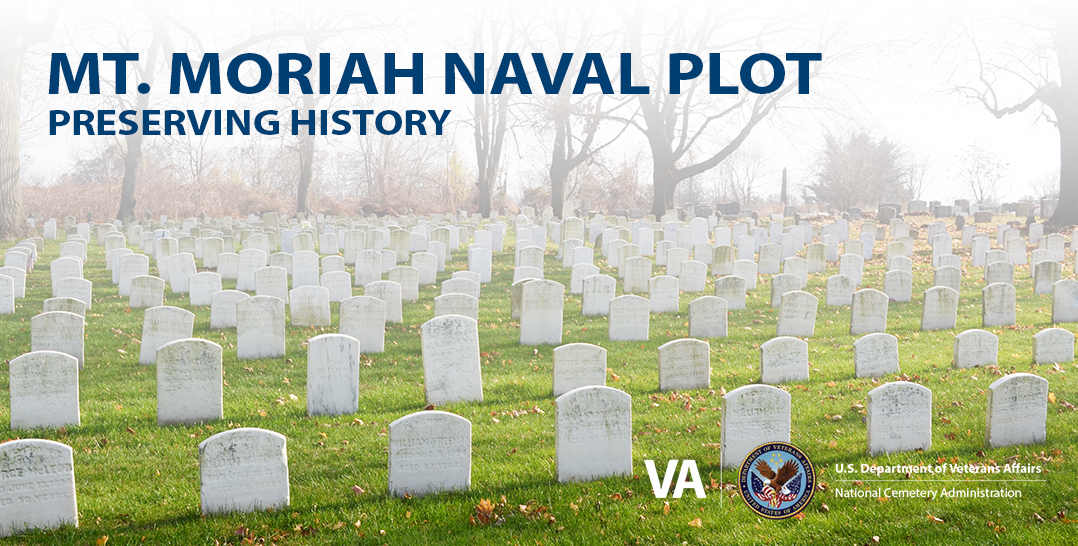 May is recognized as National Preservation Month and celebrates our nation’s heritage through historic places. Mount Moriah Naval Plot is one such place that the National Cemetery Administration (NCA) is actively working toward preserving. This 10-acre burial site is located within the private Mount Moriah Cemetery—approximately 200 acres spanning Cobbs Creek with land in both the City of Philadelphia and neighboring Delaware County. The naval plot was used by the U.S. Naval Home and the Philadelphia Naval Shipyard from 1865 to 1976 for the burial of retired sailors and marines who resided at the home as a benefit of their service and of active duty service personnel who died in the Philadelphia area.

View of Section 2 showing graves of U.S. Naval Asylum/Home “beneficiaries”. Monuments in the private cemetery are visible in the upper right corner.

Mount Moriah Cemetery was established by the Pennsylvania Legislature in 1855—one of several rural cemeteries developed in the Philadelphia area between 1845 and 1860. Located on the southwestern edge of the city, Mount Moriah originally consisted of 54 acres. Over time, the cemetery grew, and many churches and other organizations established private lots within its bounds.

In 1864, the federal government purchased a plot on the northwest side of Mount Moriah Cemetery. The intended use was for the re-interment of remains from a cemetery on the property of the U.S. Naval Asylum. The asylum, established in 1811 by an act of Congress, was located on the east side of the Schuylkill River along Grey’s Ferry Road by 1826. In 1889, the name of the institution was changed from the U. S. Naval Asylum to the U. S. Naval Home. It remained in operation until 1976, when the remaining pensioners were transferred to a new facility in Gulfport, Mississippi.

With the closing of the naval home, the Department of the Navy sought to transfer ownership of its burial plot at Mount Moriah. On July 18, 1977, the Veterans Administration (today’s Department of Veterans Affairs or VA) officially accepted custody and accountability from the Navy for the burial plot.

More than 2,000 Navy and Marine Corps officers and enlisted men have been buried in Mount Moriah Naval Plot since the first interment took place on March 26, 1865. Among these decedents are “beneficiaries” who resided at the asylum/home as a benefit of their naval service (Section 2-4), active duty naval and marine personnel who died in the Philadelphia area (Section 1), and governors of the naval asylum, officers of the Navy and Marine Corps, and their family members (Section 5). Only a few burials took place after the transfer to VA—the last one in December 1996. (Figure 1)

Limited documentation was provided to VA when the lot was transferred by the Navy. VA conducted, under contract, a grave-by-grave survey in 1978, but the whereabouts of this survey are unknown. In February 1981, NCA conducted a more comprehensive survey of the plot but even this was found to be flawed.

Beginning in October 2016, NCA began a more extensive survey of the grounds and the written record. Project objectives included 1) addressing accountability issues such as burial locations, decedent names, and other data including dates of death and interment, service affiliations and ranks, and 2) providing clear and concise recommendations for the restoration of all burial sections.

The Mount Moriah Naval Plot is unique among NCA cemeteries—in addition to the standard government-issued headstones and private markers, there are five distinct types of headstones purchased by the Naval Home, present in the plot. These headstones were made for the home by local monument companies.

In 2017, NCA partnered with the U.S. Army Corps of Engineers’ Construction Engineering Research Laboratory (CERL) to conduct 3-D laser scans of the “Naval Home” headstones. The data collected during the survey was used to produce drawings for these distinct headstones and will allow NCA to replace deteriorated headstones with historically accurate replicas matching the size, scale, inscription and font of headstones dating from 1830-1870. (Figure 2)

In addition to the different headstone types, two other elements distinguish this plot from other NCA properties. A chain-and-granite-bollard fence was installed around the perimeter in 1874—several of the bollards are engraved with “U.S.N.” Seven years later, a 12-15,000 lbs. anchor from the Philadelphia Naval Yard was set atop a granite-block base on an earthen mound located northwest of Section 5 (the Officers section). Both of these features were restored with work completed in February 2017. Also completed at that time was a reinstallation of a flagpole and the gravel roadways within the plot.