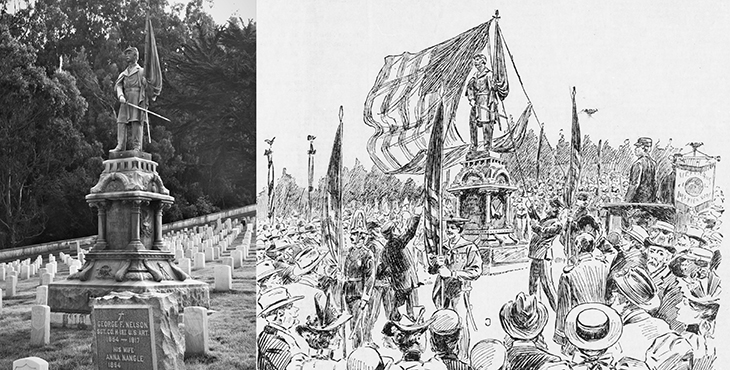 As of May 2019, there are more than 1,330 monuments in NCA cemeteries. Approximately 24 monuments are donated annually to VA as permanent memorial objects. They take many shapes and sizes, and use a variety of materials, to honor the service and sacrifice of servicemen and women who have served in both times of war—from the Revolutionary War to today—and peace. Recent installations include a Blue Star Memorial at Springfield National Cemetery, MO (right); monuments to Vietnam Veterans Port Hudson National Cemetery, LA, and Camp Nelson National Cemetery, KY; and a monument to women who serve at Calverton National Cemetery, NY (below).

Monuments appeared in the national cemeteries within the first decade after the Civil War, donated by regimental units, state governments, and veterans’ organizations such as the Grand Army of the Republic. A popular time of year for monument dedications was May, particularly Memorial Day.

Monument to women who serve at Calverton National Cemetery, NY

The Pacific Coast Garrison monument was dedicated on Memorial Day 1897 in San Francisco National Cemetery.  The cast-zinc monument—referred to as “white bronze” by manufacturers of the time—is approximately 17 feet tall and features a soldier with his sword drawn defending the U.S. flag atop a pedestal. The inscription reads: Dedicated to the Regular Army and Navy Union of the United States of American by the Pacific Coast Garrisons Memorial Day, 1897.

Local newspapers covered the Memorial Day event and the monument unveiling. As reported by the San Francisco Examiner, General William R. Shafter, speaking on behalf of the government stated: “I accept on behalf of the United States Government this monument which you have erected in memory of your comrades. It will long stand as a befitting honor to those who have given it, and a beautiful remembrance of those to whom it is erected. Personally, I wish to thank you all for your assistance in arranging this tribute to our honored dead.”

NCA oversaw a full restoration of the monument in 2010.

The surface was cleaned, a reproduction zinc sword and scabbard were installed, the mortar joint were repointed and the landscape immediately adjacent to the rear of the monument was regraded to improve drainage around the granite base. This is one of few zinc monuments and private grave markers located in NCA properties. The material gained popularity in the 1870s and was marketed as a less expensive alternative to granite. Left in its natural gray-blue finish, from afar it resembles stone. It could also be painted to mimic bronze.