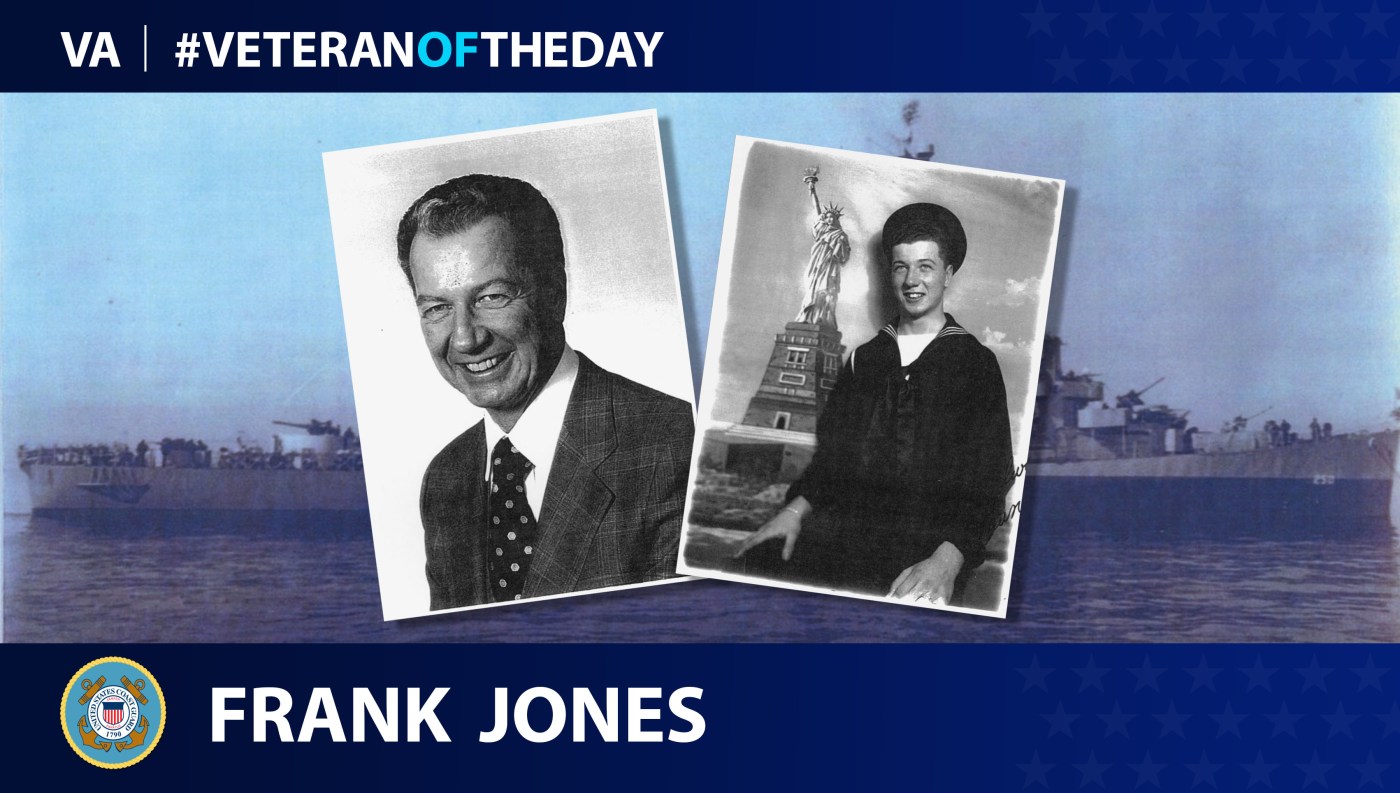 Veteran of the Day graphic created by Cynthia Tong for the U.S. Department of Veterans Affairs.

Today’s #VeteranOfTheDay is Frank Jones. Frank served as Seaman First Class in the Coast Guard during World War II from 1944 to 1945.

Frank was born in Detroit and enlisted in the Coast Guard at the age of 17 with hopes of being a pilot. He served as a platoon leader at boot camp in Manhattan Beach in Brooklyn, New York in 1944.

After boot camp, Frank was assigned to the USS Hurst Destroyer Escort 250, which was in the 20th division of the Atlantic fleet along with four other Destroyer Escorts. “As a bright-eyed 17-year-old, I mean it was an experience,” Frank said of his time on board. One of the first missions was to escort ships to the English Channel right outside of Portsmouth, England. They docked in South Hampton and the seamen were allowed a 16-hour pass to explore London. “We took the train to Trafalgar and went to the Rainbow Center, which is where all the GI’s went. There were GI’s from all over the world – Australia, Poland, France,” Frank said.

After returning to the United States on a return mission, Frank set out again on the USS Hurst on a mission to search the islands of the South Pacific for survivors “of any vessels or planes that had gone to an island, and to also look for any enemy units of any type and take what action was necessary.” Frank named each island they searched including: the Solomons, the Marshalls, the Gilbert, the Admiralty, and the Marianas. During this mission, Frank’s division would also go on war cruising watches that called for battle stations for 30-45 days at a time.

Frank commented on the end of World War II saying “It is without question the 7th Pacific fleet and the 3rd Pacific fleet would have shared in the invasion of Japan with our other forces had it been necessary to do, but thank god for the atomic bomb. It saved so many lives, not only ours but theirs.” His mission continued into November 1945, past the war’s end, because of the Pacific fleet command’s uncertainty that all enemy units in the region had been informed of Japan’s surrender. His final discharge came on May 2, 1946.

Frank went on to take classes in Business and Accounting at Walsh University using the GI Bill, before following in his father’s footsteps to become a third generation brakeman and railroad conductor. Later in his career, Frank was appointed CEO of the Alaskan Railroad by President Jimmy Carter and was recognized by President Reagan for his role in facilitating the export of Alaskan coal to South Korea. After retiring in 1989, Frank served as an Honor Guard with the American Legion and Veterans of Foreign Wars of Fort Collins.  Frank Jones passed away after battling Alzheimer’s disease on Aug. 14, 2018.