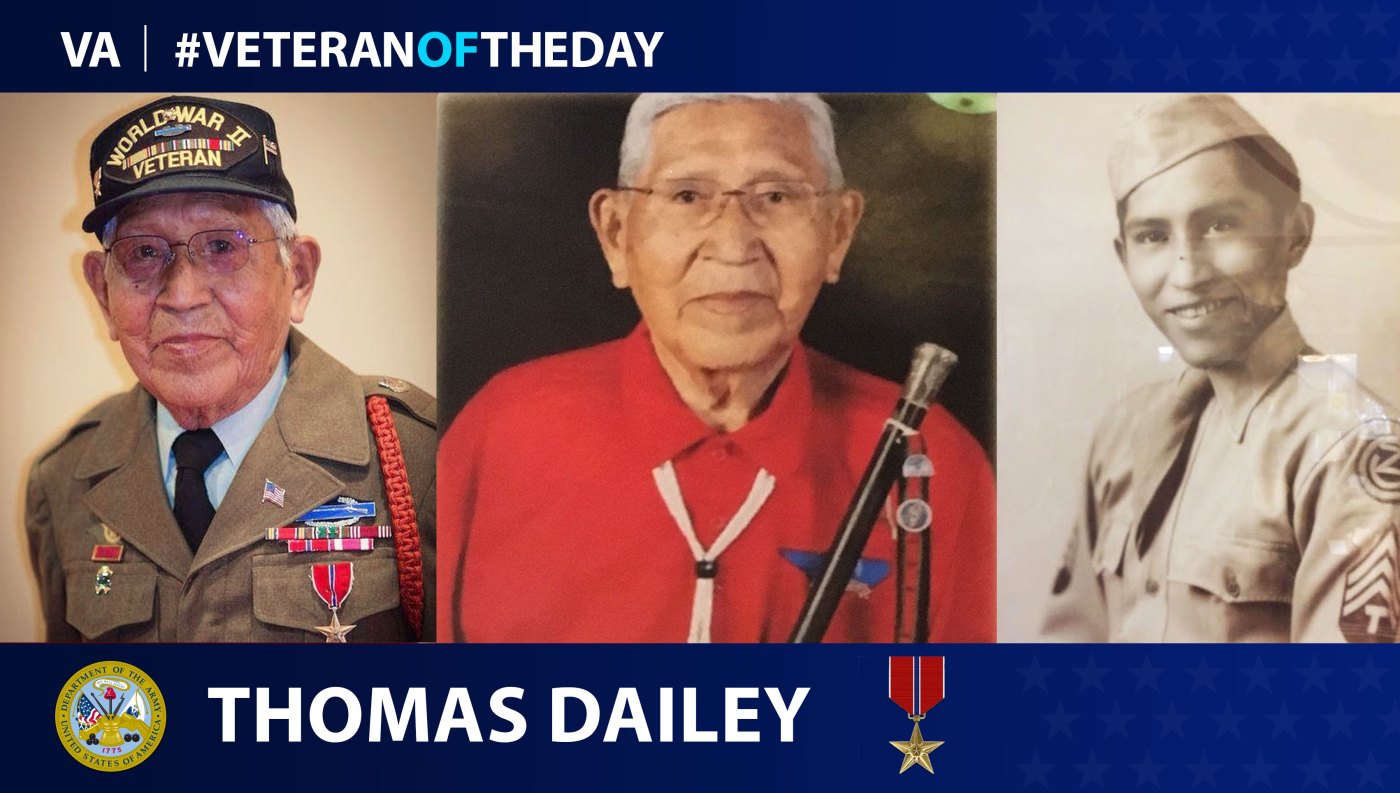 Today’s #VeteranOfTheDay is Army Veteran, Thomas Dailey. Tech Sergeant Thomas Walter Dailey passed away on February 13, 2019 at age 100.  He was born September 18, 1918, and raised on the Pueblo of Laguna Reservation, located 50 miles west of Albuquerque, NM.  Mr. Dailey served as Governor of the Pueblo of Laguna for six terms.  He was a World War II veteran and served in the 102nd Infantry Ozark Division where he and his company landed on the shores of Cherbourg, France and fought in the Battle of the Bulge.  Mr. Dailey was awarded the Bronze Star and earned four battle stars.  His company fought and traveled through France, Belgium, Germany, Holland, Austria and Czechoslovakia. He met the Russians on the Elbe River at the end of the war.

While in the service, Mr. Dailey learned the trade of auto-mechanics and upon returning to his reservation opened an auto-mechanic business – The Dailey Bros. Garage – along Route 66 in New Mexico.  During that time, the men of the Pueblo appointed him to serve as Governor in 1954 and again in 1955.  He later enacted legislation to allow for Pueblo officials to be elected by the general population and would win the first general election held by the Pueblo and win three more terms in the 1960s and 70s.  Throughout his tenure as a tribal official he helped navigate the route through the Pueblo that would become Interstate-40, secured funding for a hospital that would serve his community and established the Laguna Rainbow Center to care for the elders of his community. He also served on the committee that approved what was at once the largest open-pit uranium mine in the world, located on the Pueblo.  Mr. Dailey was a well-known tribal leader throughout Indian Country, recognized for his service to his people.  This community service carried over to other tribal communities such as the Haskell Indian Nations University where Mr. Dailey served on the Haskell Board of Regents.  He was also an invited speaker at numerous national Native American conferences.

Mr. Dailey, was a public servant for the Pueblo, formed a color guard of Laguna Pueblo veterans and a respected elder of the pueblo who was known for his ability to compose and sing many traditional songs.  He was an avid hunter, farmer and fluent speaker of the Laguna language.  Mr. Dailey is known for being an avid baseball fan.  He organized the first baseball games on the Pueblo of Laguna.  He played the sport he loved and over the years followed the Atlanta Braves attending several games in Atlanta, Phoenix and Denver with his family.

We honor your service, Thomas.