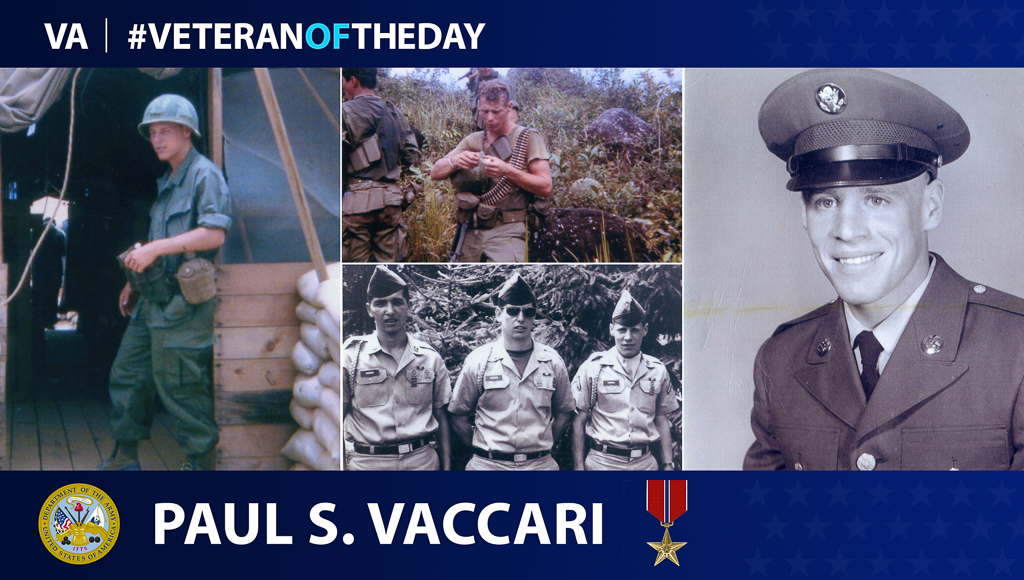 Today’s #VeteranOfTheDay is Army Veteran Paul S. Vaccari, who served in Vietnam from 1968-70.

Paul S. Vaccari was born in Winsted, Connecticut, and volunteered for the draft to serve in the Army in 1968. After reporting for duty, Vaccari completed eight weeks of basic training at Fort Dix. After volunteering for infantry, Vaccari was sent to Fort Polk for nine weeks of advanced infantry training in medium and small arms.

After completing training, Vaccari deployed to Vietnam and was flown into Cam Ranh Bay. Upon landing, he was assigned to the 196th Light Infantry Brigade and sent to Chu Lai. Initially, Vaccari served as a kitchen cleaner while receiving extra training on traps and small arms.

Eventually, Vaccari was assigned to a recon company and positioned south of Da Nang on Hill 932 with a squad of 10 other soldiers. There, Vaccari and his fellow soldiers staged reconnaissance patrols while monitoring enemy activity in the area. Vaccari spent the bulk of his deployment around Hill 932. His unit suffered heavy casualties.

By 1969, Vaccari was promoted to squad leader, and exited service in 1970 from Fort Lewis. For actions during his service, he earned a Bronze Star, a Good Conduct Medal and a Combat Infantry Badge.

After leaving the service, Vaccari returned to his former job at a ball bearing factory. After growing tired of his factory job, he quit, then became a police officer. While serving as a police officer, Paul took night classes and earned an associate degree in Criminal Justice.