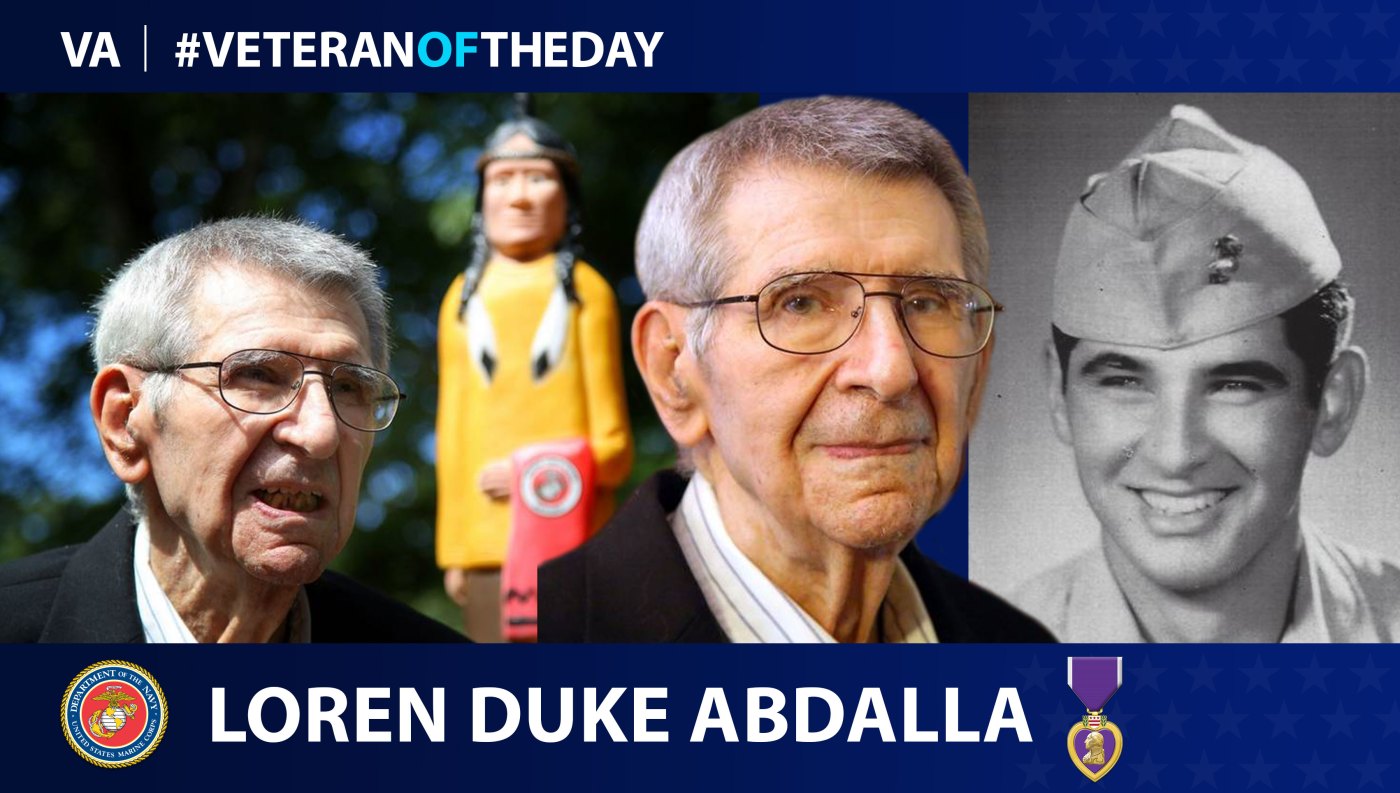 Today’s #VeteranOfTheDay is Marine Corps Veteran Loren “Duke” Abdalla, who served at Peleliu and Okinawa in the Pacific during World War II.

Lore Duke Abdalla was born in Wagner, S.D., in June 1925. He was a member of the Yankton Sioux tribe and his great grandfather was Chief Running Bull.

Abdalla enlisted in the Marine Corps in October 1943. He graduated boot camp from Camp Elliott, San Diego, where he trained as an infantryman and machine gunner. He was assigned to be a member of the 1st Platoon, A Company, 1st Battalion, 1st Marine Regiment and 1st Marine Division.

Abdalla deployed aboard USS Polk to the Pacific theater in March 1944 alongside fellow Marine Bill Veeck – future Baseball Hall of Famer and owner of the Chicago White Sox. Abdalla was originally stationed in what today is the nation of Palau.

In September 1944, Abdalla saw his first combat action during the Battle of Peleliu, where he was seriously injured after taking shrapnel wounds to both legs and blowing out both eardrums. He was one of 29 survivors in his battalion. He was awarded the Purple Heart.

Returning to service following his injuries, Abdalla fought at the Battle of Okinawa in May 1945. In the battle, his squad leader received severe burn wounds; Abdalla rescued him from harm’s way, then returned to battle and took out six Japanese machine gun nests. Later, he saved two more service members.

In February 1947, Abdalla was honorably discharged.

Abdalla moved to Fox Lake, Ill. After hearing about his actions during the war, local politicians lobbied for Abdalla to receive the Medal of Honor. In 2010, he was recognized by the Illinois General Assembly with a resolution encouraging President Barack Obama to consider him for the prestigious award.

Abdalla died in December 2016. He was 91. Upon his passing, U.S. Sen. John Thune, from South Dakota, memorialized Abdalla on the floor of the United States Senate, enshrining his actions in the public record of American history.