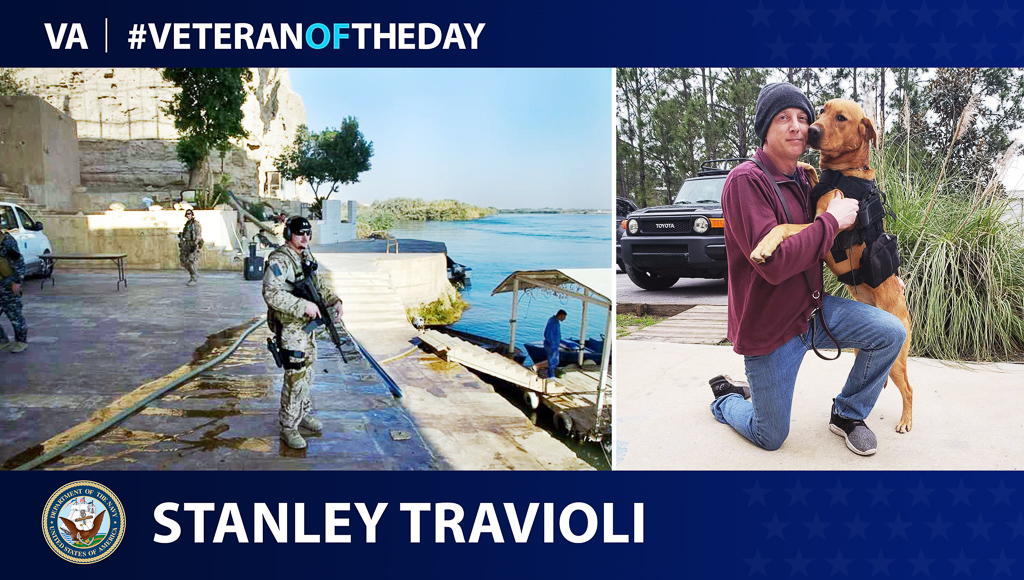 Today’s #VeteranOfTheDay is Navy Veteran Stanley Travioli, who served as a combat cameraman during 16 combat tours over the span of 26 years and 10 months.

In honor of International Assistance Dog Week, we recognize veterans and their service dogs for their resilience and hard work. Navy Veteran Stanley Travioli is one of these veterans.

During his time in the Navy, Travioli served combat tours in Afghanistan, Iraq, Somalia, Bosnia and other locations.  He served in 119 countries and deployed with the SEALs, Explosive Ordnance Disposal, Seabees, 2nd Marines, 1st Marines, 82nd and 101st Airborne and several other units.  Along with many other honors and awards, he received a Presidential Unit Citation, two Defense Meritorious Service Medals, and two Combat Action Ribbons.

However, PTSD and other physical ailments from military service called for the use of an assistance animal. Travioli retired from service February 2019 as a senior chief petty officer and received his service dog, Marshall, later that month from the Pawsitive Love Foundation in Destin, Florida. Marshall is a red fox Labrador Retriever that is primarily a mobility assistance dog along with emotional support. Travioli sustained significant hearing loss along with PTSD, and he credits Marshall with saving his life and having his back. Before Marshall, daily life was a tremendous obstacle both physically and emotionally, but with Marshall’s assistance, Travioli can function outside of what he thought was going to be his new difficult norm. He can now go out with family, participate in his son’s activities, and go back to his hobbies.

“I struggled learning how to use Marshall properly, but he was patient with me…especially when you’ve honed your skills to be aware of what is happening around you, looking for dangers and things that are out of place. Trusting him to watch out for you, and to turn off some of your senses is a challenge.”

Travioli now resides in Dover, Delaware, and spends time relaxing with his family, all with the support of Marshall.