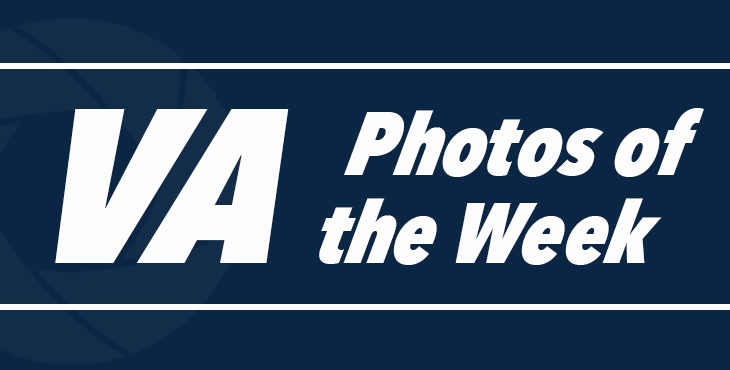 VA Photos of the Week highlights the connections made between our employees and the Veterans they serve every day at VA medical centers, regional offices, and national cemeteries across the country.

This week, photographers from California, New York, Texas and North Carolina shared their best images with us.

WWII Veterans honored at a presentation of wreaths at a remembrance ceremony at the World War II Memorial in Washington, DC, for paratroopers and glidermen of the Army’s 82nd Airborne killed while liberating Europe. Photo by Tanner Iskra, VA Central Office.

Vietnam Veteran Roy Johnson receives a medical exam from Moneeza Matin, Physician Assistant with VA North Texas Health Care System, in the vehicle used by the Homeless Mobile Medical and Mental Health Veterans (HMMMV) team. The HMMMV team goes out to local homeless shelters to reach out to Veterans to provide medical exams, assist in enrollment in VA healthcare, housing screenings and other resources. Johnson has been staying in a Dallas homeless shelter and was able to set up his next medical appointment at the Dallas VA Medical Center with the assistance of the HMMMV team. Photo by Jennifer Roy, VA North Texas Health Care System

Heroes on the Hudson 2019: Marine Corps Veteran Rich Hughes, assisted by volunteers, gets ready to sail on the Hudson. This is the 9th year for the adaptive sports event giving disabled Veterans the chance to enjoy kayaking and sailing. Photo by Claudie Benjamin, public affairs officer, VA New York Harbor Healthcare System.

U.S. Army Veteran and Purple Heart recipient William Baxter was an Infantry Squad Leader and served from 1967-1970. Baxter was awarded the Purple Heart Medal from injuries while in Vietnam. Baxter took shrapnel to his neck after a grenade went off in a tree above his head while his company was on patrol. After Baxter was injured, he was sent back to base camp for a month to recover, later returning to his unit. Photo by Jennifer Roy, VA North Texas Health Care System.

VA Secretary Robert Wilkie and Sen. Thom Tillis (R, N.C.) stop to admire a display case housing donated Veterans’ memorabilia starting to take shape in the lobby of the Wilmington Heath Care Center. Secretary Wilkie and Senator Tillis are flanked by VISN 6 Network Director DeAnne Seekins and Fayetteville VA Director Daniel Dücker, who joined the duo during a walk-through tour of the facility Aug. 6. The display case stems from an idea that began when a 93-year WWII Veteran donated a military cap to his provider and as the word spread and the caps, coins, patches, etc. began multiply, the idea of having a public display of items took shape. A local jewelry store donated the 1940’s-era cabinets and now a place for Veterans, staff and visitors to catch a glimpse of the donated treasure exists. Wilkie and Tillis’ two-day visit to the state included stops in Fayetteville, Elizabethtown, Wilmington and Butner. Photo by Brad Garner, Fayetteville NC VA Coastal Health Care System.

VA Photos of the Week

Photographer va photos of the week