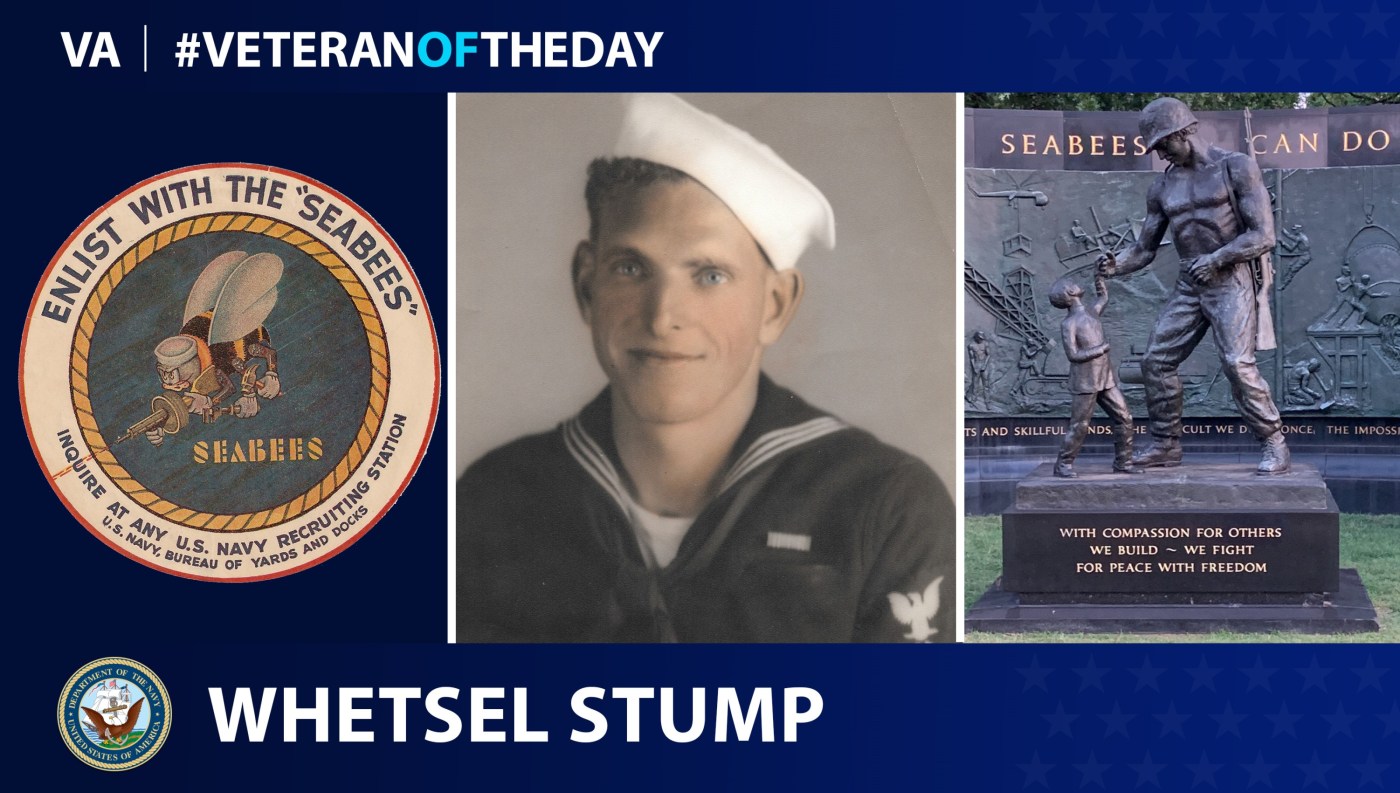 Today’s #VeteranOfTheDay is Navy Veteran Whetsel M. Stump, who served as a Seabee in Alaska, Saipan and Okinawa during World War II.

On March 5, 1942, all Construction Battalion personnel were officially named Seabees by the Navy Department.

Whetsel M. Stump was one of those early Seabees. Born March 9, 1916, in Perkins, West Virginia, Stump later served as a member of the Civilian Conservation Corps and a pipefitter for the American Shipbuilding Company in Lorain, Ohio. He joined the Navy Dec. 14, 1942.

After graduating basic training and technical training, he served with the 21st Naval Construction Battalion, known as “The Blackjacks.”

While serving at Dutch Harbor, Alaska, March 1-Dec. 4, 1943, Stump and fellow Seabees fought ice, snow, rain and high winds to build infrastructure for U.S. forces. With Japanese forces close by, the threat of enemy attack was a constant concern. Despite this threat, Stump was one of 29 men cited in a Nov. 9, 1943, commendation letter for plumbing, piping and steam fitting on the hangar, clothing renovating plant and diesel electric power house.

Following Alaska, Stump spent seven months in California and Hawaii before heading with his unit to Saipan. He arrived March 20, 1945, spending the next three months preparing supplies and equipment for the eventual landing on Japan.

Stump and other members of the 21st landed on Okinawa June 17, 1945, as the battle for the island–Operation Iceberg–was nearing completion. According to Naval historical records, the Seabees’ task on Okinawa was truly immense. On this agrarian island, whose physical facilities had all but destroyed in the war, they built ocean ports, a grid of roads, bomber and fighter fields, a seaplane base, quonset villages, tank farms, storage dumps, hospitals and ship repair facilities. Two months into their Okinawa deployment, Stump and fellow Seabees heard an Aug. 15 radio announcement–Japan had unconditionally surrendered.

Whetsel and Juanita Stump in 1943.

Stump instilled a proud military tradition in his family, as his two sons served during Vietnam, one in the Navy and the other in the Army; his grandson served in the Air Force. He spent the next three and a half decades as a laborer in Ohio married to his wife, Juanita.

For more information about the Seabees during World War II, see the Naval History and Heritage Command.