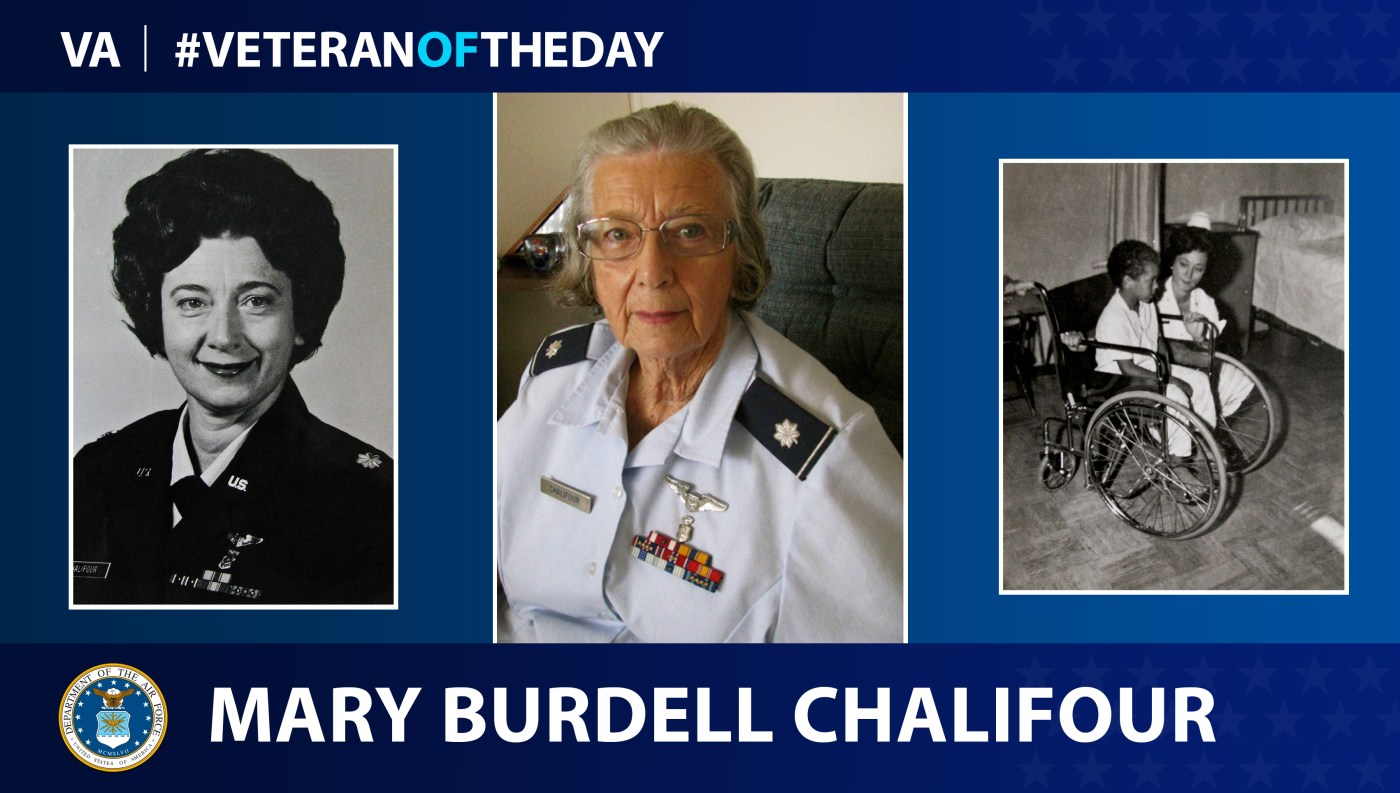 Today’s #VeteranOfTheDay is Air Force Veteran Mary Lee Burdell Chalifour, who served as a nurse in the United States, Japan, and Germany from 1958-1978.

Mary Lee Burdell Chalifour was born in 1935 in Charlotte, North Carolina. After graduating high school, she attended Queen’s University of Charlotte, where she received a bachelor of science in nursing. Soon after finishing her schooling, she joined the Air Force Nurse Corps with a friend and fellow classmate on Oct. 16, 1958.

After basic training, Burdell Chalifour went on her first assignment to Wilford Hall Medical Center of San Antonio, Texas, as a second lieutenant. At the time, the medical center was the largest Air Force base hospital in the world with 1,000 beds. From 1958 to 1960, Burdell Chalifour worked primarily in the surgical/intensive neurosurgical ward. The first years of her service took place during the calmer years of the Cold War. She dealt mostly with head trauma from car crashes and other accidents. The medical center served people from all over San Antonio, both civilian and military.

In 1961, Burdell Chalifour shipped to Tachikawa Air Base outside Tokyo, Japan, where she promoted to first lieutenant. She served primarily on the female ward. She cared for Japanese wives of American servicemen, handling tuberculosis cases and performing numerous lung surgeries. During her time at Tachikawa, wounded soldiers from the Vietnam War arrived. Medical personnel at the base triaged these patients, who would then be sent to an Army or Navy hospital elsewhere in Japan.

When Burdell Chalifour came back to the U.S. in 1963, she went to Moody Air Force Base in Valdosta, Georgia. She started on the medical ward and promoted to captain after 10 years of service. She also met Lee Chalifour, a master sergeant in the Air Force who served as a tail gunner in a B-24 ‘Liberator’ four-engine bomber in the Pacific during World War II. They moved to Tachikawa, where they married in 1967.

The couple relocated to Germany after Burdell Chalifour graduated from Chief Nurses School at Sheppard Air Force Base, Texas, in 1970. In Germany, Burdell Chalifour served as chief nurse of the 36th Tactical Medical Unit at Bitburg Air Force Base, and promoted to lieutenant colonel. In 1974, she and her husband returned to the United States. She retired four years later after 20 years of service.