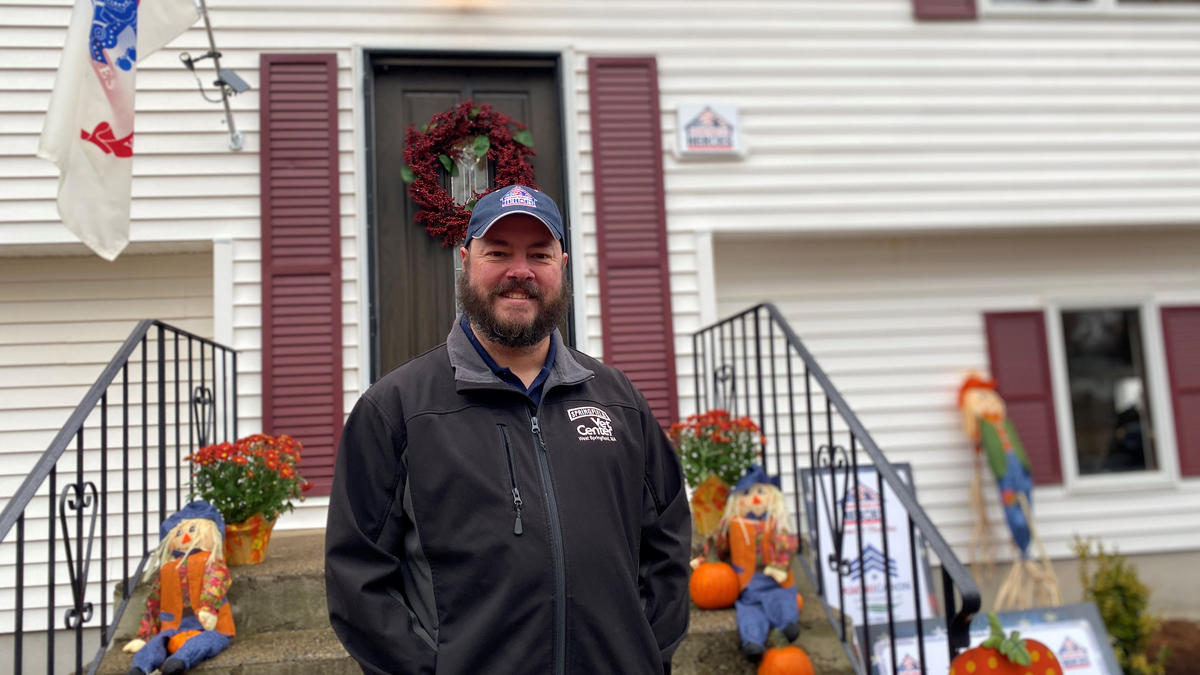 Army Veteran Craig Hall’s home on wheels is a 35-foot Mobile Vet Center for the U.S. Department of Veterans Affairs.

He drives more than 1,000 miles a month throughout the northeast attending events, answering questions about VA programs and services and helping Veterans with readjustment advice.

On Wednesday, he and his family got to see and explore their new home for the first time.

Hall, his fiancé and two children received a mortgage-free home from the national nonprofit organization Building Homes for Heroes.

Hall hasn’t had a home of his own since returning from Iraq in 2007.

More than 100 people, including community leaders, local Veterans and several of Hall’s co-workers from Vet Centers from across New England attended a special ceremony for Hall and his family. The ceremony began with a parade leading to his newly refurbished Glastonbury home.

Over the last 13 years, Building Homes for Heroes has donated 200 homes to Veterans. This year in commemoration of Veterans Day, they made a commitment to gift 11 homes in 11 weeks.

On what community leaders described as a “perfect New England day,” gray and overcast with cold rain and temperatures in the 30s, Hall choked up with emotion at his ceremony.

“Probably the second or third greatest day of my life next to my kids being born and meeting my fiancé, this is the greatest day of my life,” he said. “This is truly a monster gift I never thought I would ever receive. It’s organizations like Building Homes For Heroes that step up and do things for our combat wounded veterans, for our services members who are put in harm’s way and lift up our spirits and do incredible things like this. I’m beyond words.”

Motivated to serve after 9/11, Hall went to an Army recruiter in Springfield, Mass., and enlisted in 2005. He served until honorably retired as an Army specialist due to combat-related injuries.

Hall was a 19K M1 Abrams Tank Crew member with the 1st Cavalry Division in Samarra, Iraq, in 2007. While carrying out a mission, an improvised explosive device blew up under the tank in which he was riding. Hall lost his leg below the knee.

A native of Wales, Mass., he continues to serve as one of three Vet Center outreach specialists in New England who drive a Mobile Vet Center. He takes it everywhere, representing VA at community events, helping to connect Veterans with benefits and programs.

Craig Hall speaks to a Veteran during an outreach event.

He works closely with outreach specialists from the VA New England Healthcare System. Hall’s assisted more than 1,000 Veterans since he started with VA in 2015.

Now, when his day is done, he’ll have a new home to enjoy with his family.

Hall’s family arrived at his new home on Wednesday as part of a procession that included the Glastonbury Fire Department, Glastonbury Police Department, Miss Connecticut Acacia Courtney, Glastonbury Emergency Medical Services and a Mission BBQ truck. An honor guard contingent from the Massachusetts Military Order of the Purple Heart and Veterans of Foreign Wars led the procession.

Hall helped many of these Veterans through his VA work. They said they came down to support Hall and his family.

Hall says this incredible outpouring of support is symbolic of the love he receives from his family and the community. He said that support inspires him to continue to serve through his work with VA.

“This home has given my family what I fought to protect in the Army — true freedom,” said Hall. “I am just so grateful for everything.”