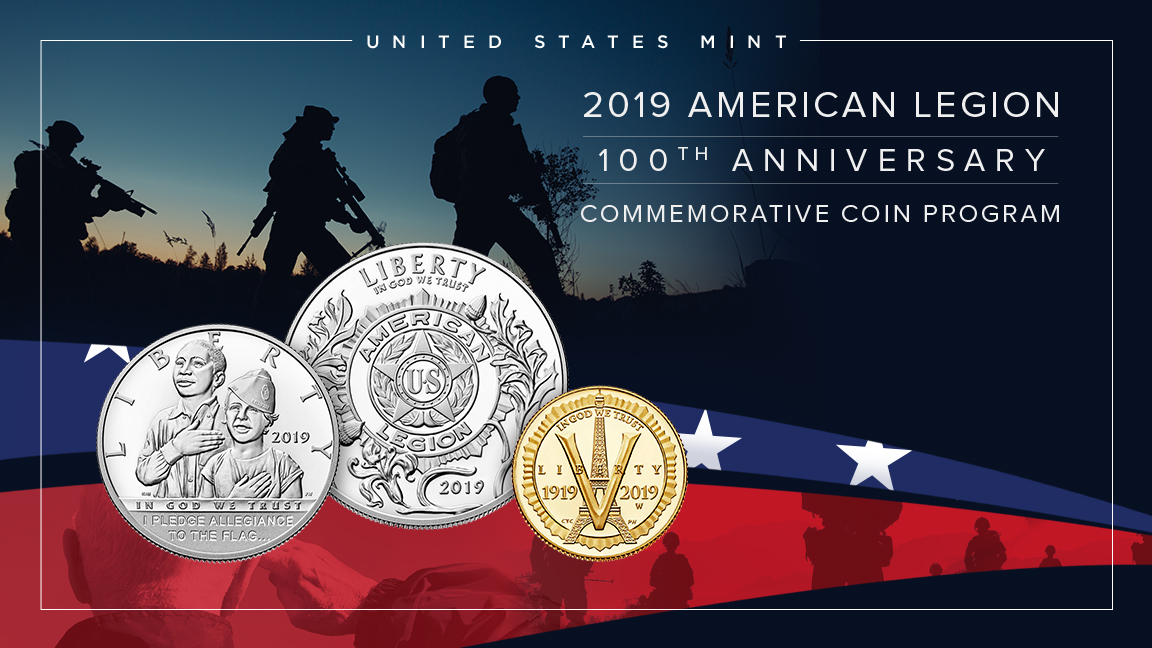 Click on the logo or visit www.usmint.gov for more information.

A coin honoring the nation’s largest Veterans group, the American Legion, is available through Dec. 27 through the United States Mint.

Proof coins are the finest coin the United States Mint produces. The term “proof” refers to the coin’s finish. Mint employees specially treat, hand-polish, and clean proof blanks to ensure high-quality strikes. For uncirculated coins, Mint employees hand-load these into a coining press and strike them on specially burnished blanks, yet they have a soft, matte-like finish appearance. Machines make these like circulating coins, but with a special process that produces a brilliant finish.

Public Law 115–65 authorized the American Legion 100th Anniversary Commemorative Coin Program. Coin prices include surcharges of $35 for each gold coin, $10 for each $1 silver coin, and $5 for each half-dollar coin. Surcharges collected from all coin sales are authorized to be paid to the American Legion. These surcharges support the Legion’s programs for Veterans, members of the Armed Forces, and other purposes specified by the authorizing legislation.

On the gold coin, the obverse (heads) design commemorates the inception of The American Legion and its mission to serve America and its war Veterans. The outer geometric rim design from The American Legion emblem, the Eiffel Tower, and V for victory represent the formation of the organization in Paris in 1919 at the end of World War I. Inscriptions are “IN GOD WE TRUST,” “LIBERTY,” “1919,” and “2019.”

Also on the gold coin, the reverse (tails) design depicts a soaring eagle, a symbol of the United States during times of war and peace alike. The American Legion’s emblem is depicted above the eagle. Inscriptions are “UNITED STATES OF AMERICA,” “$5,” and “E PLURIBUS UNUM.”

Also on the silver design, the reverse (tails) design represents the founding of The American Legion in Paris, France, in 1919. A fleur de lis and the inscription “100 YEARS OF SERVICE” is above the crossed American and American Legion flags. Additional inscriptions are “UNITED STATES OF AMERICA,” “1919,” “2019,” “$1,” and “E PLURIBUS UNUM.”

On the clad coin, the obverse (heads) design depicts two children standing and reciting the Pledge of Allegiance, the little girl proudly wearing her grandfather’s old American Legion hat. Inscriptions are “LIBERTY,” “2019,” “IN GOD WE TRUST,” and “I PLEDGE ALLEGIANCE TO THE FLAG…”

Also on the clad coin, the reverse (tails) design completes the phrase from the obverse “I PLEDGE ALLEGIANCE TO THE FLAG… OF THE UNITED STATES OF AMERICA.” The design depicts an American Flag waving atop a high flagpole as seen from the children’s point-of-view from the ground below. The American Legion’s emblem lies just above the flag. Additional inscriptions are “E PLURIBUS UNUM,” and “HALF DOLLAR.”

About the American Legion

Chartered by Congress in 1919, the American Legion started as a patriotic Veterans organization focusing on service to Veterans, service members and communities. Today, there are more than 2 million members at more than 13,000 posts worldwide. Membership is open to men and women alike, regardless of ethnic background or religious affiliation.

The Legion focuses its efforts in four areas: Veterans Affairs and Rehabilitation, Children and Youth, National Security, and Americanism. These areas are “the Four Pillars” of American Legion service.

The Legion’s advocacy on behalf of Veterans has been instrumental in the passage of numerous pieces of legislation. This includes the Servicemen’s Readjustment Act of 1944, better known as the GI Bill, and multiple legislation to advance government recognition and promote effective treatment of service-connected conditions.

The Legion has awarded millions of dollars in Child Welfare Foundation grants and college scholarships, and has implemented numerous programs and services to assist Veterans, their families, and the community.