National Day of the Horse and the 3rd Massachusetts Cavalry 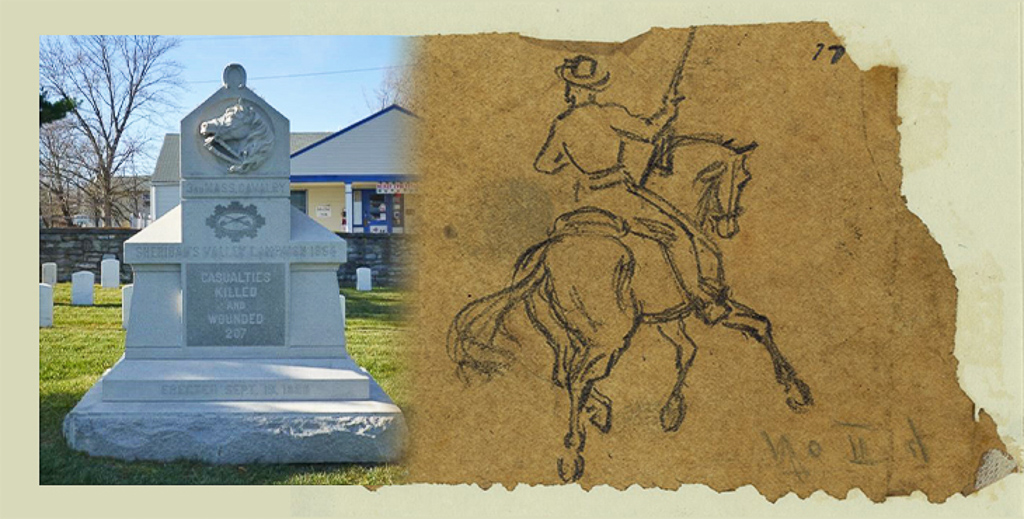 In 2004, Congress passed a resolution designating Dec. 13 as “National Day of the Horse.” This day encourages Americans to be mindful of the contribution horses have made to the economy, history and character of the United States. This was particularly evident during the Civil War, when horses and their mounted soldiers played an important role in the war.

At the beginning of the war in April 1861, most Regular Army cavalry units were on duty in the western United States. To fill this east coast void, the US formed volunteer state cavalry regiments. One such unit was the 3rd Massachusetts Cavalry, whose surviving members erected a monument at Winchester National Cemetery, Virginia. The 11-foot-tall Westerly granite monument—featuring an animated bas-relief of a horse head—is surrounded by the graves of members of the regiment who died during the Shenandoah Valley Campaign in fall 1864.

Monument at dedication – from The Third Massachusetts Cavalry in the War for the Union by Re. James K. Ewer, Company C, Third Mass. Cav., published 1903.

The 3rd Massachusetts Cavalry was formed in summer 1862 as an infantry regiment—the 41st Massachusetts. After training for several months in the state, the regiment received orders to begin moving to the battlefront beyond Washington, D.C. It left camp at Boxford on November 5, with eight companies, later joined by two companies of the 33rd Massachusetts. A month later, the troops were aboard the steamer, North Star, bound for New Orleans. The regiment moved on to Baton Rouge where they expected to engage in their first battle, but the Union forces took the city without a fight.

Remaining in Louisiana, in May 1863, the cavalry received horses and cavalry equipment, including sabers, carbines, and revolvers. Originally known as a mounted regiment, specifically “Mounted Rifles,” on June 17 the designation was officially changed to the 3rd Massachusetts Cavalry.

The Rev. James K. Ewer, a member of Company C, wrote in his history of the 3rd Massachusetts Cavalry about the problems encountered with the introduction of horses, that breaking in “their fiery steeds furnished a large amount of fun.”

I there learned for the first time to ride horseback. I was given a horse who had evidently never been ridden much. He objected to the bridle, saddle, and indeed to about everything I showed him. He seemed to have some conscientious scruples about joining the Union Cavalry. I remember the first time I tried to mount that animal. I got off as soon as I got on. I got off again. I recollect getting off that horse several times in one forenoon. I usually got off much more rapidly than I got on. It is wonderful how quickly a man can get off a horse, especially when the horse takes hold and helps.

Another soldier, who apparently had some experience with horses, told a similar story:

The horse given me was a very lively animal. He could rear and run and jump, all in quick time. I saw at once that what the horse needed was exercise. I laughed to myself as I put on the bridle, and sought to ‘tone him down.’ I didn’t laugh again for a week. He rolled me off his back in no time. Then he just got up on his hind legs, and began waltzing toward me like an infuriated pile-driver.

The regiment spent the rest of 1863 and first half of 1864 in Louisiana, part of the Army’s Department of the Gulf. After the surrender of Port Hudson, they protected telegraphic wires to maintain open communication with Baton Rouge and undertook foraging expeditions to gather fodder for the horses. In March 1864, the regiment participated in military exercises in New Orleans at the inauguration of Louisiana Governor Michael Hahn.

In June 1864, the regiment was dismounted and then equipped as infantry before moving north to join the Army of Shenandoah. From March through November, the regiment was engaged in battle as part of General Philip Sheridan’s Shenandoah Valley Campaign. Beginning with the Third Battle of Winchester on September 19 and ending with the Battle of Cedar Creek on October 19, the 3rd Massachusetts Cavalry lost nineteen killed and more than 120 wounded.

Sheridan’s army successfully pushed Confederate forces out of the valley.

The regiment would again be equipped as cavalry—though not until February 1865—and remained so until the war ended in April. While some men were mustered out at the end of hostilities, others remained with the regiment. In June they were sent to St. Louis and attached to the Department of Missouri, and from there they served at various western forts and posts. Finally, in early October 1865, the regiment returned to Boston where it was discharged. The 3rd Massachusetts Volunteer Cavalry Regiment lost five officers and 101 enlisted men were killed or mortally wounded; another two officers and 180 enlisted men succumbed to disease during the Civil War.

4. Drawing of a Union cavalry soldier – Forbes, Edwin, Artist. An Advance of the Cavalry Skirmish Line. Ca. 1876. Retrieved from the Library of Congress.

Fifteen years after the close of the war, Veterans of the 3rd Massachusetts Cavalry formed a committee to plan for a regimental monument in the Shenandoah Valley. After many years of fund-raising and a “generous gift … from the State” in 1887, the monument was carved. While some monuments were installed on battlefields, others were placed in national cemeteries. Such was the case with the 3rd Massachusetts Cavalry Monument.

A “Southern excursion” was planned for the dedication of the monument to include visits to the “Capitol at Washington D.C., the historic battlefields of the heroic General Sheridan in the Shenandoah valley; the famous Natural bridge, and the wonderful Luray caverns of Virginia.” Newspapers from Boston to York and Pennsylvania to New Orleans reported on the monument dedication, which occurred on September 19, 1888, the twenty-fourth anniversary of the Third Battle of Winchester. In addition to surviving regiment members and dignitaries from Massachusetts, the dedication was attended by Winchester officials, ex-Confederate soldiers and local residents.

Despite fighting as infantry during the Shenandoah Valley Campaign, the monument committee included the carving of a horse’s head at the top of the monument – perhaps remembering the early days when they got to know their “fiery steeds.”

Jennifer M. Perunko is a historian for the National Cemetery Administration