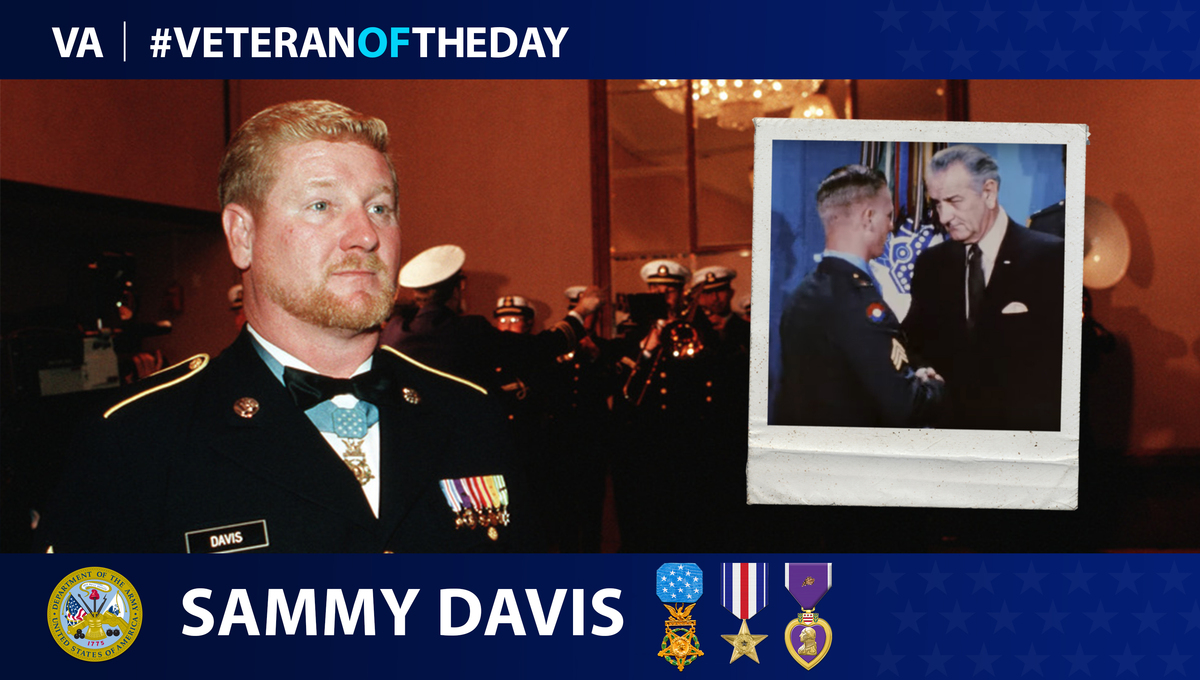 On the Army’s 245th birthday, today’s #VeteranOfTheDay is Army Veteran Sammy L. Davis, a Medal of Honor recipient from the Vietnam War.

Sammy Davis grew up in a military family and was influenced by their values. As soon as he graduated high school, Davis attempted to enlist but was told to wait until after the summer. When Davis finally went to enlist, he initially planned on joining the Navy, but he saw that the Army line was shorter and chose to enlist with them.

In November 1967, Davis’ unit received intelligence that enemy attack was “100% likely.” That night, Davis sat guard with one of his superiors and heard the distinctive sound of mortars sliding into their tubes.  This heavy mortar bombardment was a precursor to the attack of an estimated Viet Cong force of 1,500 soldiers.

Davis and his squad fired beehive rounds from their howitzers at the enemy.  When he hid behind a shield, an rocket-propelled grenade round hit the howitzer. The impact hit Davis with thousands of pieces of steel. When Davis regained consciousness, he began firing back at the enemy advance. Despite being wounded, he moved to a howitzer and began turning it around, a task that normally required four soldiers.

Under heavy fire, Davis moved into position and fired off another beehive round. He then heard a fellow soldier calling for help across the river. As Davis—who didn’t know how to swim—paddled over on a mattress, he helped save three wounded soldiers. By morning, friendly reinforcements arrived. Only 12 men, including Davis, survived from the original 42.

Upon recovery, Davis resisted a forced retirement because he wanted to return to his men. He later learned that the 11 men from the attack nominated him in for a Medal of Honor. Davis received the Medal of Honor on Nov. 19, 1968.

In 1984, Davis retired at the rank of sergeant first class. In addition to a Medal of Honor, Davis also received a Silver Star and two Purple Hearts. He said he considers himself only a caretaker of the Medal of Honor and is proud to have spoken to over a million service men and women who have held it. Davis also authored the book You Don’t Lose ‘Till You Quit Trying which is titled with his life’s motto inspired by his military service.