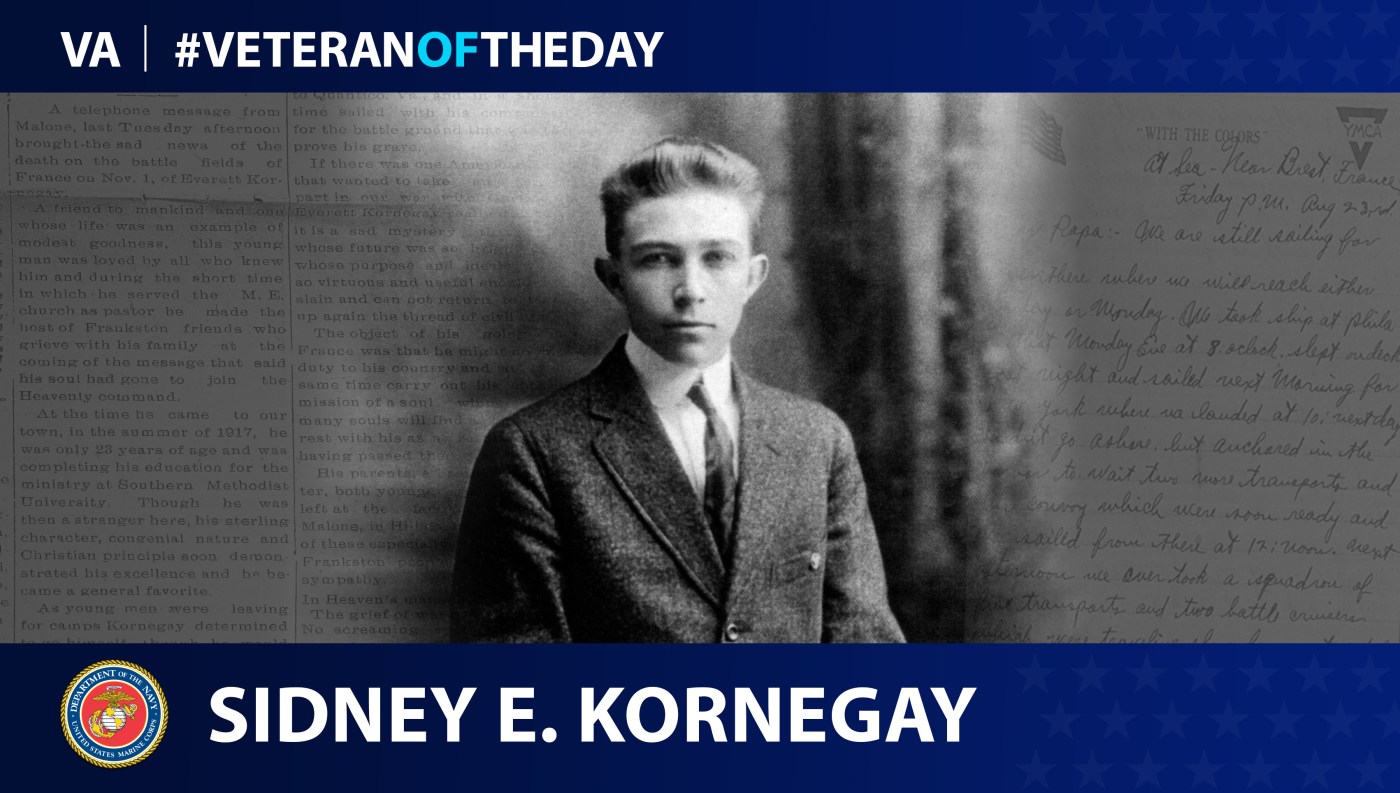 Sidney Everett “Ebie” Kornegay was born near Malone in Hill County, Texas in November 1894. Kornegay was a member of the first graduating class of Southern Methodist University in Dallas in 1917. An ordained Methodist minister, Kornegay worked for a bank and at the YMCA at an army camp.

In May 1918, Kornegay went to Houston to enlist in the Marine Corps and went to Paris Island, South Carolina for training, where he served with Company A, 3rd Battalion. While at Paris Island, Kornegay quickly distinguished himself and earned the second-highest honor for good service. On July 15, 1918, he went to Quantico, Virginia, where he and his fellow Marines trained in trench-digging, barricade and parapet-building, signal and gas mask practices, skirmish drill, and advance attacks. From there he sailed to Paris, France, where he joined the 95th Company, 6th Marine Regiment, 2nd Division, of the American Expeditionary Force on the Western Front.

After arriving in France, Kornegay served on the Western Front alongside both American and European forces at both St. Mihiel and Meuse-Argonne. While in Virginia and abroad in France, Kornegay regularly wrote letters back home to his mother, his father and his brother, in which he detailed his daily life. He also sent back rolls of film for his family to develop and keep for him upon his return. In news clippings from the time, Kornegay was described as an outstanding young man, who was known for his sobriety and his integrity.

German machine gun fire killed Kornegay Nov. 1, 1918 at Argonne at Landres et St. George, France. Kornegay received a field burial Nov. 3, 1918. His fellow Marines described him as someone who gave his life to defend his ideals and make the world a better place so that others could live in freedom.

In May 1919, Kornegay’s remains was disinterred from his field grave in Argonne et Landres and reinterred in the Argonne American Cemetery in Romagne-Sous-Montfaucon, France. In June 1921, Kornegay was once again disinterred and brought back home to Texas, where he was laid to rest in his family’s plot in Fairview Cemetery in Hubbard, Texas.

Below is a letter Kornegary wrote to his mother.