Life After Service: StrongMind technology to treat Veterans with PTSD 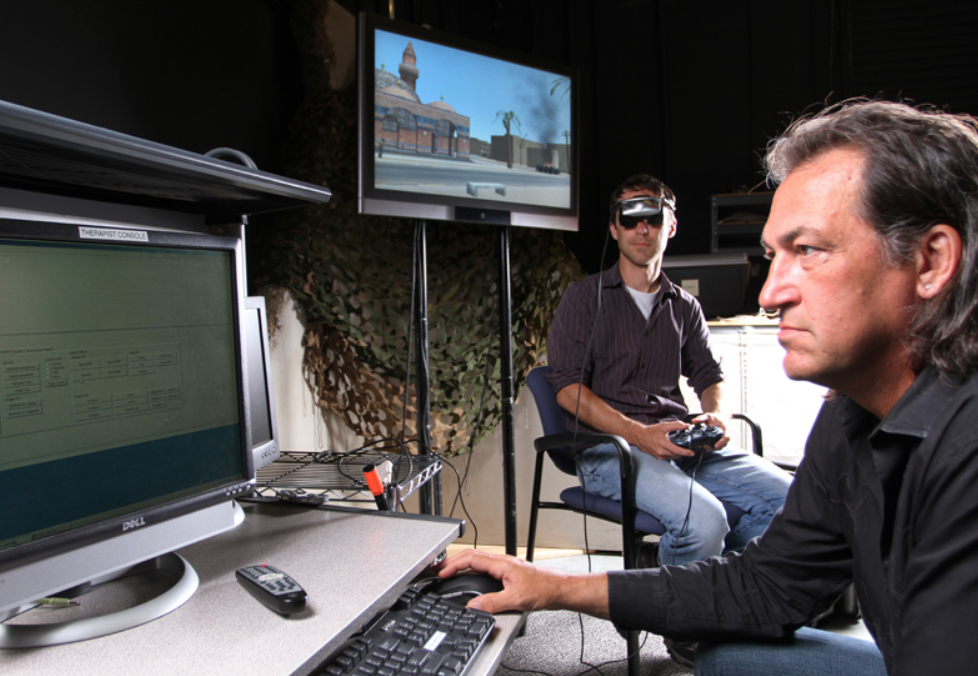 In an effort to help combat the national daily average of 20 U.S. military Veteran suicides and to offer an additional treatment solution, VA hospitals across the country have partnered with the national non-profit organization SoldierStrong to offer the StrongMind program.

StrongMind utilizes the virtual reality technology known as BraveMind. The VR technology behind BraveMind was developed by Dr. Albert “Skip” Rizzo and his team at the University of Southern California’s Institute for Creative Technologies, where Dr. Rizzo serves as the director of medical virtual reality. Due in part to the ever-growing popularity of gaming, the use of virtual reality therapy as a way to treat PTSD appeals to younger Veterans who otherwise may not be inclined to participate in traditional therapy practices.

Virtual reality can be used to deliver prolonged exposure therapy – the practice of recalling a traumatic memory while talking through the nuances of that memory with a therapist–an evidence-based method for treating PTSD. However, Veterans dealing with PTSD often find it difficult to summon specific memories of their time in the service. Virtual reality therapy makes the process of recalling such memories easier for Veterans.

StrongMind’s VR program technology creates 14 specific “worlds” of combat scenarios, from a desert roadway to a crowded Iraqi marketplace or a slum in an Afghan city. Therapists can select a specific world based on the Veteran’s traumatic experience and customize it, recreating the scene of the troubling memory in the virtual reality headset, thus placing the Veteran squarely back within the midst of that memory at a pace they can handle.

The protocol may come across as simple in writing, but as Dr. Rizzo notes, “exposure therapy can be difficult.” However, if conducted in a safe and supportive environment, in which the process is overseen by trained VA clinicians, it can help individuals confront and effectively cope with trauma-induced emotions.

“I was skeptical at first,” said Christy Tubbs, a clinician at the Syracuse VA in Syracuse, N.Y. “But it’s an enhancement to treatment that the therapist provides and it will be helping us do our jobs better.”

The StrongMind program’s efficacy stems from clinicians’ ability to customize and control the content presented in the VR headset so precisely that sights, sounds, smells, vibrations–even the weight and sensation of holding a weapon–can create a patient experience that mirrors the traumatic memory or encounter.

Soldier Strong provides virtual reality systems for Veterans suffering from PTSD at more than a dozen VAMCs across the country.

Experiencing troubling memories repeatedly in a safe environment works to reduce the brain’s response to them. This approach aims to help Veterans have greater control of their emotions instead of their memories triggering fear and anxiety.

“It gets them to talk about things they’ve never talked to anyone about before,” Rizzo said. “Those memories don’t have the same intense, painful emotional power that they did before. Patients start to feel empowered, to feel that they got it out, and that they can talk about it.”

During the last week of January, Rizzo and master clinician, Dr. Todd Adamson, conducted training sessions at the Charles George and North Texas VA centers to teach clinicians from 11 VA facilities how to use StrongMind equipment in the clinical process to deliver safe and effective PTSD treatment.

SoldierStrong, which surpassed its initial 2019 commitment to donate VR systems to 10 VA medical centers, hopes to more than double that commitment by the end of 2020. The group has already received requests for the system from eight more VA centers.

Chris Meek is the co-founder and chairman of SoldierStrong, a charitable organization committed to supporting and improving the lives of service members and Veterans. SoldierStrong provides revolutionary medical technology and advancements, as well as educational opportunities, to Veterans across the country. Meek received the President’s Call to Service Award in 2011.