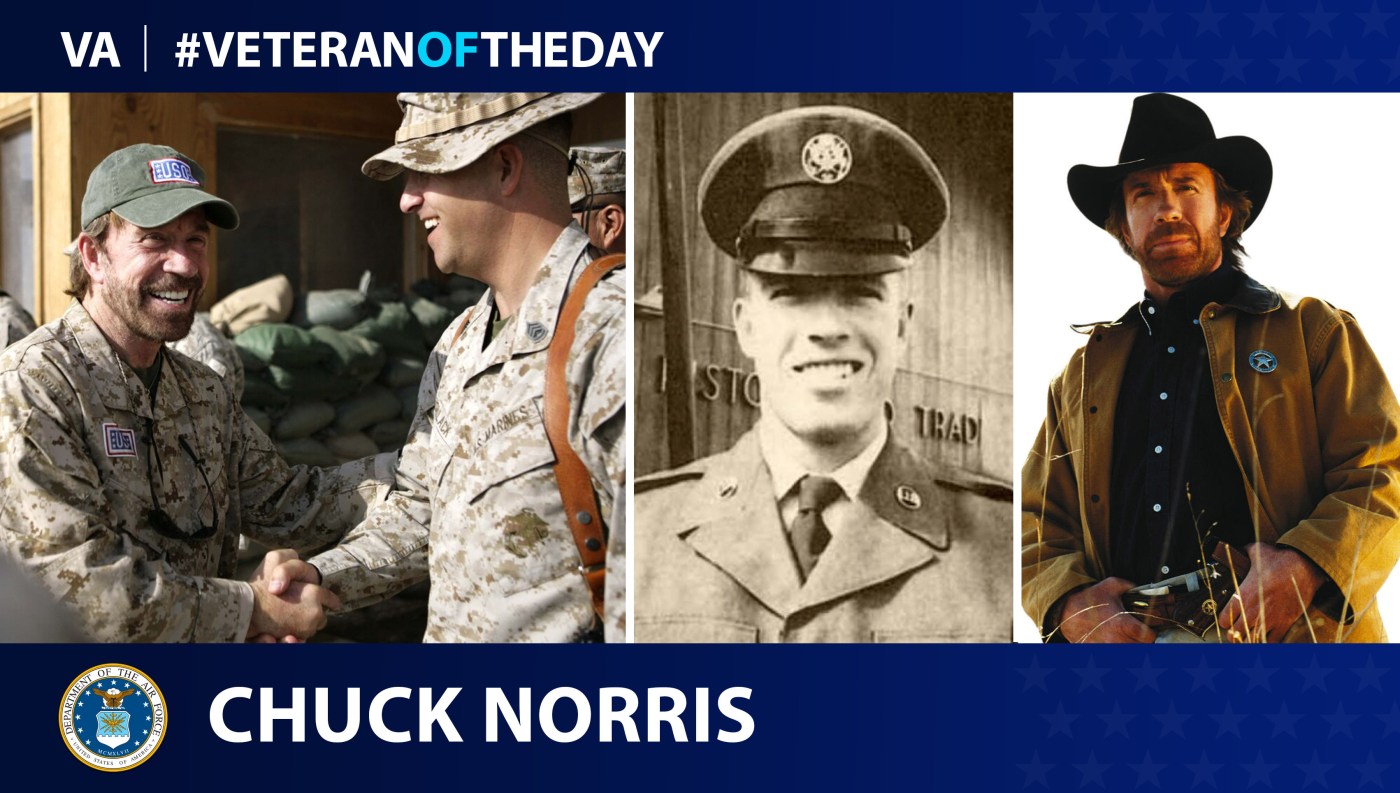 On his 80th birthday, today’s #VeteranOfTheDay is Air Force Veteran Chuck Norris, who served as air police before becoming a karate champion and movie star.

Carlos “Chuck” Norris was born March 10, 1940, in Ryan, Oklahoma. Norris enlisted in the Air Force in 1958 after graduating high school. He joined as an air policeman and hoped to train as security police. The Air Force stationed Norris at Osan Air Base in South Korea. It was there that a fellow airman gave him the nickname “Chuck.”

Osan Air Base is also where Norris picked up his martial arts skills and earned a black belt in Tang Soo Do, a form of Korean karate. Norris trained with Grandmaster Jae Chul Shin, founder of the World Tang Soo Do Association, as well as Grandmaster Do Sik Mun. After his service in South Korea, Norris served at March Air Force Base, now March Air Reserve Base, in Riverside County, California. He continued to serve as an air policeman until his discharge from service in August 1962 at the rank of airman first class.

Following his military service, Norris applied to be a police officer but ended up on the waiting list. While he waited, Norris decided to open a martial arts studio in his town of Torrance, California, which led to his opening a chain of studios. He started to enter martial arts competitions. After several years, he won his first World Middleweight Karate Championship title in 1968. Norris held the title of Karate World Champion for six consecutive years and retired after his victory in 1974.

It was during this time that Norris met Bruce Lee, which led to Norris’ breakout role as Lee’s nemesis in the 1972 film Return of the Dragon, roundhouse kicking him into stardom. Norris went on for several decades to star in action movies and television shows like Walker, Texas Ranger and The Delta Force. He also still appears in advertisements.

Norris’s brother, Wieland Norris, was killed in action during the Vietnam War. Norris dedicated his Missing in Action films to his brother’s memory.

In 2001, Norris received the Veteran of the Year award from the Air Force. In 2007, Commandant Gen. James T. Conway made Norris an honorary United States Marine. In 2011, Governor Rick Perry named Norris an honorary Texas Ranger.

Happy 80th birthday, Chuck. Do you still blow out your birthday candles with a roundhouse kick?

Visit RallyPoint at https://www.rallypoint.com/topics/chuck-norris to join the discussion about Chuck Norris.