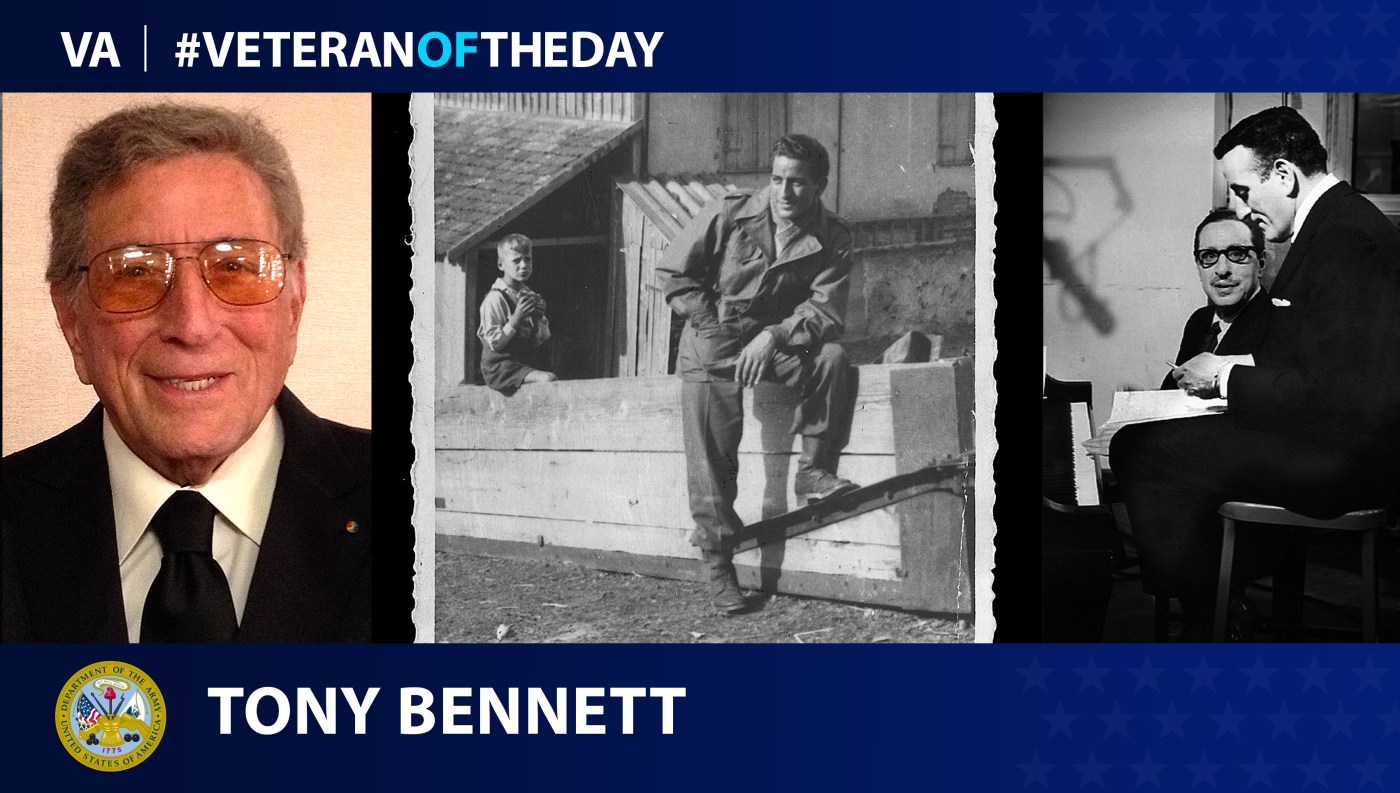 On his 94th birthday, today’s #VeteranOfTheDay is Army Veteran Tony Bennett, who served in the 63rd Infantry Division in Europe during WWII.

Born Anthony Benedetto, Tony Bennett grew up in the Astoria neighborhood of Queens in New York City, New York. His father died when he was 10. Bennett later dropped out of high school to help with family finances. As a teenager, Bennett worked as a singing waiter in restaurants. The Army later drafted him during World War II.

After completing basic training at Fort Dix, New Jersey and Fort Robinson, Nebraska, Bennett served with the 63rd Infantry Division and went to Europe in March 1945. With the 63rd Infantry Division, Bennett fought in France and Germany, quickly rising to the rank of corporal based on his experience with close combat fighting. In late April 1945, Bennett participated in the liberation of Kaufering concentration camp in southern Germany.

When the war ended in May 1945, Bennett served in Mannheim, Germany as part of the postwar occupational forces. To pass the time, he joined the informal Special Services band unit, practicing jazz standards and meeting up with other musicians in the Army.

Under the stage name of Joe Barri, he began singing for the official 314th Army Special Services Band. After returning to the United States in 1946, Bennett studied at the American Theatre Wing and formally trained as a singer. In 1949, the singer Pearl Bailey invited him to open for her show at a club in Greenwich Village. At the show, Bennett met the actor and singer Bob Hope who gave him the stage name, Tony Bennett and encouraged him to tour.

Bennett signed with Columbia Records in 1950 and started working with record producer Mitch Miller. His early hits included “Because of You,” “Cold, Cold Heart” and “Rags to Riches.” By the late 1950s, Bennett created jazz albums and worked with jazz legends like Count Basie, Basie Swings and Bennett Sings. But it was the 1962 debut of “I Left My Heart in San Francisco” that brought Bennett national attention. “I Left My Heart in San Francisco” led to Bennett’s first Grammy Award for Best Record of the Year and Best Solo Vocal Performance.

To date, Bennett has won 20 Grammy Awards, the Grammy Lifetime Achievement Award and two Emmys in his singing career.