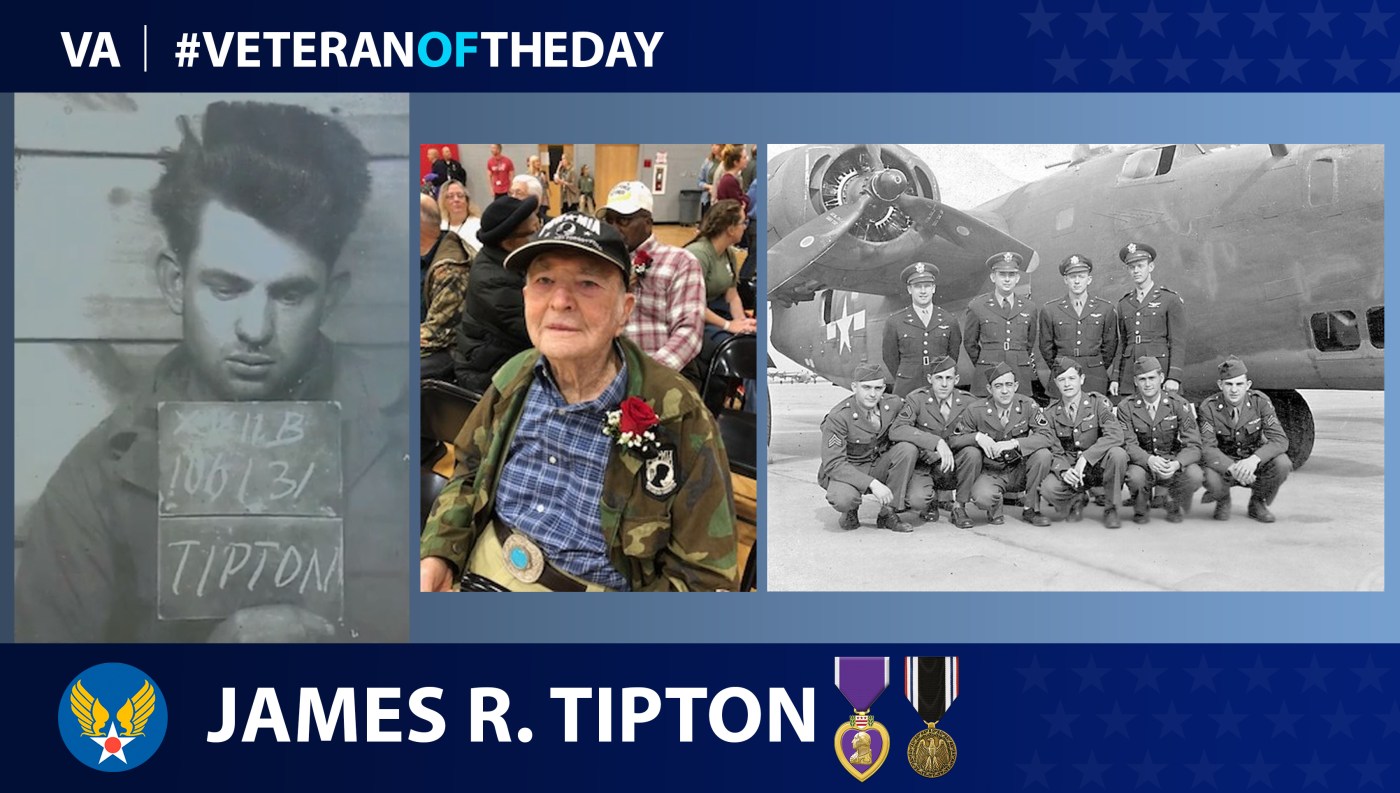 Today’s #VeteranOfTheDay is Army Air Forces Veteran James R. Tipton, who was captured and held as a prisoner of war for 13 months during World War II.

James R. Tipton grew up in Union City, Kentucky. Before joining the Army Air Forces, Tipton helped build part of the Blue Grass Army Depot, a U.S. Army storage facility. He later got a job at the Army Depot, which provided ammunition, chemical defense equipment and ammunition support for the beginning of World War II.

Tipton was living at home, helping his father around the farm when the United States entered World War II. On Dec. 1, 1942, he enlisted with the Army Air Forces and went to Miami Beach, Florida, for basic training. After training, Tipton qualified as a waist gunner with the 713th Bomb Squadron, 448th Bomb Group, 8th Air Force. The 448th Bomb Group was a B-24 Liberator Group that was stationed overseas. The Group entered combat on Dec. 22, 1943. For the next 18 months, they flew 262 missions over occupied Europe.

On April 1, 1944, Tipton’s squadron was ordered to bomb the largest chemical plant in Ludwigshafen, Germany. The 713th Bomb Squadron took off from Norfolk in their B-24 Liberator, nicknamed “Black Widow.” Flying over Halinghen, France, the bomber experienced a fuel breakdown. At 10,000 feet, realizing oxygen levels were dangerously low, Tipton and the crew decided to jump out of the plane. At first, Tipton thought he was heading towards an open field, but as he got closer to the ground, he noticed power lines under him. He passed out before hitting the ground.

The Germans captured Tipton and the crew, taking them to a camp in Austria. When Tipton was first photographed by one of the prison guards, he had not been able to shave, brush his hair or eat in over a week. His parents soon received a telegram from the Adjutant General informing them that their son had been missing over the European area since April 13, 1944.

After 13 months, the Germans released him. He honorably discharged Oct. 15, 1945, as a staff sergeant. During his service, Tipton earned a Purple Heart, an Air Medal and a Prisoner of War Medal.

At 95 years old, Tipton lives in Waco, Kentucky, less than 10 miles from where he was born. He is one of the few remaining prisoners of war from a group that met once a month.