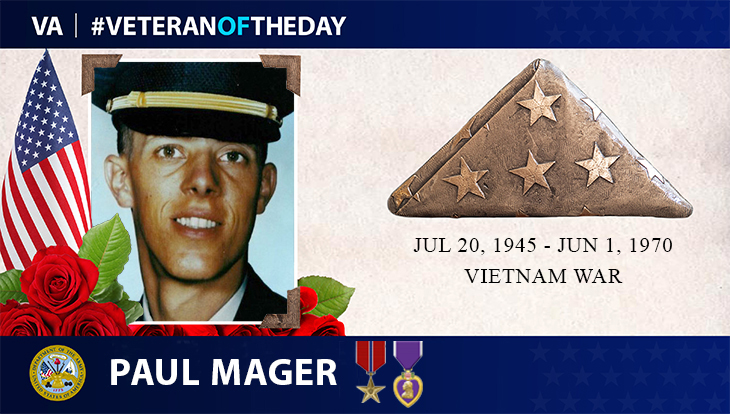 Today’s #VeteranOfTheDay is Army Veteran Paul Magers from Billings, Montana, who was missing in action and later declared killed in action in Vietnam.

Paul Gerald Magers joined the Army in 1969 and graduated from Officer Candidate School at Fort Benning, Georgia, in January 1970. He graduated from Helicopter School in October 1970 and the Rotary Wing Aviator Course in February 1971 at Fort Rucker, Alabama.

Magers, left for Vietnam May 12, 1971, where he served with the 158th Aviation Battalion, 160th Aviation Group, 101st Airborne Division in Quang Tri province.

On June 1, 1971, his second week in the country, Magers and Chief Warrant Officer 2 Donald L. Wann flew with other aircraft to a hill near Dong Tri where a team of Army Rangers awaited rescue. Their mission took them about five miles east of the border with Laos and 20 miles south of the DMZ. Magers and Wann hovered overhead in their AH-1 Cobra gunship while another helicopter extricated the Rangers.

The Rangers left behind claymore mines that Magers and Wann attempted to destroy. As they dropped lower, fire from an enemy position hit the underside of the helicopter, causing a fuel leak that ignited. Their helicopter crashed into a slope.

According to the POW Network, all witnesses said nobody survived the crash. The military listed Magers and Wann as Missing in Action (MIA) until 2009 when a Vietnamese excavation team discovered remains from the crash site. The Defense Prisoner of War and Missing Personnel Office identified the remains of Magers and Wann.

For his action, Magers was awarded a Bronze Star Medal and Purple Heart.

He was laid to rest in 2010 at Yellowstone National Cemetery in Laurel, Montana, Section A, Row 2, Grave 4.