Home / Veteran of the Day / #VeteranOfTheDay Army Veteran Cody Board 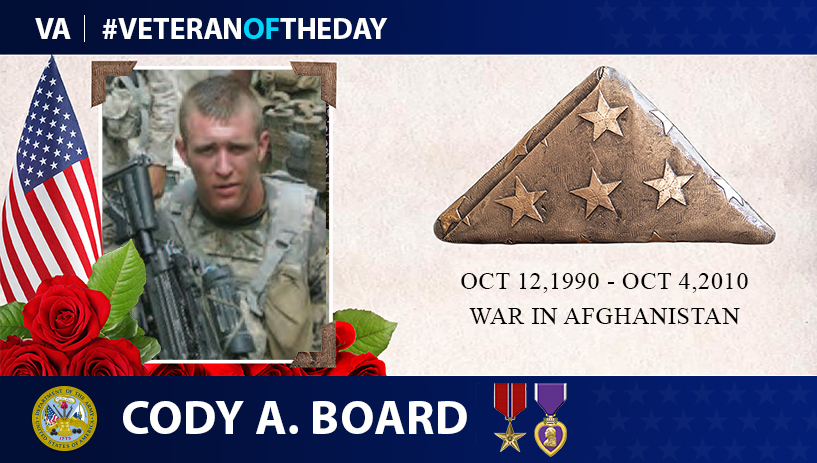 Today’s #VeteranOfTheDay is Army Veteran Cody Board from McKinney, Texas, who was killed in action in Afghanistan in 2010.

Cody A. Board was born in an Army hospital Oct. 12, 1990, in Fort Sill, Oklahoma. In an interview with The Dallas Morning News, Board’s father said his son decided on serving in the Army, just like his father, uncle and grandfather.

Board attended McKinney North High School in Texas, where he placed in the top five at wrestling regionals in the 130-pound weight class. He also was part of the school’s cross-country track team. His father, a West Point graduate and Desert Storm Veteran, urged his son to explore all military options when he graduated from high school in 2009.

After basic and advanced individual training, Board served with 3rd Platoon, Apache Company, First Squadron, 2nd Stryker Cavalry Regiment, in Vilseck, Germany. He died Oct. 4, 2010, insurgents attacked his unit with an improvised explosive device. Board died at Mirwais Hospital in Kandahar, Afghanistan, after he succumbed to his wounds. He was just short of his 20th birthday.

Board posthumously received a Bronze Star Medal and Purple Heart.

He is interred at Fort Sill National Cemetery in Oklahoma, Section 3, Site 977.